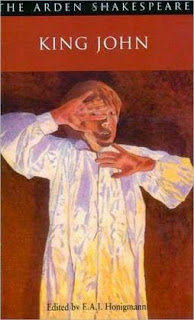 I have been looking forward to the upcoming Stratford Festival screening of King John for several reasons, but especially since I've only seen it once. The play can be described as erratic, but there are some wonderful moments in it. The selection of incidents Shakespeare includes in the play brings home the parallels between the reigns of John and Elizabeth I, which was an edgy move, if not dangerous. In the Introduction to the second Arden series, E.A.J. Honigmann summarizes the similarities in an extended sentence:

An English sovereign, said to be a usurper, and perhaps a bastard, defies the pope, becomes "supreme head," is excommunicated, imprisons his rival, who was barred from the crown by a will; the pope promises his murderer canonization, invites another king to invade England, the English sovereign darkly urges the murder of the rival "pretender," then needs a scapegoat, a foreign invasion is attempted, the invaders intending to kill the Englishmen who help them, their navy is providentially wrecked off the English coast, English unity being finally achieved through the failure of the invasion:—frequent "Armada idiom" hammering home the topicality of the play. (xxix, line references corresponding to the events/incidents omitted)

Some of John's history had to be "adapted" to fit into this framework, leading to an often-made claim that King John is Shakespeare's most unhistorical play." By adding ahistorical events and rearranging things that did happen to fashion a coherent, compressed play, Shakespeare highlights Elizabethan experiences. There's an interesting question Shakespeare seems to address when writing the play: should he attempt to make King John appealing?

For a few short moments here and there, Shakespeare succeeds in making a likable (but definitely not a lovable) King John. Sure, he's self-absorbed and mercurial. (When I get around to posting on the 13th-century work Histoire de Guillaume le Mareschal, as promised here, these features of the monarch shine through quite well.) And the John that appears in Holinshed's Chronicles, one of Shakespeare's sources and clearly echoed here, has a king of impetuous desires and unceasing lies. In the play John attempts to buy off everyone, providing a backdrop for the "commodity" speech. His schemes may succeed in the short term but bankrupt him, and nearly the country, in the long run. He attempts to hide from the results of his disastrous commands. But there are flashes, brief though they may be, where it's fun to watch John work. His judging of the family matter at the beginning of the play and the brief moment when things are looking up for him at the center of the play (in III. ii where the French have been stopped, he escapes from his mother's smothering care, and he has Arthur in his control) provide shining moments for the king. But only moments. Immediately after his apparent successes he attempts to talk Hubert into killing Arthur. Then Randolph, in a "prophetic spirit," lays out the destruction that awaits John.

The only time I've seen this play is the 1984 performance from the BBC series of Shakespeare's plays. Leonard Rossiter, in one of his last performances, does a good turn at King John while George Costigan brings out the playfulness of The Bastard/Philip. My major complaint about this version is the shortening of the dungeon scene, one of the best parts of the play.

Details of the upcoming screening of last year's Stratford Festival can be found here. Folks outside the U.S. may want to go to the Stratford Festival's website, too. According to this write-up, the sound should be just as good as the picture, one of my complaints about the screening of King Lear I saw, which did not take advantage of the theater's sound system. I'm hoping that's fixed...I'm going to the same theater as Lear, so we'll see. Anyway, I hope you're able to see it! 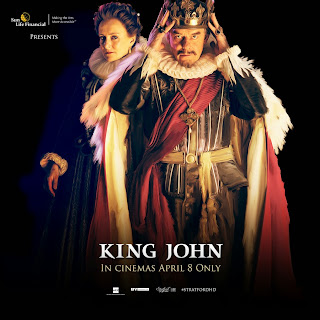 Details on the screening
Posted by Dwight at 4:34 PM