The Death of Caesar by Barry Strauss 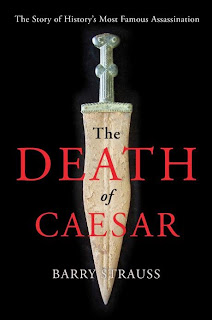 
I'm rushing through this post since I want to post it on the Ides of March (and I just finished the book)...

Barry Strauss, professor of history and classics at Cornell University, has provided an insightful study of the actions, motivations, and fallout of the murder of Julius Caesar, "history's most famous assassination," as the book's subtitle puts it. One of the most intriguing features of Julius Caesar's assassination that Strauss investigates is how so many people around the ruler with varying backgrounds—friends and enemies, beneficiaries and slighted, and family members—formed an alliance to commit such a high-profile murder. The plotters may have provided heroic rationales and excuses but it becomes clear there were plenty of self-interested reasons. Strauss stresses the importance of Decimus (Decimus Junius Brutus Albinus) as one of the principle conspirators along with Brutus and Cassius. In addition to persuading Caesar to attend the Senate meeting on the Ides of March 44 B.C., Decimus provided gladiators as (apparent) guards for Caesar, but would in reality prove to be the assassins' bodyguards. Decimus was quickly demonized and then largely dismissed or forgotten by later generations of history writers. The allegiances between the principle characters, including Caesar, his supporters, and his detractors, tends to be extremely fluid. As becomes abundantly clear, "For the Romans, as for most people, principle and profit were inseparable." For many of the principle characters, you could add the importance of dignity as well. What motivated the conspirators will remain conjecture, but Strauss delves into many aspects of their lives and the political climate in Rome, finding interesting tidbit feeding into a broad, swirling pattern. Interestingly enough, as Seneca would later put it, there were more friends of Caesar conspiring to kill him than enemies.

While covering earlier and later events, the book focuses on the time period starting with the return of Julius Caesar to Rome in August 45 B.C. after the Battle of Munda in Hispania and goes through the deaths of the main conspirators, ending with the suicide of Antony and the ascension of Octavian to Augustus. There were major changes in Rome between August 45 and February 44 B.C., when the assassination plot probably began. These events affected both the conspirators personal beliefs, reacting to what they were seeing unfolding, as well as the overall political outlook of the public. Several changes would highlight contradictions in what Romans professed and how they acted, while other events coincided with the claims of protecting the Roman Republic from a tyrant.

Many of the conspirators seemed to truly want peace, hoping that things would quickly return to normal (or at least what they hoped to be a new normal) after the assassination, acknowledging they would need to wage a public relations battle in addition to the actual murder. Many of their actions seem to bank on the public's desire for peace, or at least their weariness over the (mostly) finished civil war. One of the strong points of the book is the almost hour-by-hour recounting of the events during the Ides of March, covering many topics to make the events come alive: what type of daggers were used, what it would take to drive them into the body of a man, the palpable fear present in Rome at the time, the confusion in the close-quartered commotion following the murder, and the assassins' trek afterwards. 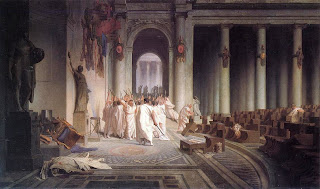 
Once Caesar was dead, the conspirators hoped to rally support for their cause and have the Senate take control of the Republic. One important consideration that the conspirators didn't fully appreciate was the presence of numerous soldiers and veterans inside and just outside Rome. Most of them were about to head out to assignments or their new properties, but their loyalty would be a major issue. The misreading by some of the conspirators of what it would take to earn/buy the soldiers' loyalty closed a brief window of opportunity, although to win such support was paradoxical to their stated aims. Buying off the soldiers for their support would raise the specter of a military dictatorship they claimed to be fighting.


Caesar was dead but Caesarism lived on. That was the secret of Roman politics that was revealed in the third week of March 44 B.C. The Senate still met and issued decrees. The people still commanded enough respect that the magistrates courted them in public speeches. Yet, in the final analysis, it was Caesar's veterans converging on Rome with their weapons who had the last say. They might have forgotten their loyalty to Caesar if the assassins had paid them a bonus or increased their land allotments, but the assassins offered too little to win their trust.

Killing Caesar would have only been the first step in defeating Caesarism. But in order to defend the Republic an army was needed, a paradox that may have doomed the conspirators' stated goals from the start. The conspirators started a revolution, whether they realized it or not, and (as Strauss puts it) moderation has no practical place in such a situation. Caesar had his finger on the pulse of Rome, understanding its violent nature and harnessed it for a while. The winner of the fallout from Caesar's murder, as Strauss shows so well, would be those that could likewise harness or tame that violent nature as needed.

I enjoyed the book and how Strauss presented and paced the story, alternating between different points of view and introducing characters, relationships, events, etc. as appropriate. I found myself unable to put it down at times, wanting to see what would happen even though I already knew exactly what was coming. The book has several things I find useful in such historical recounting, notably a cast of characters section and several well-done maps. Something I look forward to delving into more is the "Notes on the Sources" section, particularly the "ancient sources" notes. During the book Strauss does a wonderful job of laying out these sources, discussing their biases, and lining up where they agree with or differ from one another. One source Strauss stresses is that of Nicolaus of Damascus,


who sometimes offers Augusts's version of event. As [Mark] Toher argues, Nicolaus was a student of the writings of Aristotle and Thucydides, two of the ancient world's finest minds when it comes to political analysis. I am convinced that Nicolaus offers information essential to making sense of the assassination.

The story of Caesar's assassination turns out to be a fantastical epic, and Strauss removes much of the fog from later presentations (including Shakespeare's play) to try and understand what exactly happened and why things happened as they did. He provides a short section musing on whether or not the Republic could have been saved. Strauss believes it could have, but what would have had to happen seems like a long, improbable list contradicting much of what he presented earlier. But then these were monumental, improbable times with events unfolding on a grand scale. Who could put a limit on what was and wasn't possible during these events? Extremely well done and thoroughly enjoyable. Very highly recommended. 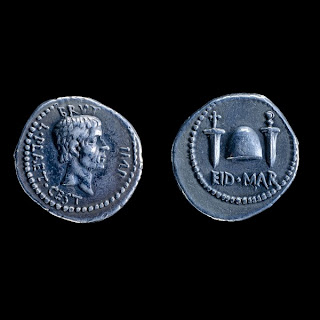 About the coin shown above:


Writing centuries later, Dio offers an identification of the two military daggers, making this one of the few coins mentioned by an ancient writer:


In addition to these activities, Brutus stamped upon the coins which were being minted in his own likeness with a cap and two daggers, indicating by this and by the inscription that he and Cassius had liberated the fatherland."

In short, the two military daggers are meant to represent the weapons used by the two leaders of the anti-Caesar movement on the Ides of March. Even for a gathering of soldiers, this was blunt.

... [T]hrough imagery this coin argues that the Ides of March was an honorable act carried out by the tools of Roman soldiers, as the military daggers show. It was an act not of murder but of liberation, as the freed-slave's cap shows.