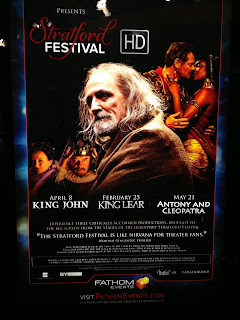 This was the first screening of the Stratford Festival HD: From Stage to Screen Series that is now underway. They intend to offer 38 of Shakespeare's plays...similar to that of the BBC's Shakespeare project from 1978-1985 plus Two Noble Kinsmen. If last night's show is any indication of the quality of the series, I am all for it.

The intent of the movie was to capture the stage experience, although I understand there were some re-shot scenes following the live performance. All in all, it provides a great cinematic experience of watching the play. The only problem I had with the movie version was the sound was...well, not lacking, since it was adequate. But it was simple stereo. I know it's a lot to ask for, but I'm hoping future screenings take better advantage of movie theater sound systems.

In Shakespeare: The Invention of the Human, Harold Bloom starts his chapter on King Lear with "King Lear, together with Hamlet, ultimately baffles commentary." If that's the case, that should have been the end of the chapter. But everyone who experiences the play, reading or watching it, seems to feel the need to expound on it (and Bloom did for another 39 pages). I'll keep my comments on this production to a minimum.

Colm Feore was one of the best Lears I've seen. His lucid moments were perfect, and his madness wasn't an over-the-top production. It helps that he was supported with a solid cast. I enjoyed Stephen Ouimette’s Fool, who seemed righteously and rightly pissed. Steven Wentworth as Gloucester drew a nice parallel with Lear, although the rating on his dive from the "cliffs" would probably rate only a 6. The three sisters (Maev Beaty’s Goneril, Liisa Repo-Martell's Regan, and Sara Farb's Cordelia) make you wonder why Lear hadn't gone mad before the play even starts. Well, except for Cordelia, although it may have been Sara Farb I fell for...I can never tell in these matters. Brad Hodder as Edmund and Evan Buliung as Edgar played off each other quite nicely. The full cast list can be found here.

One of the outstanding things about the staging was how unremarkable it was. There seems to be a big debate on whether King Lear is better read than acted, but what I liked about the sparse sets (and the great camera work) was that it allowed the viewer to focus on the language. They seemed to take the attitude that there doesn't need to be a lot of showy acting or special effects to get the full impact of the play across to the audience, to which I thank them.

Next up in the Stratford Festival series is King John on April 8. I will be posting a reminder as the date gets closer.


Update (4 March 2015): There were several articles about the film and quotes from the festival's executive director. I'll just link to this one.
Posted by Dwight at 9:16 AM

I'm glad to see this gets your approval. I'm looking forward to "Anthony and Cleopatra," which is a great play but I've never seen it properly cast. All of these Stratford Festival productions are showing in Seattle, about which I feel quite fortunate.

I'm looking forward to A&C, too. I don't think I've ever seen it, so I won't have anything to compare it to.

I feel fortunate as well. I have to drive a little bit, but it's not too bad. Including me I think there were only 15 people in this huge theater. It almost felt like my own personal screening.

Thanks for this Dwight. I will likely watch this. King Lear is such a favorite of mine.

The debate as to whether Shakespeare is better read or performed is interesting. My contention is that nether is "better" and to fully appreciate his works one needs to do both.

I love Bloom's commentary on Shakespeare. I recall the commentary on King Lear that your refer to as being so enlightening and interesting.

I just had to poke fun at the comment that it baffles commentary...but obviously doesn't stop you from commenting on it. At length.

I remember liking A.C. Bradley's lectures on Lear, too. He delved into a lot of the errors, inconsistencies, etc. of the play, but why they don't really matter. And I note that his book is currently free for Kindle (Shakespearean Tragedy Lectures on Hamlet, Othello, King Lear, Macbeth).