"The Balcony" by Jean Genet by The Collected Works 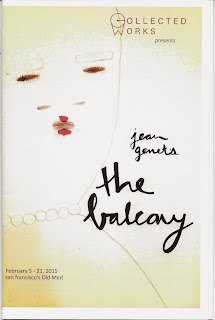 Saturday evening my wife and I went to see The Collected Works present "The Balcony" by Jean Genet. I've never completely connected with the play, although I do enjoy certain parts of it. I think my hesitancy with the play is in the randomness (for lack of a better word) in parts of it, a trait highlighted in some of Genet's notes on "How to Play the Balcony", such as this one: "Between Irma and the Chief of Police, their brief moments alone should reveal an old tenderness. I don't know why." (translaion by Jason Araujo)

A synopsis of the play:
Most of the play takes place in a brothel called The Balcony. The time and place are not clear, but Genet said he had the Spanish Civil War in mind when writing it. In the brothel run by Madame Irma, clients allow their fantasies to run rampant, satisfying more than just their sexual appetites. The fun with smoke and mirrors is kept alive until a rebellion cuts the house off from the rest of the city while everyone in the brothel await the arrival of George, the Chief of Police. It doesn't help Irma's business when a former employee, Chantal, runs away with a plumber and ends up becoming the face of the rebellion. When the rebellion fails, the Court Envoy, wishing to maintain consistency, 'coronates' Irma as queen and employs certain of her clients to carry out their fantasy roles in real life. The public buys it with help of a fawning media, but conflict arises between the clients and Irma & George regarding the use and sources of their new-found power. 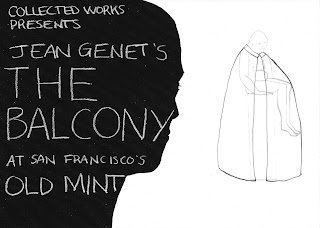 A few notes on this production:

The play was held at The Old Mint in San Francisco, and the building (completed in 1874) was part of the presentation. The first four scenes were held simultaneously in different parts of the basement, allowing us to wander in and out of different clients' fantasies. In the meantime sounds of the rebellion and screams filter in to the different rooms. Or are some of the screams coming from other rooms? I loved this part of the play and thought it a brilliant use of the building. The feel of the old rooms and vaults added to the fantasy feeling of the play. The emphasis on security (such as the "Bishop" wanting to make sure the doors were locked, sealed, shut, etc.) becomes magnified when scenes are taking place in former bank vaults.

The audience followed the action through the building, allowing us to feel like we were visiting different parts of the brothel. Instead of waiting through a scene change, you just walked down the hall to the next scene. But at just over two-and-a-half hours running time, I needed a break. The continuity, though, did allow for the tension and power of the play to build nicely. I was exhausted when the play finished.

This production included the scene from Genet's second version of the play, which provides more insight into the revolutionaries. This insight works both for and against those in the rebellion, showing both personal worries alongside blind cant and desire for personal gain.

Ryan Tacata almost stole the show as Carmen, the former prostitute turned accountant for Irma. His take on the role brought out (and added to) the humor in the play. And I'm not in love with his performance just because he put his arm around me while cooing some of his lines. No, not at all. Val Sinckler hit the right notes as Madame Irma, especially in her transformation from madame to queen. Scott Baker as the Police Chief played the role to its cock-sure hilt, fully showing his awareness of the role in the game that he and the rebels played.

The scene where media photographers take pictures of the false Bishop, Judge, and General (helping the old order to be restored after the rebellion failed) was played in a large hall where the audience had to look up to the balcony at the characters. It was a simple touch but very effective in a powerful scene. The Court Envoy responds to the photographers actions, "A true image born of a false spectacle." In such a setting we were part of that spectacle.

In my previous post on "The Balcony" there are additional links to The Collected Works' site. It's well worth your time to explore their site. 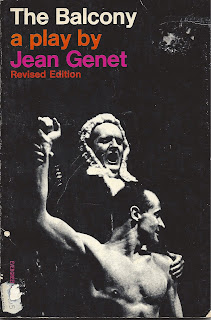 My used copy (as purchased) of "The Balcony"
Posted by Dwight at 5:24 AM