Princess Ivona at The Collected Works 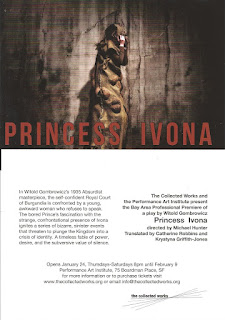 Publicity card from The Collected Works' production of Princess Ivona

Saturday night my wife and I attended The Collected Works’ production of Witold Gombrowicz’s Princess Ivona at the Performance Art Institue in San Francisco. I provide a cursory overview of the play in this post.

As a director, I know a good play through working with it, and Gombrowicz’s script has continue to astonish me in its careful and imaginative plotting, it’s strange and rich characters, and it’s focused pursuit of some of the philosophical questions that would haunt Gombrowicz throughout his lifetime. Perhaps the strongest of these is the way the human being is constantly pulled between two poles: conventionality on one hand (or what Gombrowicz would call form); and pure freedom on the other. The former is necessary if one is to be recognizable to an other, to be a social being; but it can also calcify into something rigid and dead, limiting our human capacity for surprise, experiment, and imagination. But pure freedom, however enticing it may be as a horizon of possibility, is also chaos; and if it’s even possible to attain it for a moment, one can’t live in it.

(From director Michael Hunter’s notes on the play)

Michael’s summary captures the heart of many of Gombrowicz’s works, including Princess Ivona. The play takes turns being funny, menacing, absurd, and heartbreaking—oftentimes several of these sensations at the same time—and it’s to the company’s credit that they were able to capture with intensity of all of these feelings. In some of the posts on the company’s blog, Renu Capelli, the assistant director, looks at possible considerations within the text and ways to read the play. I want to focus on the following quote, though:

As we become more and more familiar with the text of Princess Ivona, I've been struck by the several (plural, contingent, dynamic) philosophical questions that it sets aloft, about personality, about freedom, about love, about fear, about how broader social contexts shape and then beguile the infrastructure of personality: family, status and class, proximity to powerful agents, proximity to radically different versions of power...these relationships are the "stuff" of the play, even as they are made restless and anxious by the appearance of the "sluggish" Princess Ivona (in part it's her non-participation in all of that, which seems to make everyone else's neuroses sparkle and pop). But, on first gloss, it would seem that the play's fascinating explorations into profound internal terrains remains the privilege and the agony of those characters who already have a certain access to complex personhood: as if identity crises are the privilege of the privileged.

She nails the “stuff” of the play and Ivona’s impact. Reread the last bit with “should have” instead of “already have” and you’re back to Gombrowicz’s use of forms. In the world of Princess Ivona members of the court are supposed to be ‘betters’ and complex people but their frivolity barely masks simple monstrous passions. Prince Philip endorses Renu’s last point when he notes that privilege has…well, its privileges (at least when it comes to handling misery, although more is implied). Ivona doesn’t have that luxury.

When watching a play I’m interested to see what I pick up differently from the page. A question occurred that I hadn’t thought of earlier—why does Ivona choose to speak when she does? Sometimes she defends herself. Other times she speaks in riddles, which the other characters either dismiss or invest with deep meaning. Occasionally she answers a direct question. But with my question, I’ve been transposed into the world of the court—I’m trying to impose my need for rationality on Ivona. Fortunately I didn’t feel the need to kill her (like several of the characters in the play). But there is an uncomfortable point to the play I didn’t pick up in the reading. We watch the play and laugh along at the jokes and taunts, just like the court does with Ivona. Once again we’ve entered the world of the courtiers, acting and reacting in a similar manner, although I have the excuse that I know I’m watching a play. It’s a troubling short step between the two worlds, though.

Meredith Axelrod provided the music at various points in the play, her specialty in pre-1930s pop music fitting perfectly. The first act takes place in the foyer as the actors mingle with the audience. (This wasn’t the only mingling during the evening.) The first few lines of the play were a little rough, probably because of that interaction, but the troupe quickly found its rhythm. The last three acts take place in the main section of the warehouse—‘cavernous’ might be too strong a word for its roominess, while ‘spacious’ doesn’t capture the feel. The company took full advantage of the space, although sometimes to the detriment of the audience. With action taking place at both ends of the ‘stage’, 60+ feet apart, you had to continually turn your head to catch what was happening in both places. Where the use of the entire space worked perfectly was with projections on the warehouse walls. During the final scene, imaginative projections of a raucous feast filled the walls while the ensemble recited the closing lines. I say recited because it was a flat reading of the lines—maybe meant as a simple narration to accompany the rollicking/sinister scenes on the walls? Whatever the reason, I loved the imagery and the final image sticks with me.

Speaking of imagery, if you use Facebook be sure to look up the Princess Ivona (by The Collected Works) page for some great pictures of the play.

Since I was familiar with the play I focused on the interactions between the actors and was impressed by the chemistry present in the new company. With only a few spoken lines in the play, Tonyanna Borkovi did a wonderful job in the difficult role of Ivona, portraying someone that has to be a blank slate for the characters’ projections in addition to being repulsive. Not to slight anyone else—they all did well in their roles, many of whom had to go from absurd to serious in a few seconds (see the cast and crew page for a full listing). Prince Philip's line "Do you know the sudden transition from frivolity to seriousness. There is a holiness to it. It's a revelation." captures what the actors had to accomplish. There were several moments where things were rough around the edges and a few missteps, but surprisingly few given the newness of the group. My only regret during the evening was that we had to leave immediately after the performance. I have to thank Michael Hunter for the kindness shown to us during the evening and answering my many questions. I look forward to seeing what The Collected Works does next!

Additional pictures of the production taken by Jamie Lyons can be found here. 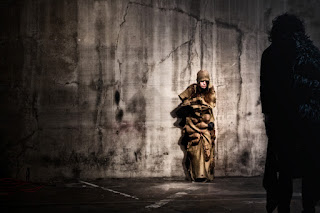