I am supposed to attend a performance of Princess Ivona (the English title) by Witold Gombrowicz this weekend and I wanted to write about the play in advance. For the record, there will be lots of spoilers in this post.

Gombrowicz wrote Ivona, Princess of Burgundia from 1933 to 1935 and it was first published in 1938 in the Polish literary journal Skamander. According to the chronology in Gombrowicz’s Diary it was noticed by one critic. Gombrowicz later provided a summary of the play:

The tragic-comic history of Ivona can be summed up in a few words. Prince Philip, the heir to the throne, meets this charmless and unattractive girl as he goes for a walk. Ivona is awkward, apathetic, anaemic, shy, nervous and boring. From the start the prince cannot stand her, she irritates him too much; but at the same time he cannot bear to see himself obliged to hate the wretched Ivona. He suddenly rebels against those laws of nature which order young men only to love seductive girls. ‘I won’t stand for it, I’ll love her!’ He defies the laws of nature and gets engaged to Ivona.

Introduced to the court as the prince’s fiancée, Ivona becomes a decomposing agent. The mute, frightened presence of her innumerable deficiencies reveals to each courtier his own blemishes, his own vices, his own dirtiness... . In a short time the court turns into an incubator of monsters. And each monster, including the fiancé, longs to murder the unbearable Ivona. Finally, the court mobilizes its pomp, its superiority and its splendor and, with full grandeur, kills her.

That’s the story of Ivona. Is it so hard to understand?

As usual with Gombrowicz, it simultaneously is and isn’t easy to understand. On the page additional and contradictory meanings lurk just beneath the surface. I’ll add a few additional points on the story to flesh out the play. Prince Philip, tired of the frivolity and superficiality of the court, suffers from some sort of melancholy. He is unsure what he wants, and when he meets Ivona (with her insufferable aunts) he immediately sees her to be a “universal irritant.”

Ivona’s silence allows people to project their own behavior and feelings onto her. Philip sees Ivona by the light of his own turmoil, but his is a misery that he is rich and privileged enough to endure. The laws of nature Gombrowicz mentions in his summary are, of course, nothing of the sort but are social constructs, the sort Philip feels an urge to rebel against in order to prove his freedom. The court, in order to save face, calls the engagement an act of generosity. The lack of response from Ivona to questions and actions provokes everyone, who then blame her for her perceived provocations and slights.

The lack of response has other repercussions that can take several stages—in the case of Philip he initially believes her to be in love with him, causing him to feel a responsibility and tenderness for her. “She is the trap and I am captured. You love me, I must love you.” But then he sees himself as a laughingstock, interpreting every laugh and smile from members of the court as a barb aimed at him. Ivona signifies a mirror, always true in the reflection. People around her dismiss or rationalize the upsetting things they see, since she is, as the Prince puts it, “a living reproach.”

I’m interested to see how The Collected Works stages some of the ambiguous sections of the play, such as Ivona’s death. In that scene, the actors are saying one thing but their actions indicate something much more sinister. In addition, there will plenty of opportunities for slapstick and absurdity, with running gags showing up throughout the play. In other words, typical Gombrowicz, which is a good thing.

I’ll add a section with a few excerpts, and be sure to check out the links below for more examples as well as information on the play. All quotations are from the translation by Krystyna Griffith-Jones and Catherine Robins in Three Plays by Wiltold Gombrowicz (London: Marion Boyers Publishers Ltd., 1998). Ellipsis are in the original unless specified:

Prince Philip (responding to the charge that he frightened away some ladies of the court): I did not, their own secrets have driven them away. It appears that there is nothing more frightening. Famine and war are nothing compared to one little well hidden false tooth.


Prince Philip: Do you know the sudden transition from frivolity to seriousness. There is holiness to it. It’s a revelation.


King: I’ve just remembered something….
Chamlerlain: Remembered? What?
King: It’s a long time, I have forgotten all about it till now. I was only a prince and you were only an embryo of a chamberlain. That little one we…. You know…. I think on this sofa. I think she was a seamstress.
Chamberlain: The little seamstress. The sofa. Youth, oh blissful days of youth. [I'm skipping a brief interruption]
King: She died soon after that, I think…drowned herself.
Chamberlain: She did. I remember as if it were yesterday, she walked on to a bridge and then from the bridge…splash…oh, youth, youth. There is nothing equal to it.


Queen: I can’t go on like this. I must bring all my ugliness into the open before I am ready to go [kill Ivona]. Stop talking to yourself. Somebody will hear you. I can’t stop talking to myself. Do all murderers talk to themselves before the act?


For more on the play, including reviews of productions, see its page at Gombrowicz.net.
Thanks to Cynthia Haven for bringing the current production to my attention.
The Collected Works’ blog has some insight on their production.

As an aside, in Gombrowicz’s Diary there is a letter to the editor of a Polish journal that reports on the play Princess Ivona being panned by the critics upon its performance in Paris. Gombrowicz reports the summary of reviews that the troupe performing the play compiled, noting only four of thirty-nine reviews were unfavorable. The least favorable, of course, was the one reprinted in the journal. He may have had some thin skin, although his approach in the letter was more of trying to set the record straight. Finally getting performed in France and reviewed over 30 years after writing the play, Gombrowicz called his work “this Cinderella native literature,” a fitting description. (see pages 691-693 in the Yale University Press edition of Diary for the letter, translation by Lillian Vallee).

Update: see my post after attending it for more thoughts on the play and The Collected Works' wonderful performance. 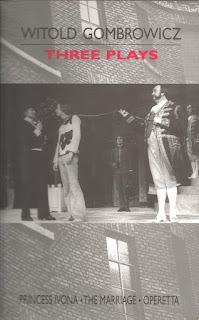