A Novel Without Lies by Anatoly Mariengof 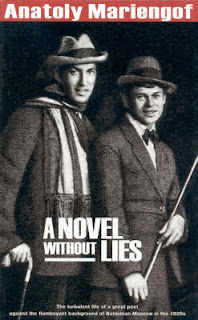 A Novel Without Lies by Anatoly Mariengof, translation by Jose Alaniz (Glas Volume 23: 2000)

The friendship between Anatoly Mariengof and poet Sergei Esenin started when they met during the summer of 1918 and lasted until Esenin’s suicide in 1925. These tumultuous times and their extraordinary events provide a backdrop for the “unvarnished portrait” Mariengof set out to paint of his friend in A Novel Without Lies.


Regarding the accuracy of his facts Mariengof wrote: ‘Whatever devilish memory one might possess one is unable to remember verbatim all the words and phrases said several decades ago. But the essence and meaning of the dialogues in my book are all true in spirit if not in wording. Such is human memory.’ First published in 1927, the book was soon banned as an insult to the ‘people’s poet.’ It was reprinted only in 1988.

(From the introduction, written by the book’s editors)

A Novel Without Lies contains sixty-eight vignettes that successfully provide the desired portrait of Esenin in addition to life in Russia during this period. It covers Mariengof’s and Esesnin’s writing life, attempts to get their works published, setting up a publishing house, cadging money and favors, and scratching out a life during a period of want. Mariengof doesn’t hide Esenin’s and his privileged position due to their celebrity and connections. Not that it was a life of ease and plenty—far from it. The advantages or benefits they received were erratic at best, and their notoriety carried a high profile risk with the changing whims of the state. The abundant sidenotes provide information on the many authors and public figures Mariengof mentions. The end of the writers' notes becomes predictable—those not emigrating from Russia are either murdered for being an “enemy of the people" or exiled.

The focus of the novel lies in Mariengof’s descriptions of and insights into Esenin, a complex subject. His scornful treatment of family and friends show an ugly tendency to discard people once they became a perceived burden. Then there is the boyish charm, not an act but a vitality and verve for life and writing. That vigor makes his mental and physical disintegration painful to watch. The lifestyle and travel outside of Russia after his marriage to Isadora Duncan was the beginning of this deterioration. Divorcing her and returning to Moscow did not halt the slide—failing to succeed in the West and his disillusionment with the path of Soviet Russia increased his instability and alcoholism, bringing out his worst traits. He broke with Mariengof and the Imagists, hanging himself after writing a poem in his own blood.

Mariengof little quips about his friend provide a profile that his stories complete:

The there is Esenin himself, revealing his grief about the fate of Russia in a letter to a girlfriend:


“I feel very sad at the moment that history is undergoing a difficult epoch, in which the individual as a living organism is targeted for destruction. Indeed, what’s going on is not the socialism I had envisaged at all, but a definite and deliberate one, like some island of St. Helena, stripped of glory, drained of dreams. You feel cooped up if you’re truly alive, if you build bridges to the invisible world, for they sever and detonate these bridges from under the feet of future generations. Of course, he for whom this invisible world unfolds, he will see these bridges, moldy by then, but after all it’s always sad to build a house that no one will live in, to hollow out a boat no one will sail in.”

Mariengof has an eye for the perfect detail to summarize and convey a wealth of information, both about his friend and their time. Chapter 15, which can be found here, is one of those moments where both are captured brilliantly. There’s another touching vignette about a girl witnessing a set-up of Esenin and Mariengof by students—the poets were asked to read at a student hall but were laughed off the stage. She follows them after the performance, crying over their embarrassing situation. Mariengof recounts how he saw her at Esenin’s funeral, recounting his friend’s affection for the girl and the regard they both had for her “splendiferous act.”

It’s my understanding that Glas will publish an ebook later this year combining Cynics and A Novel Without Lies, a great idea since the two books complement each other so well. Mariengof's style can capture the essence of what was going wrong in just a few lines:

A plumber lived in our courtyard. His wife had died of typhus. He was left with a hapless little boy of five, practically an idiot. The plumber kept going round to various agencies and orphanages, hoping to place the boy. Each time I ran into him, I’d ask: ‘Well, so how goes it—did you manage to place Volodya?’

The next week he reported: ‘They asked me to come back in a week.’

Or: ‘They said I oughta wait a little.’

And so on and so forth. At last I heard a different answer from the plumber: ‘I place him, Anatoly, I placed my Volodya.’

And with the very same gentle smile—so familiar to me—he told me how he’d ‘placed’ him. He’d bought a ticket at Yaroslavsky railway station, boarded the train with Volodya, and at Sergiev Posad, when the child had dozed off, he slipped out of the carriage and took the return train to Moscow.

Excellent post. That final episode you describe is so moving. I remembered Isadora Duncan from somewhere in a John Cowper Powys book.

I want to make clear that Mariengof doesn't blame Duncan for Esenin's problems. The situation Esenin got into with her was the contributing factor. He clearly wasn't able to handle the trip to the West.

That caveat provided, though...her lifestyle, surrounded by lots of alcohol, didn't help. And it didn't help that her personality, at least when with him (or at least as Mariengof describes it) seemed to bring out the worst sides of Esenin, too. When loaded, whether with money or booze (or both), he was a different character.