Well, despite the press release over two months ago this was news to me:

Three of Shakespeare’s great dramas about the burdens, madness and romance of ruling, all performed by one of the world’s premier repertory theater companies – The Stratford Festival in Ontario Canada – come to select U.S. cinemas courtesy of Fathom Events and By Experience. Presented under the banner of Stratford Festival HD, the series begins with the tragic tale of King Lear on Wednesday, Feb. 25, continues with King John on Thursday, April 8 and finishes with Antony and Cleopatra on Thursday, May 21. Each production features top-notch casts that breathe fresh life into these timeless dramas.

I see that these were three of last year's performances at The Stratford Festival filmed in high definition. Colm Feore will be in the title role of King Lear. There are approximately 320 U.S. theaters currently listed on the location finder. More information for non-U.S. locations can be found here.

Here's the detail page on Wednesday's one-night event of King Lear. I'm planning on going (wishing I had more information on it and that I had found out about it before today). 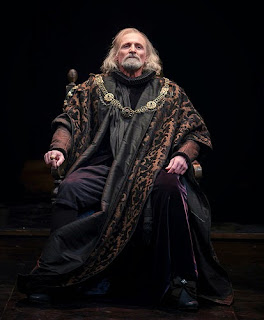 I would be especially excited to see "King John" because it is so rarely performed. I don't have access to this in Mexico, though. Maybe they'll put out disks eventually.

I would love to see "King John" as well, although I'm a little concerned they went more than a little over the top on the "neurotic narcissist" angle. But we'll see. I'm hoping these come out on disc or somewhere streaming after the theater release dates.

"Horrible Histories" is great. I use clips from it all the time when I teach World History.