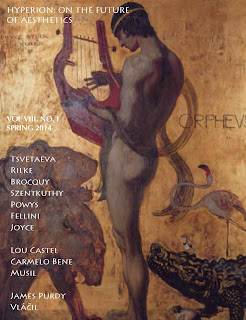 Cover of Hyperion Volume VIII, No. 1 (spring 2014)
Contra Mundum Press' online magazine, Hyperion, has a new issue available! I'll post on a few of the articles over the next week.

The first article I want to mention is three short pieces by Robert Musil, all translated by Genese Grill. The first piece is "The Inn on the Outskirts," which comes with the following footnote:

This story appears in Musil's Nachlass in a shorter altered version under the title "The Redeemer" (an early title for the novel; c. 1924-5) and prefaced with the subtitle "A Dreadful Chapter: The Dream" (translated by Burton Pike in the Nachlass section of The Man Without Qualities, (Knopf, 1995) 1703-1706. It is followed by the notation: "It is probably necessary to say that this is not a true experience but a dream, for no decent person would think such a thing in a waking state" (1706). There are traces in this "dream" of Musil's sex murderer, Moosbrugger, and of Bonadea, the married nymphomaniac. — Trans.

It is a troubling piece, taking place late at night at the mentioned inn where a couple (not married to each other) have checked in for a tryst. They waver back and forth between desire and regret. The woman feels that the man wants "to extinguish her with his words" in the beginning while a later "storm of great deed" may literally accomplish that.

The second story, "Small Trip Around the World," is a simple tale of two boys taking a joy ride with a pony and small wagon. Their jaunt and inevitable capture provides the narrator with a chance to provide morals as well as listing the conflicting possible messages the parents and juvenile welfare officers might provide. "They probably will just give the stupidest answer that one can give, they will smile benevolently and say: you did something stupid." Been there. Done that. On both sides.

The third story takes place on the German island of Sylt in 1923 when Musil vacationed there. The strong storm he describes, along with the resulting tidal surge, provides a sobering look at nature's forces.

These are very short pieces but they gave the reader an opportunity to enjoy Musil's finesse and reflections.