Hyperion Volume VIII, No. 1: an excerpt from Miklós Szentkuthy's Prae 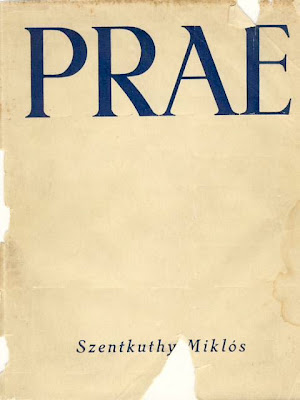 The cover of the first edition of Prae (1934)
Picture source

Continuing on with articles from the current Hyperion issue (mentioned here, there is a lengthy excerpt of the third chapter of Contra Mundum Press' upcoming release of Miklós Szentkuthy's Prae, translated by Tim Willkinson. In a post last fall I highlighted another Hyperion article by Filip Sikorski titled “Introductory Remarks on Miklós Szentkuthy’s Prae”. Sikorski provides a synopsis of the novel, looks at its main themes, investigates how it can be read non-linearly, and explores Szentkuthy’s narrative technique. Here is Sikorski's summary of Volume 1's third chapter:

In chapter 3, Touqué continues the monologue but abandons the analysis of desire and looks back into his childhood. In a series of flashbacks, he reminisces about his parents, his mother’s boutique in Cannes, his mental illness and a stay in a clinic, a morning in Cannes when he was sent to fetch a dress from the boutique to the seamstress, and another morning when he observed the Riviera landscape from the window of his bathroom. Touqué’s memories are interrupted by one more italicized passage, the Third Non-Prae-diagonal, in which a woman named Yvonne calls her lover to cancel their rendezvous because she is going to confession.

Leville-Touqué is "a French philosopher, writer, and editor-in-chief of a periodical called Antipsyché." Not all of the summary makes it into the excerpt but most does and it provides fun, challenging reading. The Non-Prae-diagonals mentioned are italicized passages expressing inner experiences. Even though this is the third chapter, Sikorski argues "that the novel is composed out of loosely connected segments and therefore it can be read in a non-linear way." WIth the little bit of introduction in this post the reader should be able to follow along through most of the excerpt.

Additional reading of Sikorski's summary of the novel will help fill in a few gaps but I don't believe it's necessary for the full enjoyment of Szentkuthy's style, his inventive comparisons, and his encyclopedic references. If you have never read anything by Szentkuthy this would be a good introduction. Here's just one sentence, an aside, in case you need prodding to read it (or proof that you don't want to touch his work):

(Because clumsiness is just as important a factor as the Protean bogeyman of instinct or the contrary extreme of stylization: that ought to insert between a Parca-visaged automatism of sincerity and a goddess grown into a permanent mask a bit of ersatz mythology from the Guardian Spirit of Stupidity, who plays a role as a positive inspirer and stylistic creator in life, reaching such concrete boundaries that it is all but impossible to treat it merely as an internal mental property.)

If you are interested in Prae, be sure to read an excerpt from the 1983 interview Szentkuthy gave to literary historian Lóránt Kabdebó at Hungarian Literature Online. (These series of interviews were later published in book form.) The excerpt from the interview addresses some of Szentkuthy's sources and inspirations for the novel. Several snippets I wanted to share: 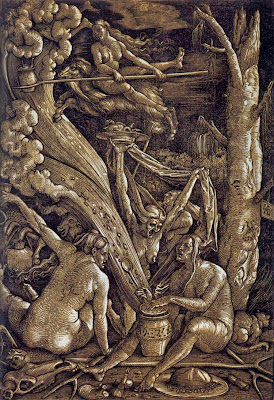 "Witches Sabbath" (1510) by Hans Baldung Grien
Woodcut with tone block
Picture source at Web Gallery of Art
Used on the back cover of the second addition of Arc és álarc (Face and Mask), 1982
Posted by Dwight at 3:40 PM