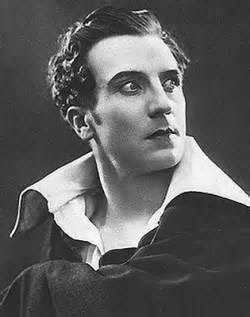 I thought I was through with my Kean project, but Sunday evening I checked to see what was on TCM and the onscreen guide promised Kean with Anthony Hopkins, the version I had blegged about a while back! Knowing this slot was usually reserved for silent movies I had my doubts, though, so I checked out TCMs page on Kean and it promised the 1924 film version, which is what was shown:

Dashing Russian actor Ivan Mosjoukine stars in the 1924 silent production of Kean, an engrossing dramatization of the life of British stage actor Edmund Kean, widely considered to be one of the greatest actors of the 19th century. Based on an 1836 play by Alexandre Dumas, this seldom screened gem covers Kean's celebrated career along with his freewheeling lifestyle as a libertine and eventual decline fueled by heartbreak and alcohol.

Kean, directed by Alexandre Volkoff, was a major production from Albatros, the famed company formed near Paris by a group of Russian migrs who made several notable contributions to early French silent film. Russia's answer to Rudolph Valentino, Ivan Mosjoukine shines in his nuanced performance in the title role.

I believe they meant Russian émigrés. See this article for information on the production company and some of their films available for sale (I have no connection to the site). Here’s what they have to say about the film:

This movie is basically a showcase for Ivan Mosjoukine who plays the title role. The movie begins with a 20-minute sequence from Romeo and Juliet, and there are extended scenes of Kean playing other roles from Shakespeare. It a great vehicle for Mosjoukine to declare that he's a serious and talented actor, which he undoubtedly is, but it doesn't work as well as it should. When Kean is on stage, Mosjoukine seems to be in 'acting' mode, using exaggerated gestures and deliberate, thought-out motions. This makes the "performances" seem more wooden than the rest of the film where he has a more natural style. The fact that we can't hear Kean speaking and have to read title cards instead also subtracts from the performance. Still, it is a good film, even if you didn't know anything about Kean aside from that one famous quote [Kean supposedly said “Dying is easy, comedy is hard,” although there isn’t much evidence for the attribution]. There are some very good scenes, like when Kean gets drunk in the pub, and double exposures were used in a very effective manner.

I’ll address some of these issues in this post, but I’ll agree there are some very good scenes and I thoroughly enjoyed the overall film. Previous posts related to the actor and the play can be found at these links:


The introduction said the movie was adapted from Dumas’ play and historical documents, although both claims are a little misleading. The first half of the movie is fairly faithful to the spirit of Dumas’ play, showing some of the backstory and other scenes referred to in the play, but begins to diverge as secondary plots are omitted and a painfully long death scene ends the movie. The original title of the film was Kean but has alternately been titled Edmund Kean: Prince Among Lovers or Kean: Or Wildness and Genius. The restored print TCM aired used the latter and that really is the focus of the movie—his talent and his disordered life.

The best part of the movie for me was the interaction between Kean and his servant Solomon (I’m going to retain the spelling used in the Sartre post even though there is some variation in the Dumas play and the movie). In his version of the play, Jean-Paul Sartre emphasizes this more than Dumas does and I think it works extremely well. In the movie it’s clear they both love each other, Solomon declaring that he is Kean’s only friend in the world. The servant obviously cares for Kean, helping him out of scrapes while facilitating getting into others. In this version, Solomon is also Kean’s on-stage prompter. The funniest scenes of the movie involve these two interacting, whether it’s Solomon practicing fencing with Kean, Solomon dressing up in a tiger rug to scare off creditors, or Solomon in drag to avoid the creditors as they leave the house. Kean can be a little rough with Solomon at times (bordering on abusive) but it’s clear he values his friendship. Solomon attempts to make things better for Kean, providing advice even though the actor ignores it most of the time.

There is much more of an emphasis on Kean’s dissolute life, emphasizing the “wildness” part of the subtitle. Dissipation in this case equals dancing, drinking, more dancing, and a lot more drinking. One bar scene does a good job in piecing these actions together to make Kean appear manic, dancing and drinking the night away with sailors. Occasionally excuses are given for his behavior, especially the class differences and how actors are treated, but I think the movie intends to show that this is a major part of Kean. In other words, it is a part of his very being, as is his brilliance in acting.

Kean's acting on stage, as noted in of the review above, looks exaggerated and deliberate, wooden instead of natural. I find some humor in the fact that the movie (1924) is almost exactly as far removed from the play (1836) as the movie is from today. This style of acting is what silent movies did—the exaggeration is only slightly toned down when Kean isn’t on stage, but there is that added level when he performs and the audience loves it. I found that the exaggeration on stage helped drive home the point that the public loved Kean “the actor” and not Kean “the man.” Sartre’s play emphasized this distinction more than Dumas did, and I think the movie is doing the same thing. When Kean “the man” steps forward from behind his character during his last performance (when he insults the Prince of Wales), the crowd turns on him, booing and throwing food at him. They have no desire to see him, they want to see him perform. The real man is despised and derided—even the livery men at the Danish embassy mock him (via Solomon). There is an additional scene where Kean reads to his actor friends and his delivery and motions are much more normal, highlighting the artificiality of the stage. He notes before his charity performance that he works in a “Damned profession. Where we are masters neither of our joys nor our pains. Always a mask, never a face.” Sartre highlights this difference more, but it’s in Dumas’ play and the movie notes it as well.

A large part of Anna Danby’s escape from her fiancé Lord Neville is not included in this movie version, with no negative impact. Anna was a weak character in Dumas’ play so her cut scenes are fine with me (Sartre makes her a much stronger character). The confrontation between Kean and Lord Neville in the bar, though, is very important to the play and the movie suffers from its exclusion. The worst addition to the movie, by far, is the death scene. As noted in the IMDb.com link, this is supposedly the longest death scene on film. The only other film that had me muttering “Die, already” was to Debra Winger in “Terms of Endearment.” This scene was around 17 minutes and outside the tender moments with Solomon and Elena it is way too long. To demonstrate his love of Shakespeare Kean asks Solomon to read from his plays for him, but Kean ends up quoting several death scenes. I guess the storm breaking at his death and blowing out the candle, emphasizing earlier lines about Kean being England’s sun or light, was OK but by that time I just didn’t care. The closing of the movie, with a curtain being pulled on the scene as if it were on a stage, was a nice touch.

Even with that complaint it’s a decent adaptation and the first 90 minutes has some great moments. Robert Israel adds the new score for the film. Definitely recommended if you happen to stumble across it.

A few additional links on this film:

The flyer for a viewing of it at the Edison Theater at the Niles Essanay Silent Film Museum in Fremont, California. If you find yourself in the area, I strongly recommend a stop in at the museum.

Another review of the recently released French Masterworks – Russian Emigrés in Paris: 1923-28 set. 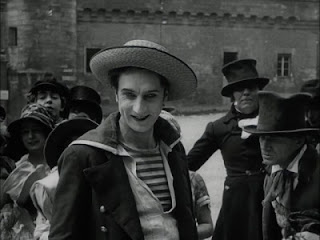 Ivan Mosjoukine as Edmund Kean
(and possibly what Cap'n Geech & The Shrimp Shack Shooters would have looked like if they used the Who instead of The Wonders)
Posted by Dwight at 3:58 PM