Edmund Kean: fact, myth, and everywhere in between 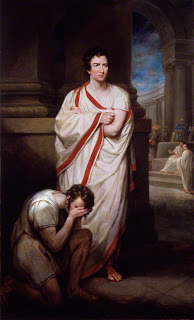 Edmund Kean (1787 – 1833), an English actor noted for his leading roles in Shakespeare, was as famous for his personal life as for his professional one. His messy divorce, many affairs, adultery trial, and riotous excesses were fodder for gossip. His stage performances alternated between laughable and brilliant—in his last performance (Othello) he received an ovation while he was suffering what he thought were his death throes. Six weeks later he died. His was a life of celebrity that other notables found memorable, good or bad. About the actor Samuel Taylor Coleridge said, "Seeing him act was like reading Shakespeare by flashes of lightning." Harry Houdini collected Kean memorabilia.

Jeffrey Kahan in The Cult of Kean (Ashgate Publishing Co., 2006) traces the celebrity of the actor, looking at the cultivated image Kean tried to project, and sometimes live up to. Kahn also looks at the various hagiographic treatments his biographers published, adding to the actor's reputation. Three years after Kean’s death, Alexandre Dumas wrote the play Edmund Kean, Or, the Life of an Actor at the behest of the actor Frédérick Lemaître. In an ironic case of symmetry, after the French actor Pierre Brasseur played Lemaître in the film Les Enfants du Paradis he asked Jean-Paul Sartre to write a play based on Dumas’ work so he might play Kean. Sartre was intrigued by Kean, seeing him as an archetypical existential man, alienated from himself and everyone around him: “He [Kean] was the Myth of the Actor incarnate. The actor who never ceases acting; he lives out his life itself, is no longer able to recognize himself, no longer knows who he is. And finally is no one.” (140)

Sartre based his portrayal of Kean not on the actor himself but on Frédérick Lemaître, who is said to have “become” Kean on the stage and in his personal life. The legacy of Kean continued with a musical comedy, Kean by George Forrest and Robert Wright, playing on Broadway in 1961. It was based on Sartre’s play which was based on Dumas’ play, emblematic of the way in which the legend-building Kean’s life comes to us. Kean, as a character, has become as famous as his performances during his life, on and off the stage. His death scene as played by Ivan Mosjoukine in 1924’s film Kean (renamed Edmund Kean, Prince Among Lovers) is larger than life, setting a record for the longest death portrayed in cinema—ranging between 16 and 20 minutes depending on the speed of the projector. Note in the review they even take pains to point out that the portrayal is “more like the popular idea of the famous actor” instead of an accurate depiction.

Brian Moyes has a great post on Kean leasing a Scottish house on the Isle of Bute. Check out the pictures of the busts adorning the gate: Edmund Kean, William Shakespeare, Philip Massinger, and David Garrick. As Brian notes, “Obviously modesty wasn’t one of Kean’s traits.”

Update (19 Jun 2013): Edmund Kean at Richmond, a page providing detail on Kean's life in the Richmond Upon Thames borough of London. There's a link for further reading on the topic, too. 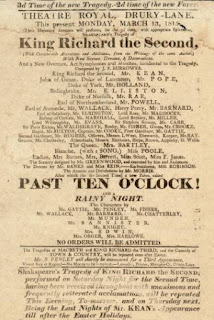