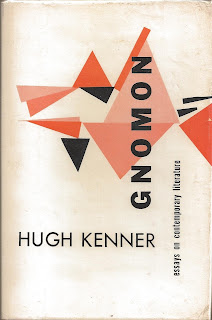 Thanks to Anthony @timesflow for tweeting about the planned reissue by Dalkey Archive of Gnomon: Essays on Contemporary Literature by Hugh Kenner. Unfortunately it's not scheduled to be released until next summer, but it's a chance to set aside some money for wonderful essays written in the 1950s about 20th century literature.

From the bookflap of my copy:

The function of criticism, Mr. Kenner says in his provocative preface to Gnomon, is to elucidate. These essays on twentieth century literature clarify, without tedious infighting, both specific works like Williams' Paterson and Pound's Rock Drill Cantos, and the whole achievement of writers like Yeats and Ford. Never soggy, fussy, or commonplace, the essays proceed by quotation and sharp, exact statement; Mr. Kenner succeeds in realizing his subjects as wholes while discussing them in terms of producible fact. The result is to induce not vague appreciation but a renewed and exact understanding of the salient literary developments of our century.

The epigraph quotes from Chapter 85 of Pound's Rock Drill Cantos must be part of his view of the critic: "...study with the mind of a grandson / and watch the time like a hawk." The essay on Ford Madox Ford's Parade's End, released as a tetralogy in 1950, alone is worth the price of admission. The breadth and depth of the essays are astounding while providing joy in their reading. From the looks of the Dalkey Archive info, the number of pages is the same so all original essays should be included. Very highly recommended.


Side-side-sidenote: my copy came from the library of J. S. Lewis. While the initials could be for hundreds if not thousands of people, I've wondered if it is the father of the author Jon Samuel Lewis.

I remember an excellent essay on Yeats. Thank you for the heads up.

Thanks for the information. I've read several works by Kenner and always enjoyed his perspective.

Sorry it's so far in advance, but just trying to get the word out on some great essays!

I tend to love these kinds of essays. It is fantastic that this will be rereleased.

I enjoy these types of essays as well, and Kenner's writing and knowledge make them even more enjoyable.

Gnomon is one of my favourite words.