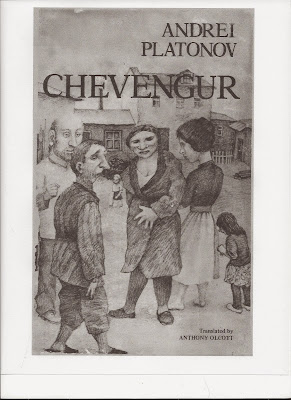 
Posts on the novel:

Update: a large pdf file of the novel (the Olcott translation) is available here.

A quick overview of the novel: the orphan Sasha Dvanov joins the Red Army during the Russian civil war. After the war Sasha is asked to look for spontaneous outbreaks of socialism in the countryside and report on his findings. He meets and befriends the revolutionary Kopenkin, a Don Quixote-like figure with the dead Rosa Luxemburg as his Dolcinea and the horse Proletarian Strength for his Rocinante (although, to be fair, PS is an extremely able horse…one of the few survivors to the end of the novel). Their journeys in the countryside take them from situations ranging from silly to ludicrous, and much in between. While taking a break in his home village Sasha hears about the town of Chevengur where communism has reportedly arrived. Sasha writes to Kopenkin, requesting him to investigate the situation and promising to follow as soon as he can. Kopenkin finds a parody of a utopia in Chevengur, no one there certain as to what communism means beyond their naïve faith in slogans they have heard. They believe communism will be something tangible, a force that will allow the sun to provide for everyone without their having to do any work. After slaughtering the bourgeois and semi-bourgeois, the remaining villagers send a delegate to find more proletariats and “miscellaneous” (societal cast-offs) to share their utopia. A funny thing happens –the Chevegurians begin to develop a communal spirit and desire to help each other. After a government official reports on what he finds in Chevengur, soldiers appear and wipe out most of the town.

A major theme in the novel focuses on the conflict between communist ideology and a utopian society, with other factors thrown in such as bureaucracy and human nature, which aren’t tied to any ideology. In the above posts I’ve highlighted some of the sub-themes and motifs in the novel, such as the importance of water, the feeling that the promise of the revolution is fading, although they didn’t receive the emphasis I was hoping to give them. Water turns out to be a constant in the novel, although not always what you would expect from the hydrologist Platonov—water is constantly associated with death in the novel or, at best an absence of life (and ideology). It even invades Sasha’s dreams, providing a link to his dead father.

First and foremost, though, Chevengur is a study of what happened during the Russian Revolution. Platonov shows a rhythm of life and nature throughout the novel, starting with descriptions in the opening passages. While drought and famine were part of the normal cycle, under Soviet policies they occurred more often and lasted longer. For many of the characters there is a feeling that the revolution has not lived up to its promise or that something had sullied the revolution. In Chevengur the question arises whether or not the utopia promised is possible. Literally following the ideology didn’t achieve it, while cutting “short the length of history” leaves mounds of murdered people in its wake. Just as the communal feelings of a utopia begin in the town of Chevengur the people behind the ideology wipe it out. The utopia wasn’t guaranteed to succeed anyway since human nature had plans to highjack the village for its own profit. Simon, the bureaucrat, recognizes “socialism had been replaced with bureaucracy,” dooming the utopian village.

I wanted to include an excerpt that provided a representative insight into the novel as well as being indicative of Platonov’s style. The following paragraphs focus on the revolution and different meanings ascribed to it as well as many themes and images that run throughout the book. People in the quote are Sasha Dvanov, his father (the “fisherman Dvanov”), and Chepurny (the president of Chevengur’s Revolutionary Committee):


The revolution was passing like the day. Shooting died slowly in the steppes, the districts, and the whole Russian hinterlands, while the roads used by the army, horses, and entire infantry of Russian Bolsheviks gradually grew over with grass. The expanses of plains and fields lay in emptiness and silence, exhaling vapors like new-mown hay, while the late sun toiled alone in the slumbering heights above Chevengur. Now no one appeared in the steppe on a war horse, for some were killed, their corpses not found and their names forgotten, while others had demobilized their horses and were leading the poor of their home villages forward, not into the steppes, but into a better future. And if someone did appear out in the steppe, no one took a second look at him, since it would have to be a safe and peaceful man who was riding past on the business of his own concerns.

When he and Gopner arrived in Chevengur, Dvanov noticed that nature lacked its former alarm, while the villages along the road were filled with danger and poverty. The revolution had passed these places by, freeing the fields for peaceful despond, while it went off Lord knows where, as though it had hidden in the inner darkness of man, exhausted by the paths it had traversed. It was as though it was evening in the world, and Dvanov sensed that evening was gathering within him as well, a time of maturity, a time of happiness or regret. It was in precisely this sort of sundown of life that Dvanov’s father had hidden permanently in the depths of Lake Mutevo, wishing before his time to see the future morning. Now another evening was beginning. Perhaps that day whose morning the fisherman Dvanov had wished to see was already passed, his son once again suffering evening. Alexander Dvanov did not love himself too deeply to achieve communism for his own personal life, but he went forward with everyone else because everyone was going and it was frightening to remain behind alone. He wanted to be with people because he had no father or family of his own. On the other hand, communism tormented Chepurny the was the secret of life after death had tormented Dvanov’s father. Chepurny could not bear the mystery of time, so he cut short the length of history by the rapid construction of communism in Chevengur, just as the fisherman Dvanov could not bear his own life and so had transformed it into death, in order to experience the beauty of the world. However, Dvanov loved his father not because of his curiosity and he liked Chepurny not because of his passion for immediate communism. In and of himself his father had been vital to Dvanov as the first friend he was ever to lose, while Chepurny was essential as a homeless comrade whom no one would clasp to themselves if there were communism. Dvanov loved Kopenkin, Chepurny, and many others because all of them, just as his father, would perish of impatience with life while he would stay alone among strangers. (258-9)

I love the contrast between Sasha and Cherpurny, how communism soothed one and tormented the other. Linking Chepurny’s torment with Sasha’s father highlights the fluid and natural transformations in life, including revolution. It also highlights how people become a part of you, reflected again in this excerpt from near the end of the book. Sasha has returned to Lake Mutevo, where his father drowned himself:


He sought that same road along which once his father had passed in his curiosity about death, though Dvanov walked it in a feeling of shame at living in the face of that weak, forgotten body whose remains suffered in the grave because Dvanov remained ever and the same, bearing the same warming traces of his father’s existence in a still undestroyed form. (332)