Chevengur by Andrei Platonov: they existed as slaves to the reservoirs 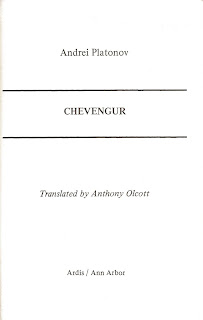 I plan on several posts as I read through Platonov’s Chevengur, focusing on what strikes me as I go. The English translation is out of print but can be obtained from other libraries through interlibrary loans--please do so! Don’t expect any unifying theme in or between my posts—the headcold I have seems to be blocking coherent thoughts (more than usual), so I apologize in advance for the rambling…

The opening has several layers of meaning, many of which are revealed the further as you go in the novel. Here are two sections from the opening pages:

There are fringes of decay around old provincial towns. People come here to live straight out of nature. One such man appeared, his piercing face exhausted to the point of melancholy.

Every fifth year half the village used to leave for the mines and the cities and the other half went into the forest, because of crop failures. It had been known for ages that even in dry years grass, vegetables, and grain ripened well in the forest clearings, and half of the village that stayed threw themselves on these clearings to save their greens from being snatched away by floods of greedy wanderers. This time, though, the drought repeated itself in the second year too. The village locked its huts and went out on the highroad in two detachments, one to beg its way to Kiev, the other to Lugansk to work. Some few villagers returned to the forest and the overgrown gulches and went wild, eating raw grass, clay, and bark. Virtually all who left were adults; the children had either died off on their own accord earlier or had run away to become beggars. Mothers who were nursing gradually tormented their infants to death by not allowing them to nurse their fill. (3-4)

We start with men leaving nature, gathering for civilization. The harsh cycles of nature, though, drive people from the decayed fringes back to nature or to a more urban (allegedly more organized) setting. In this case, the extended drought takes place just before World War I and turns out to be a foretaste of what will happen with the World War, the civil war, and the programs to follow. Water turns out to be an important element in Chevengur—Platonov trained as an electronic technician but later specialized as a hydrologist, focusing on land reclamation and watershed control.

The man mentioned in the first sentences of the text is Zakhar Pavlovich, a mechanic interested in understanding things. Zakhar isn’t the brainiest of men but he tends to come to his understandings “using just the heat of his own impressionable feelings.” (34) Zakhar’s importance, though, turns out to be our introduction to Alexander (Sasha) Dvanova. Chevengur is many things, one of which includes the coming-of-age story of Sasha. In my post on links to Platonov and Chevengur I include the essay "Platonov’s Chevengur: the Ambivalent Space" by Natalia Poltavtseva. If you read only one link from that post I recommend her essay. She covers the importance and symbolism of Sasha’s three fathers (even if I disagree some on the particulars). Her comment “In terms of mythological interpretation, all of them represent different stages of man’s attempts to overcome the chaos of the world, the powerful and sluggish force of attraction to first matter” beautifully captures the importance of the three men. Sasha’s father, a fisherman, was insatiably curious about death while at the same time didn’t believe in it. His preoccupation, denying the power and course of nature, leads to his drowning in Lake Mutevo. Sasha goes to live with Prokhor Abramovich Dvanov, who tries to overcome nature through propagation. His wife gives birth to eighteen children (I believe) before Sasha is chased away from the house by the eldest son, who sees Sasha as a rival to his birthright. Zakhar becomes the third father figure for Sasha. Zakhar doesn’t necessarily try to “conquer nature by means of technology and culture”; instead, he attempt to understand technology (though his impressions) by looking at their essence. He tires of this life and rejects technology:

The warm fog of love for machines in which Zakhar Pavlovich had lived so peacefully and hopefully was now blown away by a clean wind, and before Zakhar Pavlovich opened the defenseless, solitary life of the people who live naked, with no self-deceiving faith in the aid of machines. (35)

Zakhar’s underlying philosophy, during and after his interest in technology, resides in people living harmoniously. He may not have been the brightest peasant but his statements apply to questions raised in pre- and post-revolutionary Russia. In reply to Sasha’s question how things ought to be, Zakhar replies

“Just different, somehow. If they had sent me to the Germans just as soon as the quarrel got started, I’d have come to an agreement with them straight off, and the war would have come out a lot cheaper. But instead they send the brainiest ones!” Zakhar Pavlovich could not imagine a man with whom he would not be able to sit and chat in a neighborly way. Yet it could hardly be that up there on top the Tsar and all his servants were all fools. Which meant that war is not a serious affair, but a deliberate one. And here Zakhar Pavlovich reached a blind alley, wondering whether it is possible to chat in a neighborly way with someone who deliberately kills people, or must one first take away his dangerous weapons, wealth, and worth. (39)

Sasha joins the Red side of the civil war, fighting Cossacks. The president of the provincial executive committee, Shumilin, has the idea that Socialist elements were developing an “emerging spontaneous generation of socialism among the masses” (62) so he sends Sasha to study and report about what was happening in the countryside. One of the first things Sasha notes is that people live near “tracks of water. They existed as slaves to the reservoirs.” (64) Sasha looks at the upper steppes and see potential flourishing there…all it lacks is water. He dreams of water glistening “in the dry uplands. That would be socialism.” (65) It’s a leap of faith, but no sillier than any other reasoning in the novel to bring about socialism. Not to mention it involves a lot of symbolism, such as nomads vs. development and plenty vs. scarcity.

It’s at this point that Sasha stops and provides his only written report to Shumilin, articulating his belief on the key to developing socialism, something that wouldn’t spontaneously occur but would take plenty of work and patience.

Soon the narrow valley of some ancient, long ago dried up river opened before him. The valley was occupied by the post town of Petrpavloka, an enormous herd of greedy houses bunched up around a tiny watering hole.

Dvanov saw boulders on the streets of Petropavlovka which had once been brought there by glaciers. Now the glacial boulders lay by the huts and served as seats for old men.

Dvanov later remembered these stones when he was sitting in the Petropavlovka village soviet. He had dropped in there so that they would give him lodgings for the approaching night and so he could write Shumilin a letter. Dvanov did not know how letters begin, and informed Shumilin that nature had no particular gifts for creations, that it succeeds through patience. Boulders had crawled from Finland across the plains and the sorrowful expanse of time into Petropavlovka on the tongue of a glacier. Water had to be brought from the rare steppe washes and the deeper layers out onto the high steppe, so as to establish socialism in the steppe. That’s nearer than dragging boulders from Finland.

Yep, that’s exactly the report I would want if I were waiting for information on outbreaks of socialism in the countryside. Except…this is probably the best you are going to get. In this situation everyone speaks in metaphors or non-sequiturs since what they feel can’t be expressed in their thoughts or feelings. While partially a barb at education under the tsarist system it's also a reflection on the difficulty of organizing society in a peaceful manner. Or, to steal again from Natalia Poltavtseva's essay,

What happens when Platonov’s characters — whom he endues with murky consciousness and lack of feeling — are forced to face the enormous problem of the consequences and meaning of the Russian Revolution, the predominant theme of his creative work, and the problem considered first and foremost by Platonov himself, and all those who study him? It is that same anthropological quality that enables man to look for the necessary harmony and balance between fiction and what we would conditionally call reality, and what Frank Ankersmit called the “correlation between historical experience and memory”.

Things get even more interesting as Sasha continues on his mission and he becomes determined to help socialism along instead of just reporting on it. Without realizing it, Sasha enters the world of Gogol’s Dead Souls. I should add he does so much to the reader’s enjoyment.