The Shadow by Benito Pérez Galdós 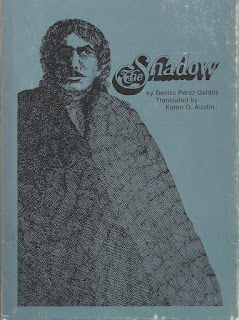 The Shadow (La sombra) was written by Galdós in 1866 or 1867 but wasn’t published until 1870 in serial form. It was his first novel and, although I think it stands reasonably well on its own, it suffers in comparison to his later works. Even so there are some nice touches, especially his use of alternating narration providing much of the tension and ambiguity (already!) in this work. Then there’s the quirkiness of the story, including touches of romance and gothic horror, all while making a social statement. But I get ahead of myself.

One should begin at the beginning, that is, by telling the reader just who this don Anselmo is; by telling him of his life, his habits, by speaking of his character and appearance, without omitting the fact that everyone who knew him considered him to be stark raving mad. This opinion was general, unanimous, deeply rooted, and the frequent flashes of genius of that incomparable man, his moments of good sense and eloquence, the affable courtesy with which he lent himself to the telling of the most curious events of life, making discreet use in his narrations of his prodigious imagination, were insufficient to belie it. They said that he did idiotic things, that his life was a series of innumerable follies, and that he became engrossed in strange and incomprehensible pursuits not undertaken by anyone else, in sum, that he was a strange fellow who had never been known to do anything right, the way the rest of us normally do things.

The unnamed narrator of the opening paragraph introduces Anselmo (referred to occasionally as the doctor)as people currently see him. The eccentricity of his dress, manners, and house are described in great detail. The narrator then meets with Anselmo over a couple of evenings and hears his story from years ago.

Anselmo marries a young woman, Elena, and his love for her causes his already unstable senses to feverishly work overtime. He imagines the figure of Paris, from a very sensual painting of Helen of Troy and Paris, disappears from the canvas. He also imagines hearing a male voice in Elena’s room and, upon his approach, what sounds like fleeing footsteps. In a rage, Anselmo breaks open the door to her room. He finds nothing and notices the window is closed and the interior door is locked. The fright to his wife, though, was very real. A second occurrence of hearing voices in his wife's room causes him to intrude again, but this time he thinks he sees a shadow escape though the window. Anselmo follows the shadow into the garden. Thinking he sees the figure hiding in the well he spends all evening filling it up with rocks. Anselmo feels tortured by betrayal, but a few days later in his bedroom the shadow takes corporeal form as Paris from the painting. They hold conversations that depress the doctor, driving him mad with the realization that he will never shake such a being, so he challenges Paris to a duel. Even though Anselmo’s shot would be deadly to a mortal, Paris lives. Anselmo has the being brought to his bedroom and they continue to hold conversations, heightening the husband’s shame at the loss of his honor.

Anselmo then reveals that his damaged honor may have a real basis—a young man, Alejandro, who lives for seducing women. While Elena’s family knows of Alejandro’s visits, they believe her part in the "affair" to be innocent. The gossip in town, though, tells a different story. Anselmo’s mental stability disintegrates and his treatment of Elena causes her health to deteriorate. Eventually she dies and Paris disappears, although the question of his reappearance in the painting is left unanswered.

The story, bizarre as it is, is enhanced by Galdós’ way of working the narration. As seen in the opening paragraph the unnamed narrator paints an unflattering picture of Anselmo, although the emphasis at this point is on what others say about him. The narrator gives a detailed description of Anselmo’s apartment, highlighting the peculiar nature of its contents. Once the narrator begins to recount his recent conversations with the doctor in that apartment, his certainty of Anselmo’s lunacy is confirmed in his asides and comments. As Anselmo continues the story he begins to control the commentary. With less asides and contradictory statements from the narrator, Anselmo’s narration becomes more believable. The duel and the talks with Paris seem more creditable as the reader sees the impact they had on the doctor.

A funny thing happens when Anselmo reveals the existence of Alejandro—the narrator puts the pieces together in a plausible fashion and believes more of the doctor’s tale. Anselmo, on the other hand, raises doubts and reasons that events couldn’t have taken place as he relates them, noting his unstable mental state several times. The narrator, on the other hand, interprets events as they could have happened and provides a link to reality:

”Well, if I’m to speak frankly, my friend Don Anselmo,” I said, “that adventure, far from becoming clearer as the end approaches, is becoming more complicated and darker. At the beginning, when the figure of Paris appeared to you in your room, the case could be considered a creation of your imagination, a mental aberration. Although rare, there are cases in which a sick imagination produces those phenomena that have no external reality, but exist only within the individual who produces them. The figure that disappeared from the canvas, the voice you thought you heard in Elena’s room, the shadow you saw hiding in the wall, all that can be explained by an obsession that, though rare, is not impossible. But afterwards it turns out that there is a real being, one Alejandro, a person visible to everyone and who frequents your house; a person exactly like the intrusive shadow and who seems determined to upset marital peace, not by any fantastic means, but by real ones, as can be deduced by your dialogue with your mother-in-law and your friend. What do we agree on? What relationship is there between Paris and Alejandro? By a coincidence I do not think accidental, these are the two names of Helen’s ravisher in the heroic fable.”

The narrator’s increasing certainty becomes as doubtful to the reader as Anselmo’s earlier fantastic tale, in no small part due to the increasing reliance on Anselmo’s stories. It doesn't help that Anselmo increases uncertainty on what really happened by doubting his own story. The reader will also note that the narrator experiences effects mimicking those described by Anselmo, undermining the fantastic nature the narrator ascribes to them. For example, one of the narrator’s visits to Anselmo’s study/laboratory causes a terror when it seems weird objects come to life, something similar to the living shadows the doctor experienced.

At the end of the tale the narrator chides Anselmo for not telling the story in a logical manner. Anselmo agrees, explaining the reason for his method in telling his story personifying his (perceived) loss of honor:

”Exactly,” replied the doctor; “except that I, to give my adventure more truth, I recount it as it happened to me, which is to say, backwards. A complete disorganization took place in my head; and so, when the first of my hallucinations occurred, I didn’t remember the background of that painful mental illness.”

So storytelling can be manipulated in order to give a story more truth? Galdós provides in his first novel an approach that would underlie his lengthy career.