Marginalia on Casanova by Miklós Szentkuthy: introductory notes and links 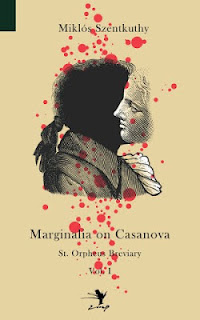 This is one of the strangest and most enjoyable books I’ve read in quite a while. I have hesitated to write about it but I think I'm ready to give it a try. At first the book appears to be Szentkuthy’s comments on Casanova’s History of My Life, but the scope quickly expands to include a study in the underlying philosophy of Casanova’s works in addition to a commentary of his time (and a comparison with the 20th century).

So what is the St. Orpheus Breviary? From the Afterword by Mária Tompa (ellipsis in original):

In his [Szentkuthy’s] 1976 memoir Recollection of My Career, this is how he refers to it: “Among the huge amount that I learned from Antal Szerb I ought to list my real acquaintance with the eighteenth century. It was he who inspired the Casanova commentaries of Orpheus… The structure of my commentaries was determined by the structure of the 1919 magnum opus of the Protestant theologian Karl Barth to the Epistle of St. Paul to the Romans

In 1938, Szentkuthy read the Römebrief of the famous Protestant exegete Karl Barth, a commentary that is based on an analysis, phrase by phrase, even word by word, of the Epistle to the Romans. Literally enchanted by the effectiveness of this method—“where, in his words, every epithet puts imagination in motion”—he decided to apply it on the spot to Casanova, whose memoirs (a German edition in six large volumes) he had just annotated with gusto.

There are ten books in the St. Orpheus Breviary, the last volume (or is that the last two volumes?) unfinished. By the way, a translation of the second volume, Towards the One and Only Metaphor is scheduled to be released later this year by Contra Mundum (and more from this author is scheduled). [Thanks to reader JC Buckley for the correction] Why Orpheus in the title? From Szentkuthy’s prospectus for the first volume:

The name “Orpheus” expresses the underlying conceptual tone: Orpheus wandering in the underworld is an eternal symbol of the brain straying among the dark secrets of reality. The aim of the work is, firstly, to portray the reality of nature and history with ever more extreme precision, and secondly, to display through variations in the history of the European mind an observer’s every uncertainty, the fickleness of emotions, the tragic sterility of thoughts & philosophical systems. The reason for placing the epithet “Saint” before “Orpheus” is because the work seeks to portray both European history and the vegetative world of nature from an essentially religious, supernatural viewpoint. Although both the lives of the saints, as well as the other figures, famous books, and cultural manifestations of history are, in point of fact, nothing more than different features of a lyrical self-portrait, the various roles and masks of the author as it were, the work is in essence “religious,” because form love to politics the emphasis throughout is on the battle of the body-politic of God and the body-politic of the world.

I’m not sure I got all of that while reading the book but several points shine through in this volume. Mária Tompa’s Afterword provides a good overview of Marganalia on Casanova, highlighting the emphasis on that ‘battle’:

In reality it is a reader’s diary divided into 123 numbered sections which provides a picture of Casanova’s personality extending to highly comprehensive, balance, and minute psychological details. Szentkuthy gives an extremely detailed analysis not only with regard to his accomplishments in seducing women, but his intellectual and mental endeavors, his psychological and emotional stumbling blocks—much of it with great subjective vehemence.

I have to mention the structure of the Breviary: a Vita (Life of a Saint) and Lectio (Saintly Reading). Szentkuthy had written the first six volumes in the series without including “Life of a Saint” sections but decades after their initial writing he added them. The saint included in Marganalia on Casanova is Alfonso Maria di Liguori (1696 – 1787).

OK, more on the actual marginalia in a separate post.

Links:
Wikipedia bio on Miklós Szentkuthy
Contra Mundum’s page for the book
Review and links at the complete review
A review at the Guardian
Links at Hungarian Literature Online:
Boudoir & Theology (used as the book’s Introduction, by Zéno Bianu)
Excerpt (the first 12 sections)
Review, notes

I look forward to reading your thoughts on Marginalia - like you, I was fascinated by it, but I'm not sure that I could make much sense of my experience of it just at the moment. One thing - are you sure that Towards the One and Only Metaphor is the second part of the sequence? I was under the impression that it predates the Marginalia.

Oops...you are correct. I will fix that in the text. The translation is still coming out, fortunately.

And I'm not sure I can make sense of it now! I hope to have some time later this week to write that second post.