Off the Beaten Track in the Classics by Carl Kaeppel: Aristarchus of Samos 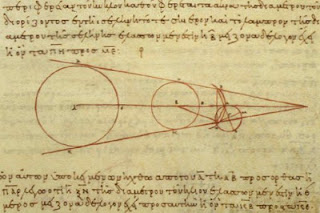 10th century CE Greek copy of Aristachus Samos's 2nd century BCE calculations
of the relative sizes of the Sun, Moon and the Earth
Picutre source
Off the Beaten Track in the Classics by Carl Kaeppel (Melbourne: Melbourne University Press, 1936)

So stupendous is the work of the Greeks in art, literature, and philosophy that there is a tendency, even among those devoted to the study of the Greek spirit, to overlook or take for granted their achievements in other fields, e.g., medicine, geography, or mathematics.

That is my excuse for commenting in this brief study on Greek mathematics in general and for providing a short account of a great and original genius, Aristarchus of Samos, who put forward the heliocentric hypothesis nearly two thousand years before Copernicus.

To disregard the Greek interest and achievement in natural science and mathematics is, in fact, to miss the cardinal characteristic of the Greek genius—its many-sidedness.

"Fridays with Carl Kaeppel" continues with the next chapter in Off the Beaten Track in the Classics, focusing on mathematics in general and Aristarchus of Samos in particular. I’ll plead guilty to Kaeppel’s charge of overlooking or taking for granted achievements in other fields in classical Greece, even though I know many of them. In place of a bibliography of Greek mathematics, which he says would run many pages, Kaeppel recommends Sir Thomas Heath’s History of Greek Mathematics (as well as Heath’s “translation of The Thirteen Books of Euclid’s Elements, with introduction, notes and appendices; his Works of Archimedes, and last but not least, his definitive edition of Aristarchus.”) There are other works by Euclid, Archimedes, and Apollonius in the Teubner Series by Heiberg he recommends, too. Keep in mind Kaeppel was writing in the mid-1930s.

Some quotes and summaries from Kaeppel’s essay:


I wish Kaeppel had followed up on the charge by Cleanthes. From this essay by Immanuel Velikovsky I found out that Cleanthes’ charge was in a tract titled “Against Aristarchus” and that it was about 150 years before we see followers adopting Aristarchus’ theories. Velikovsky also points out that Hipparchus, a well regarded contemporary of Aristarchus, rejected Aristarchus’ conclusions on a heliocentric model based on scientific grounds, not religious ones (like Cleanthes’ charges). If anything, these additional points help reinforce Kaeppel’s point on how fragile civilization and its advancements can be. Not to mention how charges of impiety weren't limited to philosophy and that junk science has been with us for a long time.

Links:
Aristarchus info at Wikipedia
The link to Immanuel Velikovsky's essay (again)
Another Aristarchus biography, this one at University of St Andrews, Scotland's School of Mathematics and Statistics
Posted by Dwight at 6:56 PM

Email ThisBlogThis!Share to TwitterShare to FacebookShare to Pinterest
Labels: Aristarchus, Carl Kaeppel, Off the Beaten Track in the Classics

It's a fun read, especially in bite-size pieces. Availability is hit or miss, so track it for a while before buying (or interlibrary loans are always a great alternative).

Peter Green gives quite a few pages to Hellenistic mathematics and science in From Alexander to Actium, his large and most interesting history of the Hellenistic era.

Thanks for the tip. I've read his biography of Alexander but not that book...I'll have to fix that!

By the way, Green has since brought out a much shorter history of the Hellenistic period, which I have not read. B

I think I may have that short volume somewhere around here...which shows I haven't read it either. The TBR stack keeps growing.

I looked up the ILL information, and I could get it, but then I'd have to power through the whole thing. Since the only abebooks copies are in Australia, though, I think I'll take that option...