Off the Beaten Track in the Classics by Carl Kaeppel: The Periplus of Hanno 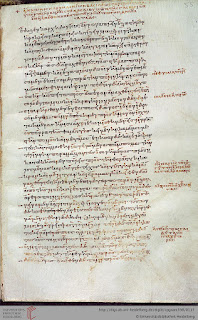 For the most part the student must lament that ‘the iniquity of oblivion’ has overtaken work of the utmost value, but sometimes a precious survival is a reason for thankfulness. There is the case of Hanno’s Periplus. Short though it is, I doubt whether any single document is of greater importance historically or geographically.

The Periplus is, in brief, a Greek translation of the record, in the explorer’s own hand, of perhaps the greatest achievement of ancient seamanship—the voyage of exploration and colonization of the Carthaginian Hanno (c. 500 B.C.) along the west coast of Africa, certainly as far as Sierra Leone (N. lat. 7˚ 45’).

It has survived by the slenderest of chances. The original Semitic version, posted in the Temple of Melkarth at Carthange, has perished and the Greek translation survives only in a single manuscript (Heidelberfensis 398). Exactly when the translation was made we cannot say, but it was extant at an early date, being first quoted by Pseudo-Aristotle (De Mirab. Auscult., 37), and most probably was known to Ephorus (c. 340 B.C.).

I doubt the Periplus of Hanno would be considered off the beaten track when it comes to the classics, and it wasn’t even in Keppel’s day (given the number of works listed in his bibliography). Today there is a webpage dedicated to Hanno’s Periplus on the Web with all sort of wonderful links—please be sure to check it out, especially the literary echoes section. There are several translations available at the page, too. Unfortunately some of the links are broken. For someone mentioned by Arrian (in his Indica), has a song by Al Stewart about him, and debates raging on authenticity, Hanno’s fame has been fairly steady for the 2,500 years since his trip.

Kaeppel touches on the topic of forgery or the report’s fabrication, briefly noting that attempts to disprove it have been unconvincing and unsuccessful. He then spends quite a bit of time confirming the date of c. 500 B.C. for the trip and record. Kaeppel includes the text of the periplus, in Greek and Karl Müller’s translation, and then walks through the work making comments along the way. This is the fascinating part of the essay, especially when he includes how parts of the story filtered into other works. Regarding the island of Cerne:


Its subsequent history is interesting. After the destruction of Carthage, her Atlantic colonies declined and finally disappeared. The best analogy to this is the history of Norse Greenland. But even after Cerne had disappeared from the map the name remained as a place of myth and legend among such writers as Lycophron, Paleaephatus and nonnus. Palaephatus, e.g., puts three Gorgons in the Cernean Islands, and Diodorus both the Amazons and Gorgons. On the other hand Strabo, who apparently had never heard of the periplus, censures Eratosthenes for admitting the existence of the island (I, 3, 47).

Kaeppel enjoys presenting what he calls preposterous theories, then puncturing their logic. One thing he doesn’t seem to account for, though, is possible changes in geography. For example he locates in today’s terms where “the wild men clothed in skins (Guanches) who pelted them with stones” would be but comments that the statement “’overhung by lofty mountains’ is certainly an exaggeration.” Maybe not in Hanno’s time, though.

Near the end of the periplus there are a couple of stories that have captured the imagination and caused plenty of discussion over the years. The first has to do with the “streams of fire” and “pillars of fire.” As I mentioned in the previous post on the book, Kaeppel doesn’t tend to pull his punches:


To this day, as Sir Harry Johnson has told us in his Liberia, it is the custom of the natives to burn off the dry grass and bush at the end of the rainy season, thereby causing the most awe-inspiring conflagrations. It is quite a ceremony and is marked by much music (!) and shouting. The practice has been noted by many explorers from Pedro de Cintra (1462 A.D.) to Mungo Park (1800 A.D.). We shall let the latter speak for himself (Travels in the Interior of Africa, ch. VI):


'The burning of the grass exhibits a scene of terrific grandeur. In the middle of the night I could see the plains and mountains, as far as my eye could reach, variegated with lines of fire; and the light reflected on the sky made the heavens appear ablaze. In day-time pillars of smoke were seen in every direction.'

It is only the stupidity of commentators who have insisted on translating ρύακες as 'streams of lava' (it can, of course, also have that meaning) that has caused Hanno’s veracity to be questioned.

But before leaving the fire stories [note: there seems to be a repetition in a fire story in paragraphs 15 and 16] we should note that few classical wonder-tales have taken such a hold on the imagination as the picture of the place silent by day but blazing with fire and resounding with noise by night. Pseudo-Aristotle, Pliny, Diodorus, Mela, and, finally, Solinus, all retell the tale—with additions; and, as we have noticed elsewhere, through Solinus it becomes one of the favourite mediaeval legends.

I have a new phrase for completely disagreeing with someone: “That's stupid: it can, of course, also have that meaning”. As you can see, there is a lot of conjecture on what exactly Hanno saw and described. Kaeppel points out that in paragraph 16 “Hanno does not say it was a volcano in eruption, but simply that it was a tall mountain whose sides were alight.” Mount Cameroon has been the frequent placing of this sight, although Kaeppel conjectures it is Mount Kakulima. Kaeppel also looks at the last paragraph and the killing and skinning of what Hanno’s interpreters called “gorillas” (and also an interesting sidenote of how the term ‘gorilla’ came to its present meaning because of Hanno). Not surprisingly, Kaeppel believes what Hanno encountered were chimpanzees, better fitting his description of what he found. The essay closes in looking at mentions of the African coast in later accounts, such as:
The essay ends looking at the possibilities of Carthaginians visiting and settling other African island groups, particularly the Canaries, Madeiras, and Azores (Kaeppel’s judgment, in order: probably, possibly, unlikely).

While the bibliography section of Kaeppel’s essay is somewhat dated, it is a helpful list of reports and criticisms. There’s also a section for the unmasking of forgeries related to the periplus. I’m including a few additional links I found interesting in connection with Hanno’s work:
A translation of the text and discussion of it
Two translations of the text and a Google map of the possible route
Text and commentary side-by-side
Another translation, with a map showing other Phoenician voyages and routes to help put Hanno’s trip in context. 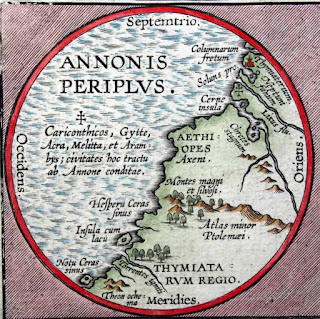 
Update: I meant to include some other notes on Hanno’s Periplus but hit the ‘publish’ button too early. Richard Miles’ book Carthage Must be Destroyed: The Rise and Fall of an Ancient Civilization spends several pages on Hanno’s trip, speculating on what some of the passages mean and, most importantly, putting his trip in a bigger picture of Carthaginian trade and exploration (see pages 82 – 86, hardcover).

In The Landmark Herodotus, Appendix D is on Herodotean Geography (written by James Romm and James H. Ottaway). §5 has some interesting points on what was and wasn’t available to Herodotus:

Much of that knowledge came from the voyages of exploration which the Greeks, Phoenicians, and Egyptians had begun undertaking, both within the Mediterranean and outside it, starting shortly before Herodotus’ time. Indeed, Herodotus lived in a golden age of geographic discovery, though because the means by which explorers published their finds were not far advanced, he was not always aware of what had been learned. … [T]he voyage of Hanno the Carthaginian down the west coast of the Africa may have taken place too late for Herodotus to have learned of it.

Romm and Ottaway mention tale and reports that Herodotus would have known, such as a “different West African voyage led by Sataspes, a Persian” (4.42) and the tale of a Phoenician crew (4.43), voyaging for the Egyptian pharaoh Nechos (which may or may not have happened as told). Apparently trade between the Carthaginians and the natives on the west coast of Africa was fairly common given Herodotus description of the way transactions were made in 4.196.

Update (5 Feb 2017): Gabe Bakale at The Classical Association of New England has posted a link to an additional translation and some work student activities/worksheets to supplement the text.

Email ThisBlogThis!Share to TwitterShare to FacebookShare to Pinterest
Labels: Carl Kaeppel, Off the Beaten Track in the Classics, The Periplus of Hanno