Behind the Lines by Jaroslav Hašek 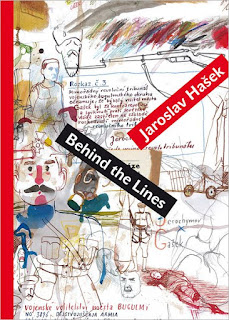 Behind the Lines: Bugulma and Other Tales by Jaroslav Hašek
Translation by Mark Corner
Afterword by Robert B. Pynsent, Illustrations by Jiři Grus
Published by Charles University in Prague, Karolinum Press
ISBN 978-80-246-2013-8

Jaroslav Hašek is best known for the satirical novel The Good Soldier Švejk but he also wrote close to 1,500 short stories. Fourteen of these stories are gathered in this beautiful, slim volume with translations by Mark Corner. Radio Prague has an interview with the translator and several excerpts from the stories. Another interview with Mark Corner can be found at The Prague Post. I’ll also link to the book’s page at The University of Chicago Press, distributor for the book outside the Czech Republic and the Slovak Republic.

Robert B. Pynset’s Afterword presents the similarities between Hašek’s life and these stories that take place in Bugulma, a town in Russia (Tartarstan) where the author had been a Red Army officer. The stories chosen for the collection (the article above calls it a “cross section”) present a semi-coherent story of some adventures by the character Gašek, starting with his elevation to Commanding Officer of the Town of Bugulma in early October 1918. What follows is something very different from Švejk—the reader finds a competent officer maneuvering through a black comedy, punctuated with satire but in a much more professional manner. As Pynset’s Afterword points out, Gašek is a far cry from Švejk but isn’t Hašek, either. Even though many of the events are based on actual events, “Hašek’s intention is satire, not verisimilitude.” “These stories, with some exceptions, manifest Hašek’s old fascination with, indeed often affection for, outsider groups, here Tartars, Buryats (it is said that Hašek founded Buryat journalism), Circassians and other non-Russians.”

Even with his fascination, Hašek still adds plenty of satire in with his stories of these outsiders. In the opening story, the pagan priest of a nearby town was brought before Gašek with a cage containing three white squirrels, said to be the pagans’ gods. After baptizing the priest, Gašek hands the cage over to his bodyguards: “My fine fellows then proceeded to skin the gods of the Cheremisses. I can assure one and all that you can make a fine soup out of a Cheremiss deity.”

One similarity between Švejk and Gašek is their belief in following directives or the rules, although their outcomes from doing so diverge. Švejk’s literalness undermined the rules and pointed out the absurdities of bureaucratic systems. Gašek believes in the necessity of the bureaucracy, even if he bends the rules or recognizes the damage from competing agencies in the bureaucracy. Gašek, as Commanding Officer of Bugulma, has to deal with Comrade Yerokhimov, commander of the Tver Revolutionary Regiment stationed near and in Bugulma. The first order of business for either leader of the city is publishing official pronouncements and Yerokhimov’s first order sets the tone for his relationship with Gašek:

To all citizens of Bugulma! This very day, following the fall of Bugulma, I have taken over as your Commanding Officer. I am hereby dismissing your former Commanding Officer [Gašek] from his post on grounds of incompetence and cowardice and am appointing him my second-in-command.

For additional satire, Gašek’s workmanlike behavior creates misunderstandings that he doesn’t comprehend. In order to get barracks ready for an arriving cavalry contingent, Gašek sends an order to the abbess of the nearby convent to send “fifty virgins” at once “to be placed at the disposal of the Petersburg Cavalry Regiment.” The nuns, of course, assume the worst since Gašek doesn’t specify what they will be doing.

Even with the belief in the necessity of administration and wholehearted support of the revolutionary cause, Hašek can be less than complimentary of party officials. A three-member Committee of the Revolutionary Council of the Eastern Front arrives to evaluate charges Yerokhimov has telegraphed about Gašek. The commanding officer sizes up the members of the committee, noting that what drove some officials wasn’t productive:

The third member of the revolutionary tribunal was the one with the most radical opinions of all. He had worked as a clerk for a Moscow lawyer who once provided sanctuary for the White General Kalenin when he was in hiding. This lawyer was, in Agapov’s words, the worst villain in the world, because he paid him no more than fifteen roubles per month. This was only a third of what he gave to the waiter in the Hermitage as a tip when the man brought him a slice of salmon, asking in return merely that the man would let him spit in his face.

His whole appearance highlighted the fact that all the events preceding the fall of Tsarism had turned him into something cruel and implacable, a hard and terrible human being. He had settled accounts long beforehand with those who paid him those miserable fifteen roubles. He was a man doing battle with phantoms of the past, bathing his surroundings wherever he went in the dull glow of suspicion and making out the forms of traitors unknown.

As Mark Conner points out in his interview in The Prague Post, “One important thing was to bring to life Hašek as a short-story writer, and even the short story as the medium at which Hašek excelled.” After reading this sample, I’m inclined to agree. I also want to mention my enjoyment of the two books I’ve read so far from the Karolinum Press, Charles University (the other book was Summer of Caprice by Vladislav Vančura, also translated by Mark Corner). After Švejk, I have trouble imagining Hašek without accompanying illustrations and the ones provided in this volume by Jiři Grus are delightful.

Also a word of thanks to Levi Stahl at I’ve Been Reading Lately for soothing my impatience on the availability of this book (the release date kept getting pushed). 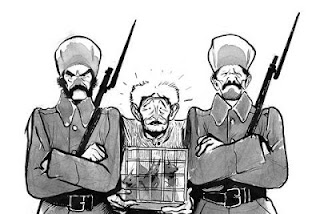 Cheremiss deities, one of Jiři Grus' illustrations
From The Prague Post article.
Posted by Dwight at 11:12 AM

Email ThisBlogThis!Share to TwitterShare to FacebookShare to Pinterest
Labels: Behind the Lines, Jaroslav Hasek, Jaroslav Hašek

It's hard to comprehend that many, isn't it?

I never read a line of Hasek, but several months I quoted Joraslav Seifert on him, in my blog:

That's definitely the image everyone has of Hasek now, whether deserved or not.

Hašek did write close to 1,500 stories, although many of them using pseudonyms.

I didn’t know that about the pseudonyms. My sampling is painfully small (1% of the total output), although I hope to increase that by a point or two soon. Some of the examples in this collection I would term “vignettes” instead of stories, as they provide scenes related to an overall story arc. Which, if you think about it, describes some large chunks of Švejk. I don’t know how representative some of these vignettes/stories are of other works, though.