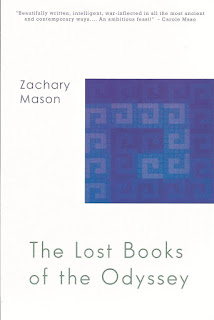 The second edition of the book, published by Farrar, Straus, and Giroux, made some major changes from the first edition. Taoko’s second footnote covers the bulk of the modifications:

Changes include the addition of two chapters (“No Man’s Wife” and “Epigraph”), the deletion of the Introduction, Appendix, and three chapters (“After Coming Home,” Fox,” and “Endless City”), and the transposition of three chapters (“Sad Revelation,” “Fireworks,” and “Record of a Game”). In general the second edition creates more continuity between chapters, and eliminates the mathematical superstructure borrowed from Italo Calvino’s Invisible Cities.

Also included at the end of the book’s first edition, along with the typesetting information, is the Author Biography:

Zachary Mason was educated at Trinity College, the University of Michigan, and the Sorbonne. He is currently the John Shade Professor of Archaeocryptography and Paleomathmematics at Magdalen College, Osford. He divides his time between Oxford and the Greek island Ogygia. He lives with his cats, Talleyrand and Penthesilia.

If the Nabokov reference doesn’t bring a smile to your face, this book isn’t for you. In the paper Taoka spends a lot of time explaining how the final chapter, “Endless City,” works, both from the organizational standpoint (encapsulating previous chapters while continuing the narrative) and the looping, Mobius-strip like framework. It’s a helpful explanation that shows how the chapter should be read.

Taoka also touches on the imagery in the book that graphically depicts what Mason does narratively in the book. The introduction goes into detail on how the lost books were translated using a combination of keys—Taoka ties the names used in titles to chapters of Calvino’s Invisible Cities as decoding keys (see footnote 12). There is so much wonderful stuff going on in these books that it’s helpful to have a guide. I highly recommend the paper and the original edition of the book, especially for anyone that enjoyed the FS&G edition.