Instant movie for the weekend: Senna

Senna’s remarkable story, charting his physical and spiritual achievements on the track and off, his quest for perfection and the mythical status he has since attained, is the subject of SENNA, a documentary feature that spans the racing legend’s years as an F1 driver. Far more than a film for F1 fans, SENNA unfolds a remarkable story in a remarkable manner, eschewing many standard documentary techniques in favor of a more cinematic approach that makes full use of astounding footage, much of which is drawn from F1 archives and previously unseen.
(from the Senna movie website)

At the risk of making the blog seem more a movie site than about books (I've haven't finished Krasznahorkai's Satantango yet)...

I want to recommend the documentary Senna, about Ayrton Senna, one of the greatest Formula One racing drivers. I know I've mentioned this one previously but I want to do so again since it is on Netflix's instant streaming now. My wife is anything but a racing fan but she enjoyed the movie when I dragged her to it last August.

As I said in the earlier post, the film has an obvious bias in Senna's rivalry with Alain Prost and I wish they had focused more on certain areas, but it's still a remarkable film. 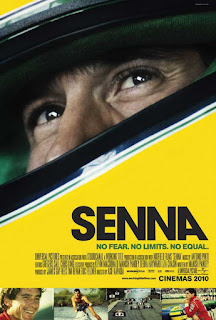 Thanks--I thought I would go with something out of the ordinary for anyone reading here but a movie I found extremely enjoyable.

I wasn't sure what to expect when Dwight brought me to see Senna. I didn't know who Senna was or why anyone would care to make a documentary about him. I was pleasantly surprised to fine that Senna had quite an interesting life story and the film was well paced and put together to capture the essence of this larger than life racing icon. In the end I really enjoyed this movie.