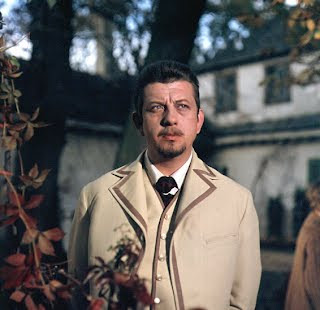 I am always interested in watching movie adaptations of books I’ve read and enjoy passing along the ones I watch. In the case of The Doll, I realize the English translation edition is not easy to find (WorldCat shows 15 libraries have it available in VHS format) but this movie, directed by Wojciech Jerzy Has, is definitely worth a mention. Since the plot can be found elsewhere I'm going to take a quick look at how the movie compares to the novel by Bolesław Prus.

So how do you condense an almost 700 page novel into 2 ½ hours? Obviously by cutting a lot. Major characters (Helena Stawska and the students) and storylines (the trial that leads to the title of the book or Wokulski’s visits to Mrs. Stawska) are notably absent. Several characters are shown but are given no introduction or explanation of their relationship to Wokulski, such as Szuman and Suzin. Ochocki, representative of the younger generation, has limited appearances in the film. Significant events, like Wokulski’s trip to Paris, are only mentioned and their absence creates a jarring effect. Even with those omissions and slights, the movie remains fairly faithful to the novel and I was surprised at how much was included.

The biggest disadvantage the movie has to overcome is the lack of the inner world of the characters that Prus takes time to explore, such as entries from Rzecki’s journal or Wokulski's and Izabela's monologues. Wokulski's character provides an interesting challenge on how to portray him. In the novel there are several factors that cause his downfall, the most important being the combination of his romanticism and idealism. Wokulski’s bitterness at not being accepted in the upper classes (causing him to question his own ability) and Izabela’s inability to fully commit to him also play roles in his tragedy in the novel. These last two causes are what Has stresses in the movie and Mariusz Dmochowski does a fantastic job portraying the resulting tensions. There are other nice touches that remind me of the novel, such as Has repeatedly showing Wokulski’s hands, covered and uncovered, a symbol of his lowly station as well as reminders of his exile (they were frostbitten while he was in Siberia). In addition, Beata Tyszkiewicz plays Izabela perfectly. In the novel Izabela proves to be a little hollow at the center. Has and Tyszkiewicz use that to their advantage in the movie where many pages are compressed into brief scenes, giving the viewer the same feeling of her character's emptiness.

Has adds some nice touches that expand certain scenes, such as the gypsy band and feast after the duel between Wokulski and the Baron, making a bizarre scene even more peculiar. Wokulski’s farewell to Izabela at the train station is expanded, making it clear he understood her flirtations conducted in English and amplifies her shock. At times Has uses similar action in different scenes to add to the dramatic effect, such as the prostitute and Ochocki shadowing Wokulski at different times through a poor district of Warsaw.

The English subtitles (on the version distributed by Polart) leave a lot to be desired. The frequent misspellings were distracting. And did the country dweller have to have a Cockney accent in print? But that’s the only real complaint I have about the movie other than the occasional jerkiness due to time constraints. I don’t believe reading the novel is necessary but knowing something about the book will be helpful to fill in the blanks or place unintroduced characters. Given those qualifications, I highly recommend the movie.

The YouTube video below shows the opening of The Doll. While it doesn't have subtitles, I wanted to include it in this post because the first scene hints at Has' focus on poverty in Warsaw at the time of the movie (1878-9), a situation he highlights several times with good results. The second scene in the clip shows Ignacy Rzecki (in top hat, with goatee) meeting a young Stanisław Wokulski. Rzecki sees some of the inventions Wokulski had worked on as well as the prank the other clerks at Hopfer's grocery play on him, ridiculing him and his desire to go to the university.

Very interesting. Your posts are actually double introductions, to the books and the movies. I'm sadly underread in Eastern European literature and movies.
The subtitles in older movies are a big problem I find. Especially if I know both languages I notice weird things.
The cockney to show that he is from the country is like another problem I have regularly with fake accents...

I have been underread in that area as well but I'm working on correcting it!

The scene I mention where a couple of the characters speak English proves to be useful because the English translation flashes on the screen for the Polish audience. It ended up being fairly faithful, which for some reason may me feel better. Also, the English subtitles were done before David Welsh's translation used in the Central European Press (and later NYRB) but they prove to be very much aligned for conversations used straight from the book).

It's been interesting to see so many book-to-movie reviews from you this year. I've been kind of operating the other way (unintentionally, of course) recently: watching and/or reading about movies where I might like to read the source books at some point.

I've done that deliberately since that's the direction I like to go. Although I can appreciate spending two hours on a movie to see if you're interested in spending a lot more time on a book (I don't think I'm going to watch the 7+ hour movie adaptation of Satantango, although I may change my mind).

I'll have at least a couple more Polish book/movie combinations this year--one famous, one forgotten.