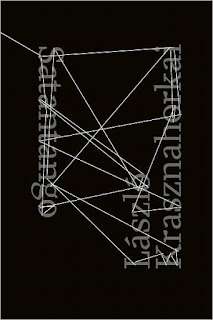 Who
Author: László Krasznahorkai, a Hungarian writer born in 1954.

Principle characters in The First Part:
Futaki—former mechanic in village, lame.
Mr. and Mrs. Schmidt—village slattern (and lustful object of those males she hasn’t slept with) and her short-tempered little husband
Mr. and Mrs. Kráner—villagers; Rosie occasionally takes care of doctor
Mr. (Lajos) and Mrs. Halics—she is village would-be evangelist (“we are living in apocalyptic times!”)
Headmaster—former teacher; all bluster
Doctor—villager who records everything; obese alcoholic; tries not to leave his house (or even his window)
Irimiás—unknown quantity; savior of the village? police informant? con man? all of the above?
Petrina— Irimiás’ sidekick; jug-earred; József
Kelemen—local bus driver
Landlord—bar owner (wife is mentioned but not shown); János Mopsz
Mrs. Horgos—widowed; even more good for nothing than the other villagers
Two eldest Horgos girls—town prostitutes (Juli is the eldest, the youngest is Mari)
Esti Horgos—youngest Horgos; called idiot child, retard, etc.; abused by mother and brother
Sándor (Sanyi) Horgos—male kid of family; lied eighteen months earlier, saying Irimiás and Petrina had been killed; desires to accompany them
Kerekes—farmer; big, strong

Irimiás’ opinion of the villagers:

"Servants is what they were and that’s what they’ll remain until they die. They’ll be sitting in the kitchen, shitting themselves in the corner, taking the odd look out of the window to see what the others are doing. … They’ll be sitting in exactly the same place, on the same filthy stools, stuffing themselves with the same filthy spuds and paprika every night, having no idea what’s happened. They’ll be eyeing each other suspiciously, only breaking the silence to belch. They are waiting. They’re waiting patiently, like the long-suffering lot they are, in the firm conviction that someone has conned them. They are waiting, belly to the ground, like cats at pig-killing time, hoping for scraps. …They are slaves who have lost their master but can’t live without what they call pride, honor and courage. That’s what keeps their souls in place even if at the back of their thick skulls they sense the qualities aren’t their own, that they’ve simply enjoyed living in the shadow of their masters. … “They, wherever the shadow falls they follow, like a flock of sheep, because they can’t do without a shadow, just as they can’t do without pomp and splendor either, … they’ll do anything not to be left alone with the remnants of pomp and splendor, because when they are left alone they go mad: like mad dogs they fall on whatever remains and tear it to bits. Give then a well-heated room, a cauldron bubbling with paprika stew, a few dogs, and they’ll be dancing on the table every night, and even happier under warm bedclothes, panting away, with a tasty piece of the neighbor’s stout wife to tuck into."
(pages 42-3)

What
The recent release of the English translation of Satantango, Krasznahorkai’s first novel.

Part of the plot of the first part of the book: introduction to principle characters, some directly, a few indirectly. On the day a surreptitiously raised herd of cattle has been sold for cash the villagers are shocked to hear Irimiás and Petrina were not killed eighteen months earlier as reported. Expectations build in the village as they wait for Irimiás’ return. Here are some of Futaki’s thoughts as many of the villagers gather to wait at the bar:

[A]s Petrina said at the time, Irimiás was “an angel of hope to hopeless people with hopeless difficulties.” But there was nothing to be done with bottomless stupidity: no wonder he walked away in the end. And the moment he vanished things ran straight downhill and the community plunged to ever-lower depths. First cold and ice, then foot-and-mouth disease with piles of dead sheep, then wages a week late because there wasn’t enough money to pay them,…though by the time it got to that state everyone was saying it was all over, and that they’d have to close up shop. And that’s what happened. Those who had somewhere to go cleared off as fast as they could; those who didn’t stayed behind. And so began the quarrels, the arguments, the hopeless plans where everyone knew better than anyone else what should be done, or else pretended that nothing had happened. Eventually everyone was resigned to the sense of helplessness, hoping for miracles, watching the clock with ever greater anxiety, counting the weeks and months until even time lost its importance and they sat around all day in the kitchen, getting a few pennies from here and there that they immediately drank away in the bar.
(page 152, ellipsis in original)

Setting: indeterminate. It’s clear authorities are in charge, but are never identified as Communist. A couple of characters are mentioned as having been in a prisoner-of-war camp, although which war is not specified. The book’s action takes place over several days at the end of October as the rainy season begins.

Where
Setting: an isolated small village in rural Hungary (and a nearby town for a couple of chapters). The authorities have abandoned the industry performed in the village, stripping the hamlet of machinery and almost everything of value. Villagers are described as having lived “years of wretched misery.” The doctor’s thoughts about what the village will be like as the rainy season gets underway:

The doctor thought back to last year’s autumn and to those of earlier years and knew that this was how it would have to be; that, apart from a brief break of sunshine that lasted a few hours, or at most a day or two, it would pour down steadily, without a pause, right until the first frosts so that the roads would become impassable and they would be shut off from the outside world, from town and from the railways; that the constant rain would turn the soil into one enormous sea of mud, and the animals would vanish into the woods … because the mud would kill off all forms of life, rot the vegetation and there would be nothing left, just the ankle-deep cart tracks of the end of summer that had filled up with water, as well as the nearby canal, would be covered over with frogspawn and reeds and tangled weeds that in the evening or early twilight, when the moon’s dead light reflected off them, would glitter all over the body of the land like a galaxy of tiny silvery blind eyes gazing up at the sky.
(pages 63-4)

How
Satantango is anything but straightforward. And yet it is. Plopped down in the middle of the action and given no context the reader immerses himself in order to figure out the who, what, when, where, and how of the story. The prose provides a rhythmic pattern, hypnotic in its cadence and intricacy. The story follows the rhythm of its prose, giving a feeling of advancement while moving in a circle.

He [landlord] was sure that even if he [Keleman] wanted to tell the truth in a straightforward fashion the man was incapable of doing that, so he never assumed too much about the first version of events, merely noting that, “Something might have happened.” But what precisely happened, that could only be determined by a maximum joint effort, by hearing ever newer and newer versions of the story, so that there was never anything to do but wait, wait for the truth to assemble itself, as it might at any moment, at which point further details of the event might become clear, though that entailed a superhuman effort of concentration recalling in what order the individual incidents comprising the story actually appeared.
(page 98)

While the novel explores the nature of storytelling, both in the story itself and how it is told, there are other recurring themes and motifs. The constant rain adds to the atmosphere of gloom and decay, nature joining all the other adversaries aligned against the villagers. Their hopes and trust, both continually misplaced, survive despite their dreams being dashed time after time. They blindly and erroneously assign meaning and significance to events. Worst of all, innocence and purity (such as in Esti) provides no protection in such a gloomy and doom-laden world.

This post was meant to be a whimsical approach to Satantango, a book I highly recommend. If you need a direct recap of the novel (or maybe bookmark for later reading), see Hungarian Literature Online. The site also has an interview with Krasznahorkai. For another interview with Krasanahorkai, see The Quarterly Conversation. They have a recap of the book, too.

Update (12 Sep 2012): László Krasznahorkai Reads from Satantango and discusses the novel with James Wood (courtesy Now That it's Now, the New Directions blog)

Update (2 Dec 2012): For a more rounded review than my post, see Max's post at Pechorin’s Journal, which includes many more links in the comments. 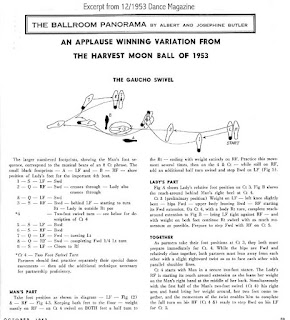 Picture source
Posted by Dwight at 9:25 AM