The Tree of Knowledge: summary 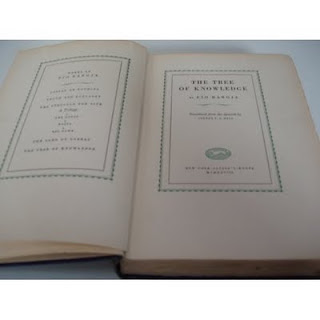 Title page of The Tree of Knowledge by Pio Baroja, translated by Aubrey F. G. Bell (Alfred A. Knopf, 1928)

Posts on the novel:

(Parts 2 – 3) Charity seemed to have fled from the world

(Parts 5 – 7) Nature has resources which are unknown to us

It may be reading too much into the novel to say that it seems to trace the development of Baroja, from the beliefs of Andrés to those of his uncle Iturrioz. The central part follows a discussion between the two men as Andrés argues for the primacy of science (knowledge). His uncle, however, promotes a practical approach for life. He does not say to abandon the search for knowledge but to recognize its limits. Andrés ignores this advice, practically and symbolically throughout most of the book. This being Baroja, things do not progress linearly but take on many incongruities and present several paradoxes.

As I said in the previous post, I found it very enjoyable and highly recommend it if you can find it. I'd also love to hear from those that are familiar with Baroja and their impression of him and his work...

Email ThisBlogThis!Share to TwitterShare to FacebookShare to Pinterest
Labels: Pío Baroja, The Tree Of Knowledge

Here in Spain, We had to read that in highschool.

It's a great book and it really influenced me.

I highly recommend u "La Busca"

Thanks so much. Regarding La Busca, I wrote about it here. I quite enjoyed discovering Baroja!

The tree o life could have spared humanity from troubles, but God never wanted robots. The search for knowledge alone will lead to destruction, but the search for wisdom produces abundant life.