A Grand Day Out

"Sightseeing is the art of disappointment."
Robert Louis Stevenson (incorrect in this instance) in The Silverado Squatters 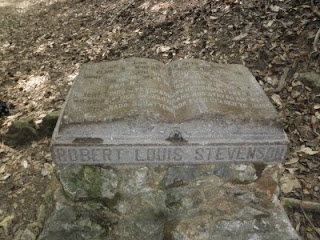 Left side:
This tablet placed by
the Club Women of Napa
County marks the site
of the cabin occupied in
1880 by
Robert Louis Stevenson
and bride while he wrote
The Silverado Squatters.

Right side:
"Doomed to know not Winter
only Spring, a being trod
the flowery April
blithely for a while
took his fill of music,
joy of thought and seeing
came and stayed and went
nor ever ceased to smile."
RLS

See In Memoriam F.A.S. for the source of the quote.
Also see the California landmarks page for additional pictures. 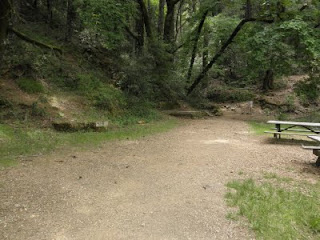 A perfect place for croquet, as Stevenson noted. A short hike takes you to the location of the office/bunkhouse that Steveson and his wife "squatted" in during the spring and summer of 1880. The rock wall where the structure stood still looks imposing. 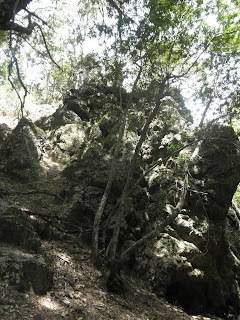 Stevenson mentioned the wind quite a bit in his book, noting that the area below this ridge would escape the occasional gale. I noticed that the wind increased markedly as the day warmed up. The opening to the abandoned mine lies across a clearing and up a steep hill. 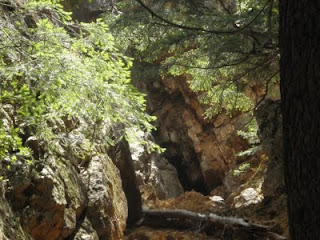 The scene of this little book is on a high mountain. There are, indeed, many higher; there are many of a nobler outline. It is no place of pilgrimage for the summary globe-trotter; but to one who lives upon its side, Mount Saint Helena soon becomes a centre of interest. It is the Mont Blanc of the California Coast Range, none of its near neighbours rising to one-half its altitude. It looks down on much green intricate country. ... Its naked peak stands nearly four thousand five hundred feet above the sea; its sides are fringed with forest; and the soil, where it is bare, glows warm with cinnabar.
...
And there was something satisfactory in the sight of that great mountain that enclosed us to the north: whether it stood, robed in sunshine, quaking to its topmost pinnacle with the heat and brightness of the day; or whether it set itself to weaving vapours, wisp after wisp growing, trembling, fleeting, and fading in the blue. ... She over-towered them [foothills] by two-thirds of her own stature. She excelled them by the boldness of her profile. Her great bald summit, clear of trees and pasture, a cairn of quartz and cinnabar, rejected kinship with the dark and shaggy wilderness of lesser hill-tops.

- (from the opening paragraph of The Silverado Squatters and the final paragraphs of Part I, Chapter 1)

I continued on the trail and hiked to the top of the north peak of Mt. Saint Helena, which provided spectacular views of Napa Valley and the surrounding area. The day had heated up quite a bit when I reached the top, so there is plenty of haze in this picture. 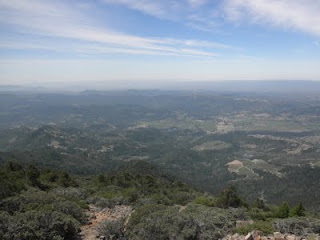 The change of view due to the heat is apparent when comparing the above picture and this one, taken 90 minutes earlier, from a couple of miles south and a thousand feet lower. 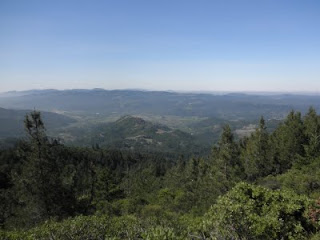 In The Silverado Squatters Stevenson describes a memorable scene of the valley covered by sea fog, the nearby lesser peaks looking like islands. It was, he said, "as though I had gone to bed the night before, safe in a nook of inland mountains, and had awakened in a bay upon the coast." For anyone that has seen such a roiling of fog in this area you can overlay that image on these peaks to the south. 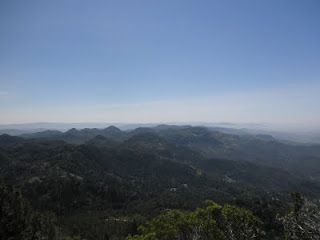 More details on the hike can be found here. If you're in the area and want a short outing, I recommend the hike to the memorial and mine area. For anyone deciding to do the full hike, feel free to contact me for additional information that will help.

After the hike, I headed to St. Helena for a look at the Robert Louis Stevenson Silverado Museum. While not large, the museum has plenty of information on Stevenson's life and family, not restriced to his stay in the area. Many thanks to Dorothy Mackay-Collins for providing a wonderful tour of the exhibits. Thanks are also due to Ian Wolcott of The New Psalmanazar for clueing me in to the existence of the museum. For more information on Stevenson's time in California, see this page.

Afterwards there were other sights to see. Rumor has it Napa Valley has more to offer than just hiking and museums. 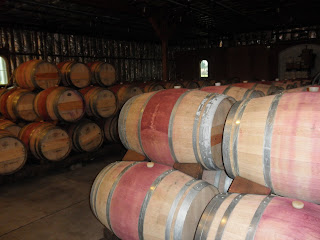 And perhaps the most curious feature of the whole matter is this: that we should have dwelt in this quiet corner of the mountains, with not a dozen neighbours, and yet struggled all the while, like desperate swimmers, in this sea of falsities and contradictions. Wherever a man is, there will be a lie.
- From The Silverado Squatters, after Stevenson helps in the jumping of a claim

Sounds like a nice day, and you even made it up Mt St Helena. Now that my kids are getting bigger I hope to get them up to the summit sometime. My parents live in Cloverdale so we drive up that way frequently.

It certainly felt longer than the 5 miles posted. If you haven't gone to the summit before, get an early start--the sun on the service road can be pretty draining since there isn't much shade. If they aren't able to make it the full way, there are several spurs to other summits, some that give better views toward the south.

Hi Dwight, sounds like a great day and thanks for posting pictures of the view from the mountain - I'm reading the Silverado Squatters now and it's great to see pictures of the places! Many thanks

David, my pleasure. Glad this helps!

By the way, I meant to mention the petrified forest is still nearby and, of course, looks like a huge tourist trap. Which of course means I'll need to check it out next time I'm up this way.

Thank you for your photos.

If you can locate your photos precisely on google map, that would be very good.