The Tree of Knowledge: the nose of a cockatoo and more years than the oldest of parrots 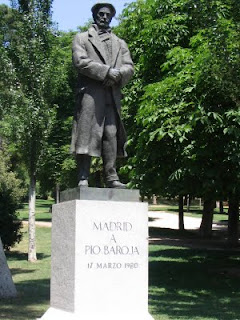 In looking at my sidebar on books I have reviewed, I see a disproportionate number by Pío Baroja and this post begins another book by him. Part of the reason has to do with limited information in English on Baroja and I have wanted to find out more about his work. Sins commonly attributed to his writing (see his Wikipedia entry for some examples—I’d add repetitiveness, in language and story lines) are present in his work but I have enjoyed them even so.

Although widely considered as his best work, I have been unable to find a copy of The Tree of Knowledge (El árbol de la ciencia) that I could afford. I finely took advantage of our little library’s interlibrary system with local colleges and universities and obtained a copy. So here we go with Part One ("The Life of a Student at Madrid"). All quotes are from The Tree of Knowledge by Pio Baroja, translated by Aubrey F. G. Bell (Alfred A. Knopf, 1928).

Part One follows the study of medicine by Andrés Hurtado in Madrid in the late 1880s and early 1890s. Baroja paints a bleak picture of Madrid, Spain, and the students of the time:

Madrid was living in a fictitious atmosphere formed by an old and unrenovated pragmatism.

The Madrid student, especially if he came from the provinces, arrived with the intention to copy Don Juan and amuse himself, to gamble and make love to women, in fact, as the professor of chemistry said with his usual solemnity, to burn himself out in an atmosphere too full of oxygen.

Except for a religious feeling which most of the students, careless about such matters, did not possess, the students at the end of the nineteenth century came to Madrid with the mentality of those of the seventeenth, and were determined to imitate Don Juan Tenorio to the best of their ability, in a life of

The cultured student, however much he might wish to see things as they were and acquire a clear idea of his country and the part it played in the world, was unable to do so. The influence of European culture in Spain was in fact confirmed to technical matters; the newspapers gave an imperfect idea of everything; and the general tendency was to induce the belief that what was great in Spain might be small outside it, and vice versa, in a kind of international bad faith.

If France and Germany never mentioned Spain of spoke of her only in jest, that was because they hated us; our great men, it was solemnly averred, Castelar, Cánovas, Echegaray, were the envy of other nations. The whole of Spain, and especially Madrid, lived in an atmosphere of absurd optimism, and whatever was Spanish was best.

This natural tendency to falsehood and illusion on the part of a country isolated by its poverty, contributed to the stagnation and fossilization of thought. (9-10)

Baroja savages all parts of Spanish society. The priests care nothing for religion. Politicians are vain, corrupt, and inactive. The students are insolent and the professors absurd. People believe that having money gives license for any behavior, excusing all sins.

In this setting we meet Andrés, the medical student who finds sickness sad and depressing. He shows little enthusiasm for medicine, wanting to become a doctor more out of practicality (money, society, etc.) than any desire to help people. Andrés is drawn more to literature and eventually philosophy, of which I’m sure we’ll see more of as the book moves along (let’s just say that Schopenhauer seems to be winning at this point). Interestingly, the only time life seems pleasant to Andrés revolves around the time spent telling his invalid friend about his doings and not in living the actual activities. Andrés wants to study life for something more than the mechanical nature of how things happen, wishing to find the source and, by implication, a meaning. Andrés finds himself admiring certain men in medicine and politics but becomes disillusioned with them as he experiences and learns more about life.

His tendency was toward a spiritual anarchism based on sympathy and pity, without any practical solution.

The fierce and revolutionary logic of such men as Saint Just no longer aroused his enthusiasm: it seemed to him artificial and unnatural. He considered that in life justice did not and could not exist. Life was a vague, tumultuous stream, and the actors in it played a comedy which they were unable to understand, while men who had reached an intellectual outlook contemplated the scene with pity and compassion.

These desultory ideas, this lack of plan and of a restraining purpose made Hurtado’s life very aimless and continually and uselessly agitated his mind. (64)

Baroja, originally trained in medicine, critically looks at the Spain of that time. The patients at the hospital for the poor are treated as something less than human. The dead, of course, are treated worse—corpses used for dissection are dragged through the halls of the university, skulls thumping on steps as they are taken to classrooms. Those practicing medicine don't escape his judgment. When Andrés’ younger brother contracts typhus, the family physician ignored all remedies, instead choosing to outwait the illness. Baroja adds anecdotes that I think have to be on purpose in order to question the meaning of life and how we interpret it. Maybe I'm reading too much into it, but the story of the human brain delivered to a professor's home for him to study but accidentally served as part of dinner seems to serve several purposes, not the least of which highlights the fragility of life—the brain comprehending this story could just as well served as a meal.

I don’t mean to imply this section is all doom and gloom. Baroja introduces many interesting characters and I’ll mention two. Antonio Lamela is described as an elderly, backward student. He takes several years to go through one year of study at the university. Lamela turns out to be a Quixote-like character, describing a love for “an aristocrat, a titled lady who drove about in a carriage and had a box at the opera.” (54) When Andrés actually sees the lady of Lamela’s heart, he is amazed to find “she was an ugly dark-complexioned spinster with the nose of a cockatoo and more years than the oldest of parrots. Apart from her unattractiveness, she took no notice of the Galician student and merely gave him a sour and unpleasant look of contempt.” (55) Brother Juan, described as a “strange mysterious character” (70), works at the general hospital, focusing on providing comfort to the contagious cases. His monk-like behavior, always available to those in need and giving away his money when he received it, stands apart from the crude self-centered behavior of most of the others in the hospital.

Email ThisBlogThis!Share to TwitterShare to FacebookShare to Pinterest
Labels: Pío Baroja, The Tree Of Knowledge