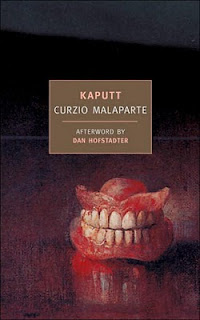 Kaputt proves to be a fictional memoir, or a fantasy intertwined with historical events, by Curzio Malaparte. Employed by an Italian newspaper during World War II, he was able to travel around Europe and to the Eastern Front, at ease with dignitaries, soldiers and peasants alike. A large part of the appeal of Kaputt (to me, anyway) lies with the uncertainty…the ambiguity…of and within many of the scenes. As Milan Kundera pointed out about the book, “It is strange, yes, but understandable: for this reportage is something other than reportage; it is a literary work whose aesthetic intention is so strong, so apparent, that the sensitive reader automatically excludes it from the context of accounts brought to bear by historians, journalists, political analysts, memoirists.” (italics in original) I have included quite a few lengthy quotes from Kaputt so anyone unfamiliar with the book can get a feel of Malaparte’s style and approach.

Malaparte is such an interesting character and World War II such an incredible event—why dress either one up beyond reality? Part of the answer lies in what Malaparte was trying to achieve, both personally and in his book. In “dressing up” history, Malaparte has shown what happened in a completely different light. It struck me at one point that, in some respects, Malaparte’s fictional memoir isn’t that different from the speeches in Thucydides’ work—they impart what happened even if not exactly word for word what was said, aiming for “what was nearest to the sum of the truth”. Then again, maybe not. The major difference lies with Thucydides laying out his methodology as attempting to recapture truthfully what happened. Malaparte never makes any such claim. The better analogy would be with Isaac Babel's Red Cavalry stories, both full of irony, ambiguity, and invention. Like Babel, what isn't being included feels just as important as what is detailed.

It is easy to critique Kaputt. His gothic fantasies go way over the top at times. His repetitions, hypnotic at times, can become tedious. He takes advantage of the fact that implausibility doesn’t really exist in such a surreal setting. Malaparte seems to be playing fast and loose with facts in order to delve into the truth. Does he succeed? It’s hard to tell since what he wrote for the newspaper at the time of the events and what ends up in Kaputt can be very different. Malaparte’s (the character) denunciation of Italy and Germany in Kaputt are firm, but how much of that comes from his conviction at the time of his writing the book of certain Axis defeat? I liked the comment in the Afterword by Dan Hofstadter that the book “challenges us to question its veracity much as a con man defies us to doubt his good faith.” Underlying his extended tropes of animals for facets or aspects of the war resides a metaphor that civilization in general, and Europe in particular, was committing suicide in the war.

The Flies
Update (29 Mar 2013): An interview with Walter Murch on translating Malaparte.