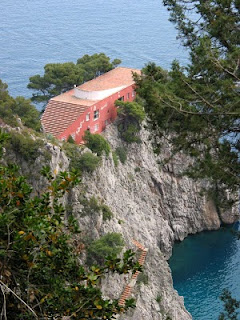 Casa Malaparte on the Isle of Capri
Picture source

For more on the villa, see A House Like Me

Kaputt reads as a World War II memoir by Curzio Malaparte, correspondent for the Italian publication Corriere della Sera. Connected to statesmen in many countries and assigned to cover the Eastern front during World War II, Malaparte moves through Nazi-occupied Europe and meets with personages across the political and social spectrum. Except…it isn’t a memoir. It’s a novel masquerading as a memoir, based in part on Malaparte’s experiences. How much of what he relates is true? How does what he is *not* telling us factor in? This tension, between what he does and does not tell, anchors the disconcerting nature of the novel.

And then there are “The Horses.” Kaputt’s six parts are titled “The Horses,” “The Mice,” “The Dogs,” “The Birds,” “The Reindeer,” and “The Flies.” While the animals make multiple appearances in their part, they also serve as symbols for the stories he tells within each part’s sections. Malamarte sometimes helps a little too much in explaining the symbolism:

“All that is noble, gentle and pure in Europe is dying. The horse is our homeland. You understand what I mean by this. One homeland, our ancient homeland is dying. And all those obsessing pictures, that persistent obsession of neighing, of the horrible and sad odor of the dead horses lying on their backs along the roads of the war, don’t they seem to correspond to the vision of war, to our voice, our odor, to the odor of dead Europe!”

Unfortunately the homeland was being replaced—at least symbolically. In addition to the dead bodies of people and horse lining the Russian roads, as described in War and Peace, were machines. “For miles and miles around there was only dead iron. Dead bodies of machines, hundreds upon hundreds of miserable steel carcasses. The stench of putrifying iron rose from the fields and the lagoons.” Malaparte’s flowing memories adds to the feeling that Europe was being replaced, too, as the miserable carcasses of everything he previously enjoyed lay strewn and rotting.

The events in Kaputt do not unfold in chronological order but rather across various moments of the war, linked by something cohesive (whether themes, atmosphere, people). Flashbacks occur within ruminations, but how factual are the reminiscent moments? Prince Eugene of Sweden and Malamarte discuss what Paris was like before the war, but the descriptions turn upon Proustian moments and events, becoming memories within someone else’s memory. The war has turned the present and the past into surreal incidents.

In the section titled “The Horses”, filled with casually bizarre moments, sad equine eyes stare back at the reader, none so doleful or terror-stricken as the horses of Lake Ladoga. Fleeing forest fires, many horses of the Soviet artillery reach the shore of the lake and plunge in the water.

The lake is not deep there, not more than six feet; but a hundred yards from the shore the bottom suddenly drops. Pressed within the narrow space (the lakeshore curves inward there forming a small bay) between the deeper water and the barrier of fire, the horses clustered, shuddering with cold and fear, their heads stretched out above the surface of the water. Those nearer to land were scorched by the flames and reared and struggled to hoist themselves onto the backs of the others, tried to push a way open by biting and kicking. And while still madly struggling, the ice gripped them.

The north wind swooped down during the night. (The north wind blows from the Murmansk Sea, like an angel of doom, crying aloud, and the land suddenly dies.) The cold became frightful. Suddenly, with the peculiar vibrating noise of breaking glass, the water froze. The heat balance was suddenly broken, and the sea, the lakes, the rivers froze. In such instances, even sea waves are gripped in mid-air and become rounded ice waves suspended in the void.

On the following day, when the first ranger patrols, their hair singed, their faces blackened by smoke, cautiously stepped over the warm ashes in the charred forest and reached the lakeshore, a horrible and amazing sight met their eyes. The lake looked like a vast sheet of white marble on which rested hundreds upon hundreds of horses’ heads. They appeared to have been chopped off cleanly with an ax. Only the heads stuck out of the crust of ice. And they were all facing the shore. The white flames of terror still burnt in their wide-open eyes. Close to the shore a tangle of wildly rearing horses rose from the prison of ice.

Such macabre moments happen frequently during the war and they become almost normal. Men come down to the lake during the winter and sit on the frozen heads, turning the horses’ plight into a ghoulish merry-go-round. German soldiers laugh at using their Russian counterparts, frozen with outstretched arms, as human signposts. These memorable scenes may be invented or embellished, but Malaparte’s blending of fact and fantasy sum up the perversity breaking over the world during the war.

Update (24 Mar 2014): See my post on some artwork related to the chapter on The Horses and some science behind the possibility of it happening.