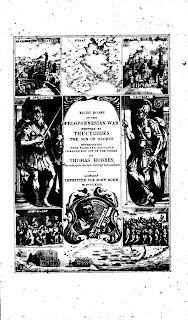 But Thucydides is one, who, though he never digress to read a lecture, moral or political, upon his own text, nor enter into men’s hearts further than the acts themselves evidently guide him: is yet accounted the most politic historiographer that ever writ. The reason whereof I take to be this. He filleth his narrations with that choice of matter, and ordereth them with that judgment, and with such perspicuity and efficacy expresseth himself, that, as Plutarch saith, he maketh his auditor a spectator. For he setteth his reader in the assemblies of the people and in the senate, at their debating; in the streets, at their seditions; and in the field, at their battles. So that look how much a man of understanding might have added to his experience, if he had then lived a beholder of their proceedings, and familiar with the men and business of the time: so much almost may he profit now, by attentive reading of the same here written. He may from the narrations draw out lessons to himself, and of himself be able to trace the drifts and counsels of the actors to their seat.

In “To the Readers” Thomas Hobbes explains his reasons for translating Thucydides. Hobbes’ affection for Thucydides is clear but that’s not the only reason he gives in taking on the work. Hobbes felt that a previous translation into English had been made from a faulty Latin translation, so that “by multiplication of error he became at length traduced, rather than translated into our language.” Hobbes makes use of a map of Sicily by Philip Cluveris and draws a map of Greece himself in order that “the history might be read with very much benefit by all men of good judgment and education, (for whom also it was intended from the beginning by Thucydides)”.

Hobbes follows his introduction with an essay “Of the Life and History of Thucydides”. He begins by summarizing ancient sources such as Cicero and Plutarch in tracing Thucydides’ family history to that of Miltiades, the Athenian general victorious at Marathon. Hobbes looks at Thucydides’ influences, Anaxagoras in philosophy and Antiphon in rhetoric as well as summarizing Thucydides’ religious belief. Hobbes believes that Thucydides is not superstitious (religious) but not an atheist. After running through the parts of Thucydides’ life, both known and speculated, Hobbes turns to his writings and the complaints raised by ancient writers about his history.

Along the way, Hobbes provides some insights that he took away from Thucydides:

“[F]or much prosperity (to which they had now for many years been accustomed) maketh men in love with themselves; and it is hard for any man to love that counsel which maketh him love himself the less. And it holdeth much more in a multitude, than in one man.”

“He overtasked not himself by undertaking an history of things done long before his time, and of which he was not able to inform himself.”

“Digressions for instruction’s cause, and other such open conveyances of precepts, (which is the philosopher’s part), he never useth; as having so clearly set before men’s eyes the ways and events of good and evil counsels, that the narration itself doth secretly instruct the reader, and more effectually than can possibly be done by precept.”

"Now let any man consider whether it be not more reasonable to say: That the principal and most necessary office of him that will write a history, is to take such an argument as is both within his power well to handle, and profitable to posterity that shall read it, which Thucydides, in the opinion of all men, hath done better than Herodotus: for Herodotus undertook to write of those things, of which it was impossible for him to know the truth; and which delight more the ear with fabulous narrations, than satisfy the mind with truth: but Thucydides writeth one war; which, how it was carried from the beginning to the end, he was able certainly to inform himself: and by propounding in his proeme the miseries that happened in the same, he sheweth that it was a great war, and worthy to be known; and not to be concealed from posterity, for the calamities that then fell upon the Grecians; but the rather to be truly delivered unto them, for that men profit more by looking on adverse events, than on prosperity: therefore by how much men’s miseries do better instruct, than their good success; by so much was Thucydides more happy in taking his argument, than Herodotus was wise in choosing his."

Awesome that you're reading this! I read Herodotus a couple years ago and was going to read this next but got sidetracked by ancient Greek drama.

Well, Greek drama (and Plato, and more) will be after this, but I have been wanting to read this for too long to postpone it even more. I need to remain more focused this year, and while I don't expect to "finish" the ancient Greeks this year, I need to make more progress.

But this does seem the natural follow-up to Herodotus, doesn't it?