The Peloponnesian War: an everlasting possession (Book I, Chapters 1-23) 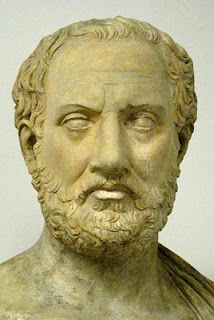 Thucydides, an Athenian, wrote the war of the Peloponnesians and the Athenians as they warred against each other, beginning to write as soon as the war was on foot; with expectation it should prove a great one, and most worthy the relation of all that had been before it: conjecturing so much, both from this, that they flourished on both sides in all manner of provision; and also because he saw the rest of Greece siding with the one or the other faction, some then presently and some intending so to do. For this was certainly the greatest commotion that ever happened amongst the Grecians, reaching also to part of the barbarians, and, as a man may say, to most nations. For the actions that preceded this, and those again that are yet more ancient, though the truth of them through length of time cannot by any means clearly be discovered; yet for any argument that, looking into times far past, I have yet light on to persuade me, I do not think they have been very great, either for matter of war or otherwise.

(Book I, Chapter 1—all quotes from the translation by Thomas Hobbes)

Thucydides begins his history with a bang—this is a man confident in himself and his story. The first twenty-three chapters (paragraphs) seem to form a type of introduction, making many claims while also laying out his methodology and some key concepts or themes. His terse style packs a lot of information into each sentence, so the following summary won’t be comprehensive but I hope it hits most of the high points.

Thucydides believes the truth from ancient times can be divined despite its murkiness. While evidence of previous conflicts may be out of reach due to the passing of time, Thucydides insists he critically evaluates everything while recognizing that man tends to blindly accept tradition. The clearest data will be relied upon instead of the verse of poets, who provide things more delightful “to the ear than conformably to the truth”. Thucydides mentions a fallacy in evaluating wars: “And though men always judge the present war wherein they live to be greatest, and when it is past, admire more those that were before it; yet if they consider of this war by the acts done in the same, it will manifest itself to be greater than any of those before mentioned.”

Thucydides realizes he may be accused of this fallacy so he lays out his methodology so he goes into detail on his use and source of speeches.

“What particular persons have spoken when they were about to enter into the war or when they were in it, were hard for me to remember exactly; whether they were speeches which I have heard myself, or have received at the second hand. But as any man seemed to me, that knew what was nearest to the sum of the truth of all that had been uttered, to speak most agreeably to the matter still in hand, so I have made it spoken here. But of the acts themselves done in the war, I thought not fit to write all that I heard from all authors, nor such as I myself did but think to be true; but only those whereat I was myself present, and those of which with all diligence I had made particular inquiry. And yet even of those things it was hard to know the certainty; because such as were present at every action, spake not all after the same manner; but as they were affected to the parts, or as they could remember.”

There is much to unpack here and it can lead to confusion—are speeches manufactured, based on what he thinks they should have said, or are they exact? Does the reader hear the speech of Thucydides or the speech of the historical figure? Obviously it’s too early to tell at this point, but it’s something to watch as the history unfolds. From what he says, there are some speeches he (or someone he trusted) was able to hear. Other addresses are constructed as he thinks they should have happened based on what he thinks was appropriate. In addition, he does not relay everything about the war that he has heard, limiting what he includes to things he saw or could confirm (excluding the speeches, as detailed). What should be interesting will be what he excludes as well as what he includes. I’m sure there will be much more to investigate and comment on with the speeches.

I'm currently taking a class on Classical Greece in which we are studying the Peloponnesian war. Your summaries have proven very helpful in the unraveling of some of the themes that Thucydides' presents. THANK YOU!

Trust me, they aren't comprehensive but I'm glad they help. Be sure and check out the posts at StratBlog (listed in the "Online Courses" on the right sidebar). They have had helpful discussions and posts as well. Thanks for the note!

I just started reading your summaries on "The History of the Peloponnesian War," and so far, they have proved very useful in clarifying some of the more confusing aspects of the text. Your list of themes is extremely beneficial - sometimes it can be hard to fish them out when your brain is focused more on the plot. So, thank you!

Well that's a first.
I hope the posts help!

Yes, they still help college students everywhere, even 8 years after your post was created.