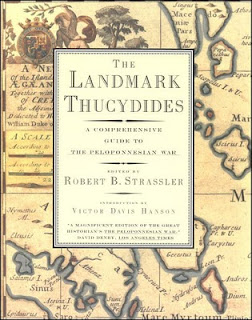 My resources posts intend to link to sites I think may be helpful in understanding a work as well as posts or sites I want to explore while reading the book. I never intend these posts to be comprehensive, and in approaching Thucydides I’m not going to pretend to cover more than a fraction of what is available online regarding his book. Keep in mind that many posts about Thucydides will tend to have political baggage added to them--I'm only interested in trying to understand Thucydides and his book, regardless of political leaning as long as posts or evaluations add something positive to that understanding. As always, if you know of sites or links you’ve found useful on a work, please let me know! With that in mind, here are a few links that I find may be helpful.

Text of The Peloponnesian War

Several versions of the text can be found online, usually translated by Richard Crawley. One locations is at Project Gutenberg.

For those predisposed to audio versions, Richard Crawley translation can be found at LibriVox.com

In the article I linked regarding The Landmark Herodotus, Paul Rahe mentions the previous release of The Landmark Thucydides. Despite praise for the Landmark series, Rahe notes some weaknesses in the Thucydides book, one being the translation used:

The second defect in The Landmark Thucydides is far more serious. Strassler is competent neither in Latin nor Greek, and he chose not to commission a new translation, which would have increased his costs considerably. Instead, on the advice of a number of classicists, he republished Richard Crawley's rendering, which had first appeared in 1874 and was in the public domain. With regard to the narrative, this was not a bad choice. Crawley's translation retains something of the force and power of the original Greek. With regard to the speeches and the handful of crucial digressions in which Thucydides hints at his own analysis of events, however, Crawley's rendering is grossly inadequate, for it is wildly inconsistent in its translation of the key terms that Thucydides and the Greeks of his time deployed to convey their evaluation of events, policies, and persons.

Despite this drawback and because of all the other benefits it offers, I plan on using The Landmark Thucydides but will supplement it with the online version translated by Thomas Hobbes. I’m not sure if this is going to work, but I’ll give it a try.

Aristophanes wrote several plays that deal directly or comment on the Peloponnesian War.

The Orations of Lysias compile many of the resident Athenian’s speeches, providing a flavor of life during the war.

Books 12 and 13 of Diodorus Siculus’ The Library of History cover the Peloponnesian War. Written in the first century B.C., he relies on Thucydides but also uses other sources (such as Ephorus) no longer extant. (Source: Bill Thayer’s Web Site)

Plutarch’s Lives of the Noble Grecians and Romans, written several centuries after the war, provides information from lost sources as well as framing them in a personable format. Figures included from the Peloponnesian War include Pericles, Alcibiades, Lysander, and Nicias.

Peloponnesian War history that continue Thucydides' book: Xenophon’s Hellenica (which I plan on reading around May) and the Hellenica oxyrhynchia.


Other books on Thucydides or the Peloponnesian War

There are dozens of books about Thucydides and the Peloponnesian war, but I’ll highlight one written about 100 years ago as well as reviews of some recent books.

Thucydides: The Reinvention of History by Donald Kagan looks at the agenda Thucydides might have had by looking at deviations from other sources. The review by Anthony Grafton begins well but goes horribly wrong when attempting to discern Kagan’s motives, not just with this book but with his (Kagan's) life.

E. Christian Kopff provides a review of A War Like No Other: How the Athenians and Spartans Fought the Peloponnesian War by Victor Davis Hanson. Hanson looks at themes from Thucydides and compares possible parallels in recent history and warfare. Don't expect Barry Strauss, working with Hanson on several projects, to be totally objective, but his review outlines Hanson's approach well.

Speaking of Hanson (and of Kagan), I remember sitting on the back porch during a California brown-out and beginning Donald Kagan's summary of the Peloponnesian War in the twilight and continuing under Coleman lantern. I was familiar with the concept of "the thin veneer of civilization" but reading about the atrocities during that war redefined what the phrase could mean.

In looking through links, I found this review of The Humanity of Thucydides by Clifford Orwin, a book new to me. From the review:

The "humanity" of Thucydides with which Orwin is concerned is not his humaneness, his empathy with human suffering, but his sense of the human predicament, his combination of "an unflinching presentation of the harshness of political life with an element that transcends this presentation" (p. 9). The greatest insight Thucydides can offer, it seems, comes in the speech of Diodotus: "a more terrible truth than that human beings are evil; namely, that they are not" (p. 203).

From Academic Earth’s video course Introduction to Ancient Greek History, Donald Kagan has four lectures specifically on the Peloponnesian War. (I’m listening to the first lecture while I compile this list—concise, complicated at times, but very enjoyable)

In these course notes, John Porter (University of Saskatchewan) provides an introduction to Thucydides and looks at his methodology compared to contemporary medical writers.

At Davidcharleslowe97′s Weblog, he looks at “the reliability and accuracy of Thucydides' account of the Peloponnesian War.”

The posts on Thucydides at A Reading Odyssey appear helpful, plus they include a Q&A session with Robert Strassler (editor of the Landmark series). Note: I just found this interview with Strassler shortly after the release of The Landmark Herodotus and added it to the Herodotus online resources.

Andreas Kluth of The Hannibal Blog looks at Thucydides’ presentation of the Melian dialogue.

The New Risks Weblog provides a link to a chapter from Theory of War and Strategy by R. Craig Nation (published by the U.S. Army War College). The chapter “Thucydides and Contemporary Strategy” looks at the relevance of the ancient work in contemporary strategic planning.

Thoughts on Thucydides at the New Centrist, focusing on Pericles and the politics of fear.

Update (15 Feb 2012): My series of posts on Leo Strauss' lectures on Thucydides, including links to the recorded lectures at the Leo Strauss Center.

Update (24 Jan 2011): While I haven't had a chance to listen to any of these videos, WorldNews has several videos regarding Thucydides and his work.

Update (17 Feb 2011): Reviews and links for any of the Landmark Series books can be found here.

Update (5 Dec 2011): An address to the NYU Medical School on The Athenian Plauge. Be sure to check out the Postscript for an update including recent research and its findings/problems.

Update (30 Dec 2012): Analysis of teeth from a girl that died from the plague--typhoid fever? Here's a reconstructed picture of the girl based on her facial bones.

Update (24 April 2013): The blog titled "He has a Wife You Know" provides a great map of the activity during the Peloponnesian War.

Update (14 May 2013): Here's the first chapter, titled "Grand Strategy: A Framework For Analysis," of Thucydides on Strategy by Athanassios G. Platias and Konstantinos Koliopoulos.

Abstract: Based heavily on the account of the Greek historian Thucydides, the paper outlines the events leading up to the outbreak of the 2nd Peloponnesian War in 435, and analyzes whether the outbreak of the war was inevitable, i.e. if the political conditions in Greece would have led to war no matter what the specific events were that, in the end, were the straw that broke the camel’s back.