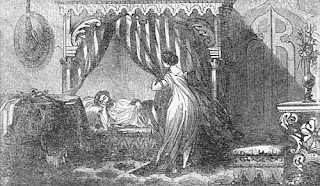 Never hath a painless life
Been cast on mortals by the power supreme
Of the All-disposer, Cronos’ son. But joy
And sorrow visit in perpetual round
All mortals, even as circleth still on high
The constellation of the Northern sky.

What lasteth in the world? Not starry night,
Nor wealth, nor tribulation; but is gone
All suddenly, while to another soul
The joy or the privation passeth on.

( The Trachinian Maidens by Sophocles, translated by Lewis Campbell, lines 127 – 136)

Book Three follows Cambyses’ invasion of Egypt and his resulting madness, the attempted coup by the Magi, and the ascension of Darius to the Persian throne. I am reading the The Landmark Herodotus so all quotes (translation by Andrea L. Purvis), and spellings come from that edition. I realize this post is rather long but there are many wonderful stories and characters to relay.

Herodotus said he visited the Pelusian battlefield where the battle between Persia and Egypt took place in 526 B.C. In comparing the skulls of those that had died, Herodotus notes that the Persian skulls are soft while the Egyptian skulls are very hard. In looking for explanations, Herodotus raises his theme of tje Persian “soft life”: “Exposure to sunshine, then, is the reason they [the Egyptians] have hard skulls, and the Persians conversely have soft skulls because they shade themselves from early childhood.” As I have mentioned in a previous post, Herodotus drops several of these hints but waits until the last paragraph to explicitly pull the “soft places yield soft people” theme together as one of the reasons for Persian failure against the Greeks.

After Egypt falls, Libya and other surrounding areas surrender to Cambyses without a fight. Cambyses plans additional campaigns to conquer even more areas and this is where Herodotus' theme on the importance of geographic borders (or “a river too far” as I find myself referring to it) exerts itself. Herodotus paints Cambyses as reckless and rash, sending his troops to Ethiopia without proper provisions. The resulting cannibalistic decimation unnerves Cambyses and he returns to Memphis. There he finds that the army he sent against the Ammonians is lost in the desert and never heard from again (the Ammonians say a sandstorm swallowed them). Upon returning to Memphis Cambyses sees people celebrating and he thinks they celebrate his defeat in Ethiopia. Upon finding out that the appearance of a new Apis cow, sacred to the Egyptians, is the reason for celebration, Cambyses stabs the cow. Unhinged before this event, he goes completely mad at this point according to Herodotus. (Egyptian records do not support the death of an Apis cow during Cambyses' time in Egypt).

Cambyses has a dream in which his brother Smerdis sits on the royal throne. Cambyses has his most trusted aide, Prexapes, return to Persia and murder his brother. Cambyses marries two of his sisters and then kills one over a perceived insult. Cambyses also kills Prexapes’ son in front of the aide, purportedly to prove he is not mad. Croesus admonishes Cambyses, who flies off the handle and tries to kill the elder aide. Cambyses’ servants shelter Croesus, knowing that the king would repent of his rashness at a later date. When Cambyses does regret his actions, the servants present Croesus, making the king happy. The servants are murdered, though, since they disobeyed the king. Cambyses begins to perform many sacrileges to the Egyptians as he descends into madness. Herodotus’ account of the mistreatments and madness are not supported by other sources, however, so these stories may be more of a reflection of Herodotus' Egyptian sources and their resentment toward the conquering Persian king. (See this article for more discussion on Cambyses’ rule in Egypt, including “The Egyptian evidence that we do have depicts a ruler anxious to avoid offending Egyptian susceptibilities”.)

At this point Herodotus begins a diversion on Polykrates, tyrant of Samos. Polykrates’ renown for his good fortune is known far and wide, causing the ruler of Egypt (Amasis, Psammenitos’ father) to warn him of too much success—he says the gods will become jealous. Polykrates takes Amasis’ advice and throws away something dear to him, a signet ring. When the ring is returned in the belly of a fish presented to the king, Amasis realizes Polykrates is doomed and breaks off contact. Polykrates begins to accumulate enemies but is able to withstand a Spartan siege of his city. Much later in this book Herodotus returns to Polykrates. Oriotes, the Persian governor of Sardis, preyed on Polykrates’ greed and captures him. Herodotus says that “Oroites killed him in a way too disgusting to relate and hung his body from a stake.” Amasis’ prediction had come true and we have an echo of Croesus’ fall and Solon’s warning that a man cannot be truly called fortunate until after he is dead. Also disturbing is Polykrates’ inability to change his fate even though he tries to do so.

Herodotus returns the story to Cambyses—while still in Egypt, he finds out that a rebellion is happening in Persia by someone claiming to be his brother Smerdis. Since he had ordered his aide Prexaspes to murder Smerdis, the king suspects treachery by his aide. But Perxaspes assures the king of his loyalty and suspects the Magus left to administer Cambyses’ household in his absence is behind the plot. The Magus has a brother named Smerdis (Gaumâta is the name on the Behistun Inscription). In his rush to return home, Cambyses accidentally stabs himself in his thigh, “in the very same spot he had earlier struck Apis”. Cambyses has two misinterpreted oracles come true, the first being someone (but not his brother) named Smerdis on the throne. The second oracle had predicted that Cambyses would die in the city of Ecbatana, which Cambyses interprets to mean in Persia. Unfortunately the town in Syria where he stabbed himself was also named Ecbatana and he dies soon after the accident. Cambyses utters a realization while on his deathbed that is echoed by others characters throughout The Histories: “It turns out that in the nature of things human, it is not possible to prevent what is destined.”

Before his death, Cambyses tells notable Persians what he had done to his brother. The Persians don’t believe Cambyses’ story, thinking he is simply trying to discredit his brother (and of course this entire story could have been a later invention of Darius in order to justify usurping the throne from the real Smerdis). Prexaspes finds himself in a bind—he doesn’t want to admit his part in the murder of the brother Smerdis, but he doesn’t want to contradict the king’s confession either. To make matters worse, the false Smerdis is generous to the Persians. The noble Otones figures out that Smerdis is not Cyrus’ son/Cambyses' brother (see below) and forms a group of seven conspirators. At Darius’ urging to act immediately, the conspirators go to the palace just as Prexaspes reveals the truth about his murder of the real Smerdis to a Persian crowd. The conspirators are able to kill the false Smerdis and his brother. The conspirators meet five days later for one of the most famous parts of The Histories, the constitutional debate—what form of government should they adopt. Although it is extremely unlikely this debate took place it is an interesting debate and an important storytelling device. Otones favors an Athenian-style democracy (isonomia, or equality under the law that was not developed for another 13 years), which he believes will offset arrogance and envy that naturally develop under a single ruler. Megabyzos agrees that they should avoid a single ruler, but believes that they should also avoid “the arrogance of the undisciplined common people.” The people, he argues, are ineffectual since they have no idea what they are doing. Instead, a group of the best men are most likely to make good decisions. Darius concurs about avoiding majority rule, but says an oligarchy will devolve into a monarchy so why not just cut to the chase and start with that? The majority of the conspirators agree, which seems ironic that a popular vote was used to decide to install a monarchy.

I commented on how the group would choose their leader and the trick Darius used in order to win in my post on The Behistun Inscription. After Darius becomes king of Persia, he establishes the organization and order which will facilitate Persian expansion and domination. He developed the satrap (province) system and Herodotus details the districts and their required tributes. Short diversions on India and Arabia follow, highlighting once again the strangeness (to the Greeks) that occurs the further you travel from their home. Darius’ conquests follow, starting with a spying expedition to Greece (which fails) and then the defeat of Samos. Babylon, taken by Cyrus in Book One, rebels and prepares for an extended siege. Darius was able to recapture Babylon only by the pretend desertion of Zopyros, who mutilates himself in order for the Babylonians to believe him. After a few staged victories (involving the slaughter of Darius’ worst troops), Zopyros gains the full trust of the Babylonians and is able to betray them for a Persian victory.