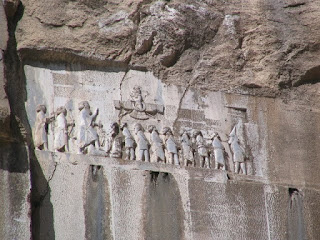 The inscription of Darius I, the Great on Mount Behistun
Picture source

In Antiquity, Bagastâna, which means 'place where the gods dwell', was the name of a village and a remarkable, isolated rock along the road that connected the capitals of Babylonia and Media, Babylon and Ecbatana (modern Hamadan). Many travellers passed along this place, so it was the logical place for the Persian king Darius I the Great (522-486) to proclaim his military victories.

The famous Behistun inscription was engraved on a cliff about 100 meters off the ground. Darius tells us how the supreme god Ahuramazda choose him to dethrone an usurper named Gaumâta, how he set out to quell several revolts, and how he defeated his foreign enemies.

The large relief and text (in three languages—Persian, Babylonian, and Elamite) confirms part of Herodotus' story of Darius' ascension to the Persian throne in Book Three of The Histories.

Not included in the inscription are the events after the cabal of seven Persians overthrew the usurper Gaumâta. Herodotus details the constitutional discussion (more than likely invented—I’ll include more on that in the Book Three discussion) and the alleged trick Darius used to assume the throne. A summary of Book Three's paragraphs 84 through 86: six of the seven Persians agree that at sunrise they will meet outside the city and the owner of the horse that makes the first sound will be king. Darius asked his groom, Oibares, to do what he could to insure his horse would be the first to make a sound. That night, Oibares takes Darius’ horse to the spot the men will meet the next day and a mare is provided for the stallion to mate. The next morning, as Darius approaches that same spot, his horse gallops up to it and whinnies. Even though Darius had accomplished this with a trick, lightning appeared and thunder clapped , apparently a sign of agreement of his ascension from the gods. (An alternate version has Oibares coating his arm with a mare’s secretions and then passing it under the stallion’s nose when they reach the spot.)

Far from hiding his stratagem,

The first thing he did was to set up a stone and have a relief carved on it in which was depicted a man on horseback with an inscription which said, Darius son of Hystapes acquired possesion of the kingship of the Persians by the merit of his horse [and here he placed the name of the horse] and of his groom Oibares." (from paragraph 88)

Back to the Behistun Inscription...more can be found at Livius.org or at Wikipedia, including other historical monuments at the site. The misinterpretations of the engravings are humorous as well, whether assuming it represents the ten tribes of Israel or Christ and the disciples.