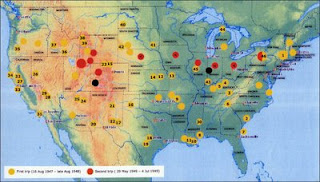 Part Two was somewhat of a disappointment to me, which I’ll try to explain as I go along. The wordplay and parodies continue, but some contradictions (or at it seems to me) ultimately undermine the book.

The seductive language continues, lulling the reader into a friendly mindset toward Humbert (HH) until reminded of his “unspeakable acts”. In mentioning Lolita’s “morning duty” and his dream of Lo fathering a girl with him to have a nymphet granddaughter (while he is still virile), HH’s revelries remind the reader of his true nature. The only time he mentions shame comes in relation to other actions, such as threatening Lolita with reform school in order to control her. The “horrible hopelessness” of his unrequited love makes the reader realize that this torture was really ecstasy to him. As shown by Lo’s sobs after sex (while HH feels giddy), his pleasure destroys her. The “horrible hopelessness” more accurately describes Lolita’s situation. At the heart of HH’s desire lies a fundamental contradiction. He faults Lolita for being the kid she is, yet the only reason she physically appeals to him is her age. Everything else about her, being easily swayed by advertising for example, irritates him. And yet the irritants endear her to him.

Some reviews of the book, particularly shortly after its release, focused on a supposed anti-American theme. The text doesn’t support that at all. There are too many tributes and lyrical descriptions of a “lovely, trustful, dreamy” country. It is true that HH looks down on much that he describes during his cross-country trips, but he looks down on most everything that isn’t highbrow art (or a nymphet). His reaction to Maximovich’s European literary suggestions is similar to snide tone he takes with the advertisements he reads. Keep in mind, though, that this is a man that can’t imagine a hotel for anything other than “illicit love”. His world lies well beyond Alice’s looking glass (and the frequent use of mirrors in the text can’t be an accident) while his descriptions and opinions evoke the Alice in Wonderland-like world he inhabits. Both his tributes and his criticisms have to be taken with more than a grain of salt.

Many discussions quote the following sublime passage as evidence of HH transcending his solipsism as well as arriving at a true love. HH is high on a hill (initially calling to mind his previous high-altitude tryst and almost getting caught) overlooking a mining town:

“What I heard was but the melody of children at play, nothing but that, and so limpid was the air that within this vapor of blended voices, majestic and minute, remote and magically near, frank and divinely enigmatic—one could hear now and then, as if released, an almost articulate spurt of vivid laughter, or the crack of a bat, or the clatter of a toy wagon, but it was all really too far for the eye to distinguish any movement in the lightly etched streets. I stood listening to that musical vibration from my lofty slope, to those flashes of separate cries with a kind of demure murmur for background, and then I knew that the hopelessly poignant thing was not Lolita’s absence from my side, but the absence of her voice from that concord.”

If the book had ended there the reader might believe that HH had saved his soul (his revised objective in writing) and arrived at some level of insight for something beyond himself. But everything is undermined by the final paragraph:

“And do not pity C.Q. One had to choose between him and H. H., and one wanted H. H. to exist at least a couple of months longer, so as to have him make you live in the minds of later generations. I am thinking of aurochs and angels, the secret of durable pigments, prophetic sonnets, the refuge of art. And this is the only immortality you and I may share, my Lolita.”

About this final section, Nabokov said “I did want, however, to convey a constriction of the narrator’s sick heart, a warning spasm causing him to abridge names and hasten to conclude his tale before it was too late. I am glad I managed to achieve this remoteness of tone at the end.” (from the notes of The Annotated Lolita) Far from remoteness, it feels like an intrusion by Nabokov. While both Quilty and HH are so repulsive that you don’t mind seeing both of them receiving a death sentence, the nature of the crimes committed in the story insure the characters would live on regardless of HH living a few months longer or not (in order to write the tale). The only reason to have HH live and not Quilty is to tell the story in this manner. There has been no transcendence. Trilling’s claim of a love story is undermined again—ultimately the story ends up being about what HH wants. There are some other instances of Nabokov inserting himself, which, while not a terminal flaw does undermine some of the other achievements of the book. Sometimes it does add humor, like HH mulling over what has transpired: “(i)f somebody wrote up her [Lolita’s] life nobody would ever believe it.”

An underlying theme in Lolita is HH’s (and Nabokov’s) distaste for modern psychiatry, the “psychoanalytic racket” in particular. The ultimate irony of the book is that Part Two is a perfect allegory of Freud’s Beyond the Pleasure Principle. Eros and Thanatos play against each other within Humbert, the death instinct escalating as his double (Quilty) becomes more involved in his life. Initially each player seems to generally represent an individual drive, but the drives increasingly mingle in each character as they interact (known or unknown) with each other. Humbert’s murder of Quilty also kills the last purpose HH had in life (until writing the book gives him a new one). The characters, if you see the section as an allegory, are so intertwined that the murder becomes a form of suicide.

Next I plan to find some time for Stanley Kubrick’s 1962 film version.