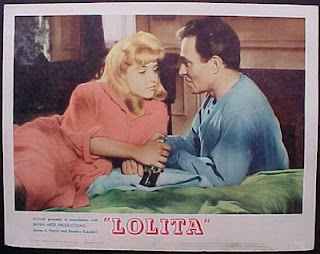 Unfortunately I had to watch the movie in fits and starts over several days, but hopefully I won’t bungle any of the facts of the movie. There is a good overview and recap of the film at American Movie Classic’s filmsite.org.

Two Views of Lolita, both of which are higher on it than I am, are at The Kubrick Site. Both views include good points on moments or props that may be too subtle to catch when they happen. Also provided is a summary of Nabokov’s involvement with the movie.

Not expecting the movie to be entirely faithful to the book meant that I wasn’t disappointed when things strayed from the text. The structure is completely different. At the beginning of the book you know that Humbert has murdered someone but the victim is not identified until near the end. The film starts with the murder, which actually works well for movies—the remainder is a set-up for the viewer to unravel. The ping-pong game between Quilty and Humbert can be seen as symbolic of their struggle for Lolita, and there are other nice additions that work well such as Humbert shooting Quilty through a painting of a young girl (hinting at the abuse to follow).

Some other additions work well. Charlotte and Humbert playing chess is a great addition, with special emphasis on how the knight moves particularly appropriate. I liked the scene of Humbert between Charlotte and Lolita at the drive-in (viewing a Frankenstein movie was a nice touch) vying for Humbert’s attention. Humbert thinks of using his gun on Charlotte, which works as a nice revision to his plan to drown her. Humbert painting Lo’s toenails adds a nice touch since Kubrick was restricted by how much interaction he could show.

However there were some changes that I couldn’t understand the reasoning. One of the best parts of the book is the uncertain gender of Quilty to Humbert—the movie has Charlotte specifically talk about Clare as “he”. Other additions are head-scratchers to me as well. Why introduce Charlotte’s nephritis (by John and Jean Farlow)? Maybe to provide an excuse for her fake sickness, but it does nothing. The intimation that Quilty had been intimate with Charlotte years ago replaces the hints that Humbert dropped in the book that Charlotte and he had been lovers—the latter provides a great cover for Humbert, both sympathetically and practically. Some visual touches work well, like Quilty reading the comics section of a newspaper so that Humbert won’t see him, evoking many touches within the book.

All these and other divergences or changes I could have overlooked but for two things. In the book, Humbert plans, schemes, and dreams of seducing Lolita. So much groundwork and preparation is detailed, like the sleeping pills. Those incidences provide tension and comedy in the book but they seem to be totally missing in the movie. Everything that happens after Charlotte’s death should be magnified because of what went on before. The second item that annoyed me to no end was the music. I found myself turning down the volume often so I didn’t have to listen to it.

James Mason is solid as Humbert. Not quite the “movie star good looks” I envisioned, but who knows if the book’s Humbert was truthful. Many of Mason’s mannerisms reflected inner turmoil and distraction: I loved his “I – yi – yi – yi” stammer. Sue Lyon was solid as Lolita. Obviously older than the character in the book and so a little less innocent looking, but the suggestive way she drinks a coke through a straw or eats potato chips out of the bag are very erotic. The eroticism of Lolita was minimal, though, which is appropriate—the sensual torture of Humbert when around her was mostly in his head. The sexual innuendos and tension are also shown in other ways, such as the feeling that John and Jean Farlow are swingers (or whatever the appropriate term is…or maybe I was reading too much into it). Shelley Winters is great as Charlotte. She got on my nerves quickly, even with minor things, and she reeked of desperation. Unlike the music, the annoyance was part and parcel of the character.

Peter Sellers as Quilty eludes what I expected. I hated the manner he employed when talking to Humbert, either on the porch of The Enchanted Hunters inn or over the phone just before Lolita escapes. The wonderful dialogue in the book at the inn would have lent itself beautifully to the film, leaving the viewer to wonder “what did he really say”. Instead you get nervous, irritating patter. The scene with Quilty playing the school psychologist seemed unnecessary with all the other times he was around Lolita, even though it was consistent with trying to relax Humbert’s grip on her. The bad German accent in addition to the patter simply irritated me (which is probably the point). During the movie, even though Sellers plays the role well, I kept asking myself “Is he Quilty?” Again, I don’t mind divergence from the source if it adds something, but this change seemed to actually diminish Quilty.

The revelation to Humbert that Lolita had left with Quilty is a moving scene, but not enough to hang the end of the movie. I think it would have been more effective to start the movie with the three-year interlude, having Humbert voiceover (looking for his love and the man that wronged him) while looking for Lolita. Then you have somewhere to go after the revelation other than a fadeout. But that’s not the movie or ending we get. This is a film that falls between the criticism and praise it has received, yet I still have a feeling of disappointment given the names involved. Given the source, even though I was somewhat dissatisfied with the book, I don’t think the film took enough advantage with the wealth of material available.

Picture source at FilmPosters.com
Posted by Dwight at 2:55 PM