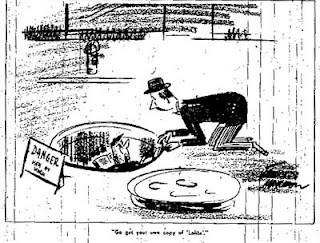 This cartoon originally appeared in The New York Times Book Review on September 14, 1958.
The caption reads, "Go get your own copy of 'Lolita.'"
Picture source

The book developed slowly, with many interruptions and asides. It had taken me some forty years to invent Russia and Western Europe, and now I was faced by the task of inventing America. The obtaining of such local ingredients as would allow me to inject a modicum of average “reality” (one of the few words which mean nothing without quotes) into the brew of individual fancy, proved at fifty a much more difficult process than it had been in the Europe of my youth when receptiveness and retention were at their automatic best. Other books intervened. Once or twice I was on the point of burning the unfinished draft and had carried my Juanita Dark as far as the shadow of the leaning incinerator on the innocent lawn, which I was stopped by the thought that the ghost of the destroyed book would haunt my files for the rest of my life.
From “On a Book Entitled Lolita”—Nabokov wrote this to be included with excerpts of the book appearing in the 1957 edition of The Anchor Review and it is now usually included as an Afterword to the book.

I liked the above quote for several reasons, including for the idea that Nabokov thought his books invented (reflected and defined? Or something more?) locales, as well as the prospect of a ghost haunting him. Fear of ghosts plays a role in Lolita, particularly Humbert Humbert’s recently deceased wife Charlotte. A major focus of the book is on death. It starts in Dr. Ray’s forward and continues throughout the book. Usually the deaths are merely relayed to the reader and not depicted, Charlotte’s accident a notable (near-)exception. The ghosts and deaths can be literal or figurative, sometimes intertwined when HH notes (shortly after his night with Lolita in The Enchanted Hunters) that he felt “an oppressive hideous constraint as if I were sitting with the small ghost of somebody I had just killed.” He had, of course, destroyed Lo’s… “innocence” isn’t the right word, even though I see that used regularly. She was already sexually experienced, as HH takes great pains to note, but it was as an adolescent, exploring “grown-up” things. HH destroys what remains of Lo’s childhood while making her completely dependent on him. He compounds the callous treatment with his brutal way of revealing her mother’s death. Of course she had “absolutely nowhere else to go.” Any ethical doubts and fears he experiences appear too little and too late.

Nabokov provides a fascinating study of Humbert’s psychology. HH’s approach in writing the manuscript as an appeal to an imaginative jury will necessarily slant things in his favor. Several times HH swears he is telling the complete truth, yet in his narrative he makes it clear that facts are not important in certain situations (in this section, even simple things like society columns and previous lovers). The seduction of the reader is never quite consummated since Humbert continues to drop discordant rationalizations. Asking “the community to allow them [pedophiles] to pursue their practically harmless, so-called aberrant behavior, their little hot wet private acts of sexual deviation without the police and society cracking down upon them” is a sure way not to sway the jury. His appeal for the reader to “Imagine me; I shall not exist if you do not imagine me”, while true of all fictional characters, is his appeal to get inside his head—understand what he is feeling and hopefully sympathize with his plight. HH asks for this because, as he notes, “I have only words to play with!” The inadequacy of words is explored as HH visits the accident scene where his wife was killed—the flash of impression, then sense is made (but still impaired) in ordering words to attempt to describe events. If HH can get the reader/jury to become enamored or sexually aroused in his descriptions, he will win their compassion and acceptance.

Not to pick on him, but it makes me wonder if I’m reading the same book as Lionel Trilling:

(W)e find ourselves the more shocked when we realize that, in the course of reading the novel, we have come virtually to condone the violation it presents. …(W)e have been seduced into conniving in the violation, because we have permitted our fantasies to accept what we know to be revolting.

Ummmm, no. Nabokov never pulls the veil completely up to obscure the action underneath Humbert’s passionate appeal. Despite the excuses and rationalizations, the dysfunction in HH’s mind comes to the foreground time and again in dealing with this “deamon disguised as a female child.” If there is love, it is a stilted, dysfunctional emotion that HH believes is love. He declares his feelings for Lo are more than just physical, yet all he can think about during their drive the morning after The Enchanted Hunters is having sex with her again. HH constantly buys her things, the only way he can show affection toward her outside of sex. There are moments that lead you to believe HH might actually have true feelings for Lolita: his obsession with her ‘purity’ for example—he was relieved to see she still had her appendix, therefore not scarred. And yet his “feelings” are not diminished when he finds out about her camp experience. That budding promise of depth to his feelings (beyond sex) is quickly dashed with his cruelty toward her.

All of which is not to say reading the book isn’t enjoyable. The nature of the narration, abounding in puzzles and displaced hints, invites a second reading (or more) to catch the meaning and depth of the writing. Once again, I’ll recommend this book needs to be heard (read it aloud if an audiobook isn’t available). But I keep coming back to the question I had in the previous post on the book: does it rise above being a parody? Do I want to read it again for something more than just solving the puzzles? Part One was a promising start.