To the Lighthouse discussion: The Window, Chapters 10 – 16 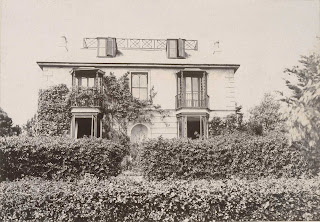 This section covers up to the dinner party and allows the reader to meet more of the Rasmay family and guests.

Mrs. Ramsay expresses her desire to spare her children from what she views as the hostility of life. She thinks they will never be happier than they are right now, while at the same time recognizing they all go through stages. The unasked question is when do people stop going through stages? Woolf shows the volatility of the characters’ nature and feelings, regardless of their age. Mrs. Ramsay recognizes that little things make the children inordinately happy, but doesn’t apply that to adults or note that little things also make young and old inordinately unhappy. She views life as “terrible, hostile, and quick to pounce on you if you gave it a chance,” yet I don’t think it a mistake that she only asks for the children to remain the same and not herself. Only by making time stand still or standing outside of time does she seem to say that happiness can be achieved. She wishes this for her children, particularly the youngest ones, even though she and her husband feel that the children will be “better” than the parents in certain ways, which will “stem the flood a bit.” One later quote that "one's children so often gave one's own perceptions a little thrust forward" may also provide an additional impetus to Mrs. Ramsay's wish.

…(I)t was a relief when they [the children] went to bed. For now she need not think about anybody. She could be herself, by herself. And that was what now she often felt the need of—to think; well, not even to think. To be silent; to be alone. All the being and the doing, expansive, glittering, vocal, evaporated; and one shrunk, with a sense of solemnity, to being oneself, a wedge-shaped core of darkness, something invisible to others. … When Life sank down for a moment, the range of experience seemed limitless. … Not as oneself did one find rest ever, in her experience…but as a wedge of darkness. Losing personality, one lost the fret, the hurry, the stir; and there rose to her lips always some exclamation of triumph over life when things came together in this peace, this rest, this eternity… .

So we have two contradictory ways to triumph over time: “being oneself” by oneself, and the community of family and others (as shown in the upcoming dinner party). In the sense of community you only see bits and pieces of others (“Beneath it is all dark, it is all spreading, it is unfathomably deep; but now and again we rise to the surface”), but that is all we have to work with in dealing with others. Woolf demonstrates this complexity while also showing the silent communication between Ramsay husband and wife, able to generate an entire conversation with only a glance. The quiet conversation between Mr. and Mrs. Ramsay as daylight faded shows a remarkably tender side of their relationship, even when they feel they can’t speak. Because of her concern of the evanescent nature of life and happiness, Mrs. Ramsay makes such quiet moments rich and satisfying…transcendent because of her concerns.

We may only touch at the rough boundaries of others, but Mrs. Ramsay shows how much influence one can have on others, whether real or imaginary. She inspires soaring internal rhapsodies from Charles Tansley and William Bankes. Paul and Minta get engaged from the feeling that Mrs. Ramsay has somehow “made” them do it. Mr. Ramsay may have achieved his greatest work before he got married, but he is able to have a long graceful decline thanks to his wife’s nourishment. Even the family’s fight for Mrs. Ramsay’s attention demonstrates her value to them.

I noted the contrasts between characters and items in the previous post, but the similarity between such pairings increases as this section progresses. Lily and Mrs. Ramsay approach the roles of a woman in society from opposite ends of the spectrum, yet many of their thoughts mirror each other even if they lead in different directions. Mrs. Ramsay regrets not having traveled and seen more, as well as not seeing the societal improvements she would like to see. She knows she will not be able to accomplish either until the children are grown, making the regret palatable. Lily reflects on not seeing more artwork and comes to the conclusion that she would never be content with her own paintings if she were exposed to more. Mr. Ramsay is called to mind in comparing this discontent of Lily. She is unhappy with her work, unable to successfully translate what she sees to the canvas. Mr. Ramsay worries about the ability of his work to last and peremptorily makes it even harder to create something that is meaningful. In contrast, however, Lily is trying to create based on what she sees and feels while Mr. Ramsay is working through a logical progression of thought that is apparently meant to be universal (what his work actually is trying to be accomplish is deliberately vague). The complex relationships between Lily and the Ramsays simultaneously calls into question roles while not judging what is satisfying beyond works for the individual. Just as Minta’s (lost) brooch bridges across time and connects her to her grandmother, Lily is a bridge between the elder Ramsays. She has much in common with the couple, even though she is completely her own person. The emphasis is highlighted between Mrs. Ramsay and Lily, each using the other to define what they believe their role to be. I mentioned earlier that it would be interesting to see how characters define themselves, especially how they do so in comparison to others. This dynamic is most prominent with the two women and you realize it has an impact in how they treat those around them. 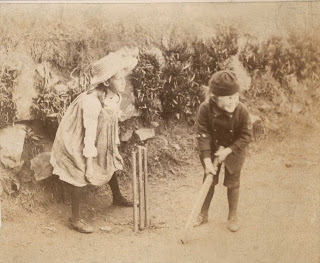 Picture of Virginia Woolf and her younger brother Adrian (from the same source as the picture at the top), c. 1886
Posted by Dwight at 2:19 PM