To the Lighthouse discussion: The Window, Chapters 2 – 9 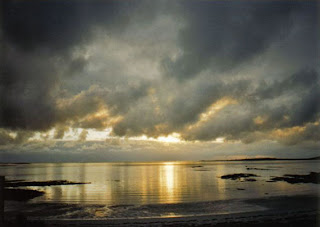 “…she felt…how life, from being made up of little separate incidents which one lived one by one, became curled and whole like a wave which bore one up and threw one down with it, there, with a dash on the beach.”
Picture--Hebridean Sunset

While there are many things going on in this section, the use of contrasts stands out. While people or things are played off each other (or even itself), many times there is an undercurrent showing their similarity. A few that I noticed (definitely not a comprehensive list) are noted below:

In many of the relationships mentioned above, there is a distance between the characters that cannot be bridged. Lily questions “How did one judge people, think of them?” Later she asks herself how “did one know one thing or another thing about people, sealed as they were?” Woolf makes us aware that each person has overflowing thoughts of which we barely or rarely are invited in to see. While that isn't an earth-shattering revelation, the approach is heightened by the ever-changing feelings we are allowed to see. The ‘self’ is a complex thing, changing rapidly and sometimes dramatically. These changes aren't always apparent to others. While we are allowed a view inside, all the other characters get are impressions (often contradictory) to guide them in understanding others.

In addition to the difficulty of comprehending others, Lily’s painting exhibits the difficulty of capturing what we see and translating it into art. She differentiates between what is physically there versus her sensual view of it, stressing repeatedly “This is what I see.” Lily tries to call up the “vision which she had seen clearly once” but has trouble capturing on canvas. The translation from sensing a scene to representing what she saw shows the struggle to create and interpret. Mrs. Ramsay and Charles Tansley denigrate her efforts, but she perseveres in the attempt to faithfully capture what she experienced. In contrast to Lily is Mr. Ramsay, who is unable to convey “This is what I like—this is what I am” (echoing Lily’s “This is what I see) in regards to his work. He tears down all art in response to his inability to reach a higher point in his thought. Mr. Ramsay questions the utility of art in improving civilization, as well doubting its lasting nature. That he will be teaching the works and events of a century or more before the present time to his students is lost on him. As is the example of why his students come to him or why Lily Briscoe attempts to paint—self-expression and personal achievement. Personal improvement outside of lasting acknowledgment means little to him as he attempts to avoid his own oblivion through his work.

There is one moment in this section where tranquility occurs and that is when Mr. Bankes views Mrs. Ramsay. His rapture causes him to step outside of time for a brief moment, and the tranquility and happiness is on display for Lily to see.