To the Lighthouse discussion: The Window, Chapters 17 – 19 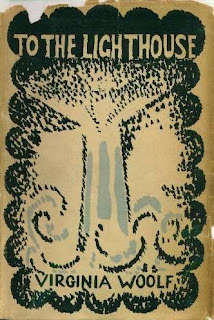 Cover of To the Lighthouse by Vanessa Bell
Source

The last three chapters of “The Window” section takes place during the dinner and later that evening. I will briefly look at the dinner and some topics covered then and afterwards.

The dinner starts off with weariness and dissatisfaction of many of the participants. Several characters wish they weren’t there, feel something is lacking and that they have nothing to say. The turning point is when the candles are lit—while the narration didn’t note it, you realize the twilight made the room dark and uninviting. The diners feel physically closer together as “uneasiness changed to expectation…anything can happen." The food, the fruit and then the main course, cement the positive change in atmosphere. “(F)or the night was now shut off by panes of glass, which, far from giving any accurate view of the outside world, rippled it so strangely that here, inside the room, seemed to be order and dry land; there, outside, a reflection in which things waved and vanished, waterily.” (my emphasis) The outside represents the passage of time, the fleeting nature of life. “Some change at once went through them all, as if this had really happened, and they were all conscious of making a party together in a hollow, on an island; had their common cause against that fluidity out there.” The sense of community they achieved represents one stay against that danger. The difficulty in drawing everyone together was simply one of inertia—the distance we ordinarily feel makes it hard to overcome, but once overcome it continues to have a life of its own. The glimpses into the consciousness of the characters reveals the difficulty in connecting with others, yet the self can change and adapt to make things more inviting.

During the meal, the language used invokes a religious overtone that the participants feel. The language starts with references to pagan rituals but gradually adopts Catholic overtones. The poetry, quoted and then chanted, helps seal the religious feel with its rhythm, tone, and subject.

At the start of the dinner, the thoughts of several characters are less than generous. Mrs. Ramsay pities William Bankes for no longer having a wife and not having any children. Yet he is happy to be alone, feeling there is a sacrifice that has to be made in order to be around other people. Mr. Bankes looks at Mrs. Ramsay as one of his oldest friends but has nothing to say to her, feeling that there was a great distance between the two. Charles Tansley derided the silliness of the host family, mostly regarding the women. However it is the women who draw him into the group, including him in order to be social (and as Lily put it, at great cost). It is their “silliness” that helps make the evening a success. There was much communication between characters without words being spoken: between Mr. and Mrs. Ramsay, Mrs. Ramsay and Lily, Paul and Minta with everyone else (as they radiated their love), showing that the connection can be made at several levels.

Lily looks at Mrs. Ramsay and contrasts “that abundance with her own poverty of spirit”. Mrs. Ramsay is able to ‘control’ others and make things better by being so social. Lily reflects on the assumed engagement of Paul and Minta: “For any rate…she [Lily]need not marry, thank Heaven; she need not undergo that degradation. She was saved from that dilution.” She feels conflicted between what she feels and what she sees others feel, which parallels her frustration in not capturing a scene appropriately in her painting. Her questioning of marriage is echoed by Mrs. Ramsay at the end of “The Window” section: “(W)hy is it then that one wants people to marry? What was the value, the meaning of things?” While there is no answer given, part of it appears to be that two people can create what just one person cannot.

The creation theme carries over into Mr. Ramsay’s concern that his work will not last. The irony is that he constantly quotes, reads, or alludes to other works. A particular example is his reactions in reading Scott after recently saying “the arts are merely a decoration imposed on the top of human life; they do not express it.” Scott “made him fell so vigorous, so relieved of something that he felt roused and triumphant and could not choke back his tears.” He “forgot his own bothers and failures completely.” The arts are hardly a mere decoration for him. Mr. Ramsay feels some works will last for him and he realizes that his books will last for some people but not for others. At least for this evening, that is acceptable to him. One other example of what art can do as seen by Mrs. Ramsay after the poem was recited: “(T)he words seemed to be spoken by her own voice, outside her self, saying quite easily and naturally what had been in her mind the whole evening while she said different things…”. The collective recitation by the people at the table was “their own voice speaking.” Art doesn’t just speak to us, it can speak for us.

The passage of time weighs heavy in this section. Mrs. Ramsay reflects on a stay with Carrie Manning twenty years ago, how “there was no future to worry about.” She remembers it while current events keep slipping into "the past," making the present have an ephemeral feel. Mrs. Ramsay knows about her changes in the twenty years since elapsed, but feels “she did not know this Carrie who built a new billiard room.” It is the same person, of course, but one that she lost touch with over the years and is not consistent with her memory of that special weekend. How many people at the current dinner will look back in twenty years? She feels Paul and Minta will always come back to this evening, yet she realizes she has probably only thought of the weekend with the Mannings once since it happened. As highlighted with all the old friends, people drift apart and do not always look on them the same even if they stay in touch. What is passed between generations is compared as well. The undercurrent of comparing the brooch that Minta’s grandmother left her versus the recipe that Mrs. Ramsay’s grandmother gave her pivots on what they mean outside the person who receives it. Both gifts are highly valued, but only one can be effectively shared with others.

Unfortunately the symbolism of the boar’s head felt heavy-handed, the specter of death that Mrs. Ramsay protects her children from with the use of her own shawl. The role of motherhood is emphasized as is the cost of its performance. Much more in tune with the rest of this section was when she “pulled the window down another inch or two, and heard the wind, and got a breath of the perfectly indifferent chill night air and murmured good night…”. Shortly after that, Mrs. Ramsay was acting like a child when talking with Prue, Paul and Minta about their proposal to watch the waves on the beach. The swings in time and thought parallel her feelings of jealousy when looking at Paul and Minta—they have their whole lives together to experience, while much of hers is behind her. Yet her importance to the family and the party is continually emphasized, especially with the description of the party disintegrating once she left. Earlier she had described her own contributions as negligible, but we constantly see that isn’t so. “But what have I done with my life?” she asks at the beginning of this section. What she gives to her children is made clear over and over again. She is able to give her husband what he needs, sometimes directly and other times indirectly. She wishes that it wasn’t necessary, yet it seems to make her happy when she nurtures him. She feels frustration at times since “It was only that she never could say what she felt.” Yet she is able to convey much without speaking and with other actions. “(F)or though she had not said a word, he knew, of course he knew, that she loved him. He could not deny it. And smiling she looked out of the window and said (thinking to herself, Nothing on earth can equal this happiness)…”. For someone who wanted to keep her children at the same age since they would never be happier, Mrs. Ramsay has found the accumulation of the small moments can overcome the hostility of life.