A Portrait of the Artist as a Young Man discussion: Chapter 5

Of all the alienations, the most painful estrangement for me was Stephen’s distance from his family. Comparing Simon Dedalus’ attitude and actions toward his son at the start of Chapter 5 with their train trip in Chapter 2 (as well as trying to pull strings for him in Chapter 4) highlights the distance between the two. That gap was always there, but the permanence of it is brought home. There are many images of flight and soaring as well as creation in the chapter, invoking the Daedalian myth again, but this is the one chapter in the book that didn’t continually connect with me.

In describing Stephen’s thoughts, Joyce describes them in “brooding” terms, stressing the “in but not of” feeling that the character issues forth. Yet that isn’t quite right, as his friends and schoolmates actively seek him out and he them at times. While there are many ‘swings’ between opposites in this chapter, one that stood out for me was the “cheerless cellardamp and decay” that assails him in the classroom, yet “the dusky verses” of Horace stimulate him with their sweet fragrance. To this point Stephen has become alienated from many things, particularly family and religion. The last major break is with Ireland itself. The Irish Revival movement has taken hold with many of the students but not with Stephen. Stephen has dropped out of the Irish language class and refuses to participate in their political embellishments, pointing out the political failures to date have been from fellow-countrymen. He has made it clear he is focusing on developing the self: “This race and this country and this life produced me, he said. I shall express myself as I am.”

There are many literary references and discussions in this chapter—not that there isn’t in other parts of the book, but they are more overt here. Aristotle and Aquinas are frequently drawn upon, as well as Plato’s method and style. Stephen is trying to transcend what has gone before, yet he acknowledges that language is a sticking point for him. The “turndish” scene with the dean was the one moment in the chapter I really enjoyed. In it, Stephen realizes that

“(h)is [the dean’s] language, so familiar and so foreign, will always be for me an acquired speech. I have not made or accepted its words. My voice holds them at bay. My soul frets in the shadow of his language.”

During one of his literary theory discussions, Stephen works through the qualities needed for beauty that Aquinas lists: integritas, consonantia, claritas, which he translates as wholeness, harmony, and radiance. What happens is that Stephen works to his (Joyce’s?) description of epiphany, where the artist sees the beauty…the soul of something and is able to present it in a way to simultaneously captures a reality and its aesthetics. The epiphany happens not because of the occurrence but the artist’s rendition of it. The image used regarding Stephen’s failure at connecting with Emma (an inability to act over 10 years) highlights the artist’s transformative power: “To him [the confessional priest] she would unveil her soul’s shy nakedness, to one who was but schooled in the discharging of a formal rite rather than to him [Stephen], a priest of the eternal imagination, transmuting the daily bread of experience into the radiant body of everliving life.”

I’ll end my discussion with the book with the quote from Oscar Wilde’s The Picture of Dorian Gray that seems to be behind one of the points Stephen arrives at in his discussions as well as part of the title of the book:

”(E)very portrait that is painted with feeling is a portrait of the artist, not of the sitter. The sitter is merely the accident, the occasion. It is not he who is revealed by the painter; it is rather the painter who, on the coloured canvas, reveals himself.” 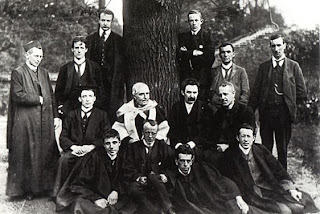 University College, 1900
James Joyce is second from left on the back row
Source
Posted by Dwight at 3:01 PM

This book- it is painfully wonderful. One of those that you have to close and leave for a while, just to muse over it..

I definitely want to revisit this soon...it was overwhelming the first time. Well, it may the second time, too.

Definitely check out the movie if you can--I found it a nice complement to the book.