A Portrait of the Artist as a Young Man discussion: Chapter 4

Chapter 4 begins with Stephen’s religious discipline. One comment I saw for this section is that the language Joyce uses in this section is dry, but the change I notice more is the lack of sensual descriptions (with a few exceptions, made notable because of the lack everywhere else), especially compared to the first two chapters. Early in the chapter Stephen describes his soul and actions ringing a cosmic cash register, recalling the language of the speaker at the end of “Grace” in Dubliners. He does not just deny himself pleasure, but actively seeks discomfort at times in a quest to control and transcend his body. One goal that he has trouble overcoming is “to merge his life in the common tide of other lives,” highlighting his separation from others. In addition, the doubt that he could ever overcome sin gnaws at him, making him wonder if his discipline will be fruitless.

When suggested that the priesthood might be his calling, Stephen’s reactions are comic. He realizes he has secretly mused “accomplishing the vague acts of the priesthood which pleased him by reason of their semblance of reality and of their distance from it.” Within the book there are many similar focuses on the appearance vs. reality theme, or questioning what is the true essence underneath the facade. Another frequent motif shows swings between opposites or portraying opposites against each other. Stephen’s move from frequenting prostitutes to an ascetic religious life, the Christmas dinner where opinions on religion and nationalism displays extreme ends of the spectrum, and his family’s descent from comfort to poverty are only a few examples of this vacillating narrative. One humorous piece in his discussion with the director is Stephen’s assumption that knowledge will magically become available once ordained, knowing religious secrets in addition to learning all the sins that his parishioners would offer in the confessional. The latter echoes the voyeuristic nature of confession that Stephen has encountered when priests inquire into every lurid detail of his sins. He assumes he will be “rendered immune mysteriously” from exposure to such secrets. He also presupposes there will be some transformation at his ordination, the assumption of an epiphany which will enlighten and protect him. He will have an epiphany of course (this is Joyce, after all) later in the chapter but it will not be related to the priesthood.

The “grave and ordered and passionless life that awaited him” if he followed the religious career path bothers him, causing unrest because of the detachment required. He realizes he will sin…fall…but this time there isn’t the doubt that the effort would be fruitless because he assumes he will learn from it. Sensory descriptions begin to come back into the narrative as he heads toward home, where he finds his siblings discussing their impending move due to his parents’ worsening finances. Joyce up to this point has only stressed Stephen’s first name and its relation to the saint. It is here, when Stephen’s classmates tease him about his last name, that his epiphany begin. He first thinks he sees, then feels, the affinity with his surnamesake. Starting with the image of Daedelus soaring aloft and then the comparison of creating art in the workshop, Stephen begins to feel a “call of life to his soul” that is beyond worldly comparison. I would argue the epiphany happens here (and not with the “bird girl") that he realizes what his calling is and what he is meant to do. After all the Christian religious imagery, the change to Greek myth feels somewhat refreshing.

Quickly following that realization is the view of the girl that reminds him of a bird. Once again we have a transformation (harkening to one source of the Daedalian myth, Ovid’s Metamorphoses, which is the epigraph to A Portrait and concerns itself with transformations). But this transformation is different in that her image transforms Stephen, calling something forth from inside him and it is reflected in the lyrical language used to describe the scene. It is an ordinary occurrence yet made into a transformative moment simply because the artist makes it one.

One last word on the epigram: “He turned his thinking toward unknown arts” evokes what the mythical Daedalus did, but out of context it doesn’t capture the why he was driven to do that. Looking at the quote adds the context which makes the choice very ironic.

Meanwhile Daedalus, hating Crete, and his long exile, and filled with a desire to stand on his native soil, was imprisoned by the waves. ‘He may thwart our escape by land or sea’ he said ‘but the sky is surely open to us: we will go that way: Minos rules everything but he does not rule the heavens’. So saying he applied his thought to new invention and altered the natural order of things.

Driven by homesickness, the original Daedalus fashioned wings that he and his son could use to escape from a prison and return home. Much of Stephen’s life has been an alienation from “home” (not to mention his parents’ lack of a stable home, constantly bouncing around due to their financial situation). It is when he turns “his thinking to unknown arts,” to the expression of his soul, can he too escape his prison as well as his home. And it is when Joyce works on unknown arts, he changes the nature of writing. 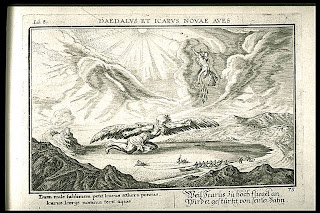 Source
Posted by Dwight at 9:14 PM