A Portrait of the Artist as a Young Man movie

The IMDB page for the movie found here.

I didn’t know what to expect from a movie version of the book. How do you portray everything that happened internally? Internal discourse can be done as a voiceover, but there is so much more happening inside Stephen than just thoughts. Despite some large lapses and omissions, I was pleasantly surprised with the movie. This may have more to do how it complemented and expanded on parts of the book that didn’t connect with me.

It is no surprise that the “external” scenes work the best in the movie. The Christmas dinner, the trip with his father, the retreat sermon, and the artistic discussions all come off well. Some scenes, while good, still miss the power of the written description. Stephen’s confession is an example of this mixed connection, where the movie does well but only touches on his physical reactions and leaves out his fevered search for a church where no one would recognize him. Unfortunately there are near and outright omissions that severely harm the movie—wasting the literary prize money and Stephen’s attempt at a pious life are barely hinted at. Probably the worst moment was the epiphany at the end of chapter 4. His classmates teasing him about his name are completely left out, while the artistic transcendence with the “bird girl” is neither transcendent nor artistic. The moment comes across as simple lust.

The sermon on hell by Father Arnall is wonderfully performed by John Gielgud (simply listed as “The Preacher”). The looks on the students’ faces as they listen to the ugly picture of damnation conveys the fear the sermon was supposed to invoke. Bosco Hogan does a good job as the older Stephen, bland at times but fitting with the descriptions the other students give him. Chapter 5 of the book is given a major part in the film—while the chapter did not always connect with me, I was able to get more out of this part through the movie. There are many light moments in the chapter, but Stephen and his friends convey gaiety in the sections that don’t appear humorous. This immensely lightens up a potentially boring section. Alcohol makes a more pronounced appearance in the movie, never in a way to judge or draw conclusions, but highlighted nonetheless.

I think the movie is a nice complement to the book, but in no way can it stand on its own. Recommended if you are just discovering the book for the first time or would like a quick revisit to parts of the book, but don’t dream of substituting this for the language of Joyce. 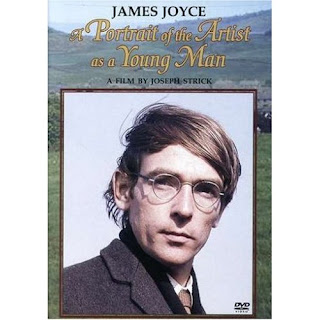 Email ThisBlogThis!Share to TwitterShare to FacebookShare to Pinterest
Labels: A Portrait of the Artist as a Young Man, James Joyce, Movies

How could I not have known this existed?