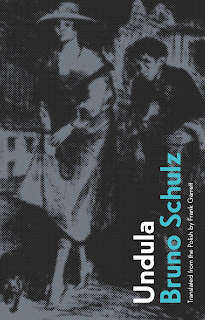 Time trickles with the kerosene lamp's faint hissing. Old equipemnt rattles and creaks in the silence. Besides me in the depths of the room there are the shadows, pointy, crooked in shard, who skulk and cheme. They stretch out their long necks and peer over my shoulder. I don't turn around. Why should I? As soon as I look they'll all quiet down again in their own place, just a floorboard somewhere will groan, the old wardrobe will creak. Everything will go back to the way it was before. Unchanged. And silence once more, and the old lamp will sweeten the boredom with its lulling hiss.

How the lamp fumes. Gray limbs of the candelabrum sprout like a polyp from the ceiling. The shadows collude and conspire. Cockroaches dart noiselessly across the yellow floor. My bed is so long that I cannot see the opposite end. I'm undeniably sick, gravely so. How bitter and full of agony is the way to the thresing floor.
(pages 4, 10)

The available works written by Bruno Schulz would not take up much room on a bookshelf. Two collections of stories, a few essays and reviews, a number of paintings and drawings. In spite of its size, this small collection provides a glimpse at an extraordinary world. A world that is a little demented...definitely askew, but at the same time intriguing. For me there's a similarity at the core between Kafka and Schulz, but they shaped their expressions in different ways.

Schulz's descriptions may detail something we haven't experienced ourselves, but we can recognize things we feel or see in them. Even his death as related by one of Schulz’s Hebrew translators, Yoram Bronowski, provides a pitch-perfect Schulzian description:

In the Drohobycz ghetto Schulz had a protector, an S.S. officer who had exploited Schulz to paint murals on the walls of his house. The rival of this S.S. officer shot Schulz in the street in order to provoke the officer. According to rumor, when they met thereafter, one told the other, ‘I have killed your Jew,’ and received the reply: ‘All right, now I will go and kill your Jew.’

David Grossman goes on to explain that this story may have been used to explain another murder and not Schulz's, but the fact that such a story exists falls into the "metaphsical core" of things that Schulz describes. Especially when his writing is compared to other accounts of his and many others' deaths during that time period in Drohobycz.

Getting back to Undula. This short story was found last year by a Ukrainian researcher named Lesya Khomych in a 1922 edition of a Polish oil journal. The fact that such a journal existed sounds like something out of Schulz's writing. The story's author was listed as Marceli Weron, but the story itself is similar to Schulz's other stories. The title name of Undula is the same as the titles of some of the sexual pictures he drew around this time. There's a maid named Adela, whose name and demeanor are similar to a common character in Schulz's other stories. There are many similar images and words (cockroaches, confinement, polyp) in his other stories, too. The writing style uses (overuses) the repetitive nature of his stories. Fortunately he would refine the use of repetition in his later stories and make the technique more effective.

But there are differences fron those stories, too, that makes "Undula" more than a mere curiosity. The other stories often have a child narrator, which means that anything sexual is described unknowingly (and more effectively, at least for me). Here, sexual tension dominates the story, even if it is still elusive in description. The story relays the thoughts of a man "locked up in isolation," intertwining his description and feelings in his room with the bacchanalia, months earlier, that led to his confinement. Undula is the woman spurning the narrator's advances, causing him to revel in his humiliation.

This short story was published about a decade before his first published stories under his name, and I'm sure plenty of people are scouring anything literary in that gap to see if Schulz may have published anything else under a pseudonym. "Undula" will probably appeal mostly to prior readers of Schulz, but if you've never read his stories this isn't a bad place to start (keeping in mind his other stories are more polished and not as consistently dark or consistently sexual). 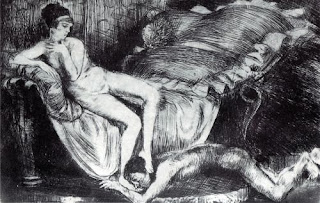 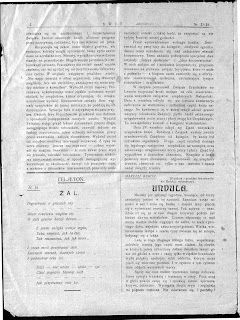 Page from Świt and the start of "Undula"
Picture source

Online release party:
On October 7th, I "attended" the online release party hosted by Sublunary Editions with translator Frank Garrett. Garrett provided quite a bit of background on the dicovery of the story, some of which is in his Afterword, as well as some of the difficulties he faced and choices required with translation. He read some passages, including what was termed as the demonic blowjob scene. While that scene is only part of one sentence, Garrett went into more detail about the difficulty in translating Schulz and, in this case, something with so many grammatical mistakes. Not to mention just flat-out weird. I'm sure that description will get people scrambling for a copy.