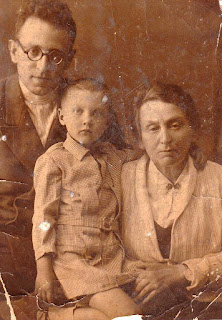 A few minutes ago I received the sad news of the death of Yekaterina Vasilievna Korotkova-Grossman, the daughter of Vasily Grossman. She was someone unusually sensitive, perceptive and witty. We got on well from our very first meeting and I always greatly enjoyed our conversations. At one time in her life she worked as a translator from English. She read through our translation of The Armenian Sketchbook and made many helpful suggestions, not only correcting my misunderstandings of the Russian but also, here and there, coming up with stylistic improvements.
Yekaterina Vasilievna was ninety years old when she died.

In a separate post, Robert links to "a beautiful short memoir the late Ekaterina Korotkova-Grossman wrote about the years she lived in the city Russians call Lvov and which is now becoming known as Lviv." The story is Ukraine: On the Edge of an Empire.

In a 2010 interview, Yekaterina was asked what was the favorite work of her father:

Good Wishes - his account of the two months he spent in Armenia in late 1961. This is his kindest, most good-natured work. I also especially admire "In the Big Ring", one of his very last stories. This, I believe, will last for ever.

Robert Chandler adds: "In the Big Ring" is about a child from an elite family who is rushed to an ordinary village hospital. Acute illness throws the little girl into the company of women from other social classes, broadening and deepening her sense of life. We have not included it in The Road (the selection of Grossman's stories to be published this September by MacLehose Press) because we did not feel we could reproduce the wordplay that is so crucial in this story. But I, too, love Good Wishes - and my wife and I hope to translate it next year.

An excerpt from Good Wishes can be found here.

One last link: a 2010 conversation between Yekaterina and Robert Chandler can be found at the London Review Bookshop Podcast.