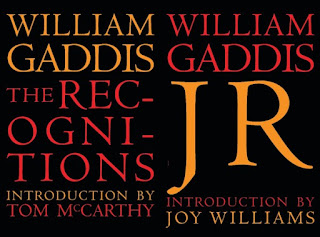 I'm sure most people have seen the news that New York Review Books will release William Gaddis' first two novels, The Recognitions and J R, this fall. From the Publishers Weekly article:

If you're planning on tackling either or both of these novels, I'd like to recommend getting a copy of the audiobooks with Nick Sullivan reading them to go along with reading them yourself. I know, I know. That sounds strange, but trust me it will help you make sense of what is going on, especially in J R. The Neglected Book Page posted on these audiobooks when they were released and he was right: they are phenomenal accomplishments by Sullivan. (Wow, that was ten years ago.)

Also of help for first-time readers (and maybe repeat readers, too) will be The Gaddis Annotations (although I saved that for after I was through with sections of the book), and Gaddis' 1986 interview with The Paris Review.

These are two of my favorite books, so I'm looking forward to the responses of those who decide to tackle these difficult-but-rewarding books.

Update: Chris Via reviews Gaddis' J R at Splice. Reinforcing why listening to the book might be a good idea:

Indeed, with the early scene depicting the rehearsal of the Ring cycle, and repeated invocations of Mozart and Wagner, Gaddis effectively signals that he is conducting an operatic epic so that we, as readers, will not only need to scan his words but also listen to him (as Bast implores J R to do). And, as we listen, attuning our ears to his dialogue, we become acquainted with his characters solely through their voices, which in turn become the book’s leitmotifs.


Another recent post/review of J R is in The Paris Review blog, written by Joy Williams: William Gaddis’s Disorderly Inferno.

Dustin Illingworth has an article at The Point that addresses the two books: Unrecognizable, William Gaddis’s American pessimism. 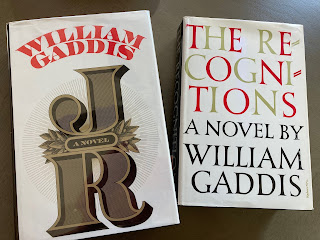