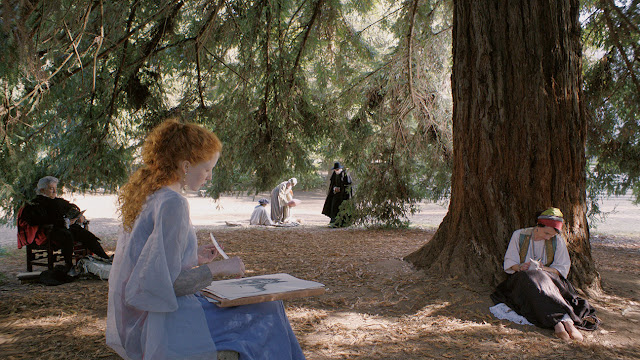 If you enjoy watching out of the ordinary movies and haven't watched the MUBI streaming service, I highly recommend checking it out. I really enjoyed watching Werner Herzog's Family Romance, LLC and several other movies over the past couple of weeks. One film I wanted to highlight is The Portugese Woman, based on a Robert Musil story, which will leave the site in a few days. I'll include a quote from The Hollywood Reporter, which I found fairly faithful to my reaction.

For her latest lavish literary adaptation, Portuguese writer-director Rita Azevedo Gomes revisits a 1924 novella by Robert Musil, the Austrian modernist author most famous for The Man Without Qualities. With its painterly visuals and highbrow pedigree, The Portuguese Woman disguises its lightly surreal and experimental elements beneath sumptuous period-drama trappings. Perhaps too successfully, as it often plods even during its most potentially gripping moments.

... The Portuguese Woman is a classy piece of work, but too traditionally art house to appeal beyond film festivals and specialist connoisseur circles. Despite its high-caliber polish and some inspired casting choices, including Fassbinder veteran and cult screen icon Ingrid Caven, this sluggish historical pageant never quite coalesces into a persuasive, engrossing narrative.

I enjoyed watching it nonetheless (and despite some of the changes from Musil's story), and fancied several other movies which I probably would have not found on other platforms. There are around 30 movies available at one time, with a new movie added each day and the oldest movie dropped from the rotation. The site also has a library, with movies to rent (which I haven't a chance to check out yet) and a Notebook page that has information on the movies selected and films they have produced. If you've checked out MUBI, let me know what you think of it.

I really like MUBI (and get it for free as I work in higher education), but hate it that they no longer tell us when films are going to disappear. Nonetheless, I have seen many films I would not have discovered otherwise and am eternally grateful for that. Beats Netflix, for sure!

Regarding movies rolling off the schedule, I usually watch on the TV app and the 'old' movies move to the right as 'new' ones are added. So as they approach the end of their run, they're at the end of the screen on the right. Plus they sometimes add "1 day left" or "2 days left" to the movie's icon. I don't know how they appear on other platforms, but hopefully it follows a similar type of methodology of having to scroll for the older films.

The recent change with the Library is that often films don't disappear from the site, just from the 30-film wheel ... especially ones that Mubi has distribution rights for. Some of them are for rental, but a lot of the films are free for subcribers.

The problem is that while the Library is available on the website, or in the mobile apps, it is not reachable through the TV apps, which have not been updated. So if you're ok with watching something like The Portuguese Woman on a 6" screen, the option's available.

Mubi's response to the question of when the Library will be available on Roku etc. unfortunately boils down to "when we get to it."

Got it. Thanks for the clarification. That is frustrating.