"Sleep and the Dream" by László F. Földényi at The Paris Review 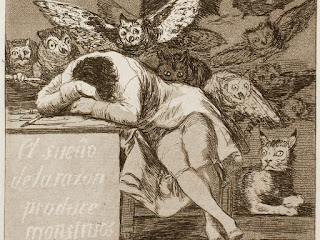 At the risk of overwhelming you with Dostoyevsky Reads Hegel in Siberia and Bursts into Tears, I wanted to relay this complete essay by László F. Földényi at The Paris Review posted last week. I'm only about a third of the way through the collection of essays, and one common theme has been looking at dichotomies, "not so that one side would be necessarily defeat the other, but rather so that an argument for a multiplicity could be made." (Preface, page xiii)

One such split or partition Földényi evaluates is that of the Enlightenment and the religious beliefs it meant to replace. In attempting to set aside one metaphysics, a new type of metaphysics sprang forth, demonstrating "that we cannot exist without metaphysics. Even in a secularized age, as sense of our existence within this universe, for the great wonder of the incomparability and unrepeatability of each moment of every one of our lives." (Preface, page xii)

I hope this intro helps frame "Sleep and the Dream" for you. First Földényi looks at the mystery of what happens when we sleep, positing that maybe sleep allows relationship of body and soul to move more in harmony, or at least be less differentiated. Földényi then looks at Goya's etching El sueño de la razon produce monstruos. The sleep of reason produces monsters.

The ambiguous title allows for several interpretations, questions between reason and intellect (and the area that falls outside each), issues that were not raised before the Enlightenment. Are the monsters an external unknown, or do they represent an internal unknown? Maybe the limits of our knowing which is which inspires us to deal with this confusion. Coincidentally, this is somewhat related to my earlier questions regarding the articles on Walker Railey.

I realize the collection won't be for everyone, but hopefully this essay and introduction to it gives you a taste of what is in Dostoyevsky Reads Hegel in Siberia and Bursts into Tears. I'll post more on it once I finish the book.