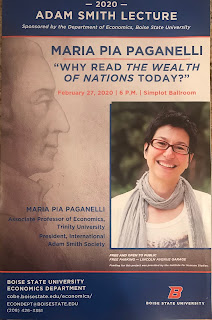 Last night I attended a lecture by Maria Pia Paganelli, president of the International Adam Smith Society. The talk was part of the Adam Smith Lecture Series at Boise State University. Some of the previous years' lectures are described at their site as well as links to recordings of them. It looks like quite the lineup over the past few years, and last night added to the series' quality.

I'm sure there will be a recording available soon, but in the meantime I'll highlight some points in the lecture.

Paganelli began with the question on why we should read Smith's The Wealth of Nations today. Is it because of his ideological positions? Well, Smith doesn't easily fit into any category and would probably disagree with most positions taken today, left, right, whatever. Is it because of his economic analysis? Edwin Cannan, almost a century ago, addressed Adam Smith as an Economist. The professor at the London School of Economics had this to say:

Very little of Adam Smith's scheme of economics has been left standing by subsequent inquirers. No one now holds his theory of value, his account of capital is seen to be hopelessly confused, and his theory of distribution is explained as an ill-assorted union between his own theory of prices and the physiocrats' fanciful Economic Table. His classification of incomes is found to involve a misguided attempt to alter the ordinary useful and well-recognised meaning of words, and a mixing up of classification according to source with classification according to method or manner of receipt. His opinions about taxation and its incidence are extremely crude, and his history is based on insufficient information and disfigured by bias.

Fortunately, Cannan goes on to list three great things Smith did accomplish. Continuing on...should we read Smith for policy prescription? Hardly, since our current economic world hardly resembles that of 1776. So why should be read The Wealth of Nations?

Paganelli quotes E. Weintraub, who makes a startling claim upon reading one of Paganelli's papers, "You make Adam Smith sound like the Bible." Not that his word is gospel, but that it was a living book, something that synthesized differing strands of thoughts. The Wealth of Nations is a book about ideas. Big ideas. And it covers questions we are still asking today. It helps to remember the full title of the book: An Inquiry into the Nature and Causes of the Wealth of Nations. An inquiry. That means Smith asks a lot of questions, many of the same ones we're asking today. It is a living book, one that easily fits into current times as well as any time between now and 1776, and should fit into future times, too.

Paganelli then mentions three of the reasons Italo Calvino suggests on why to read the classics that are relevant when it comes to The Wealth of Nations: it's a book that offers a sense of discovery on each reading of it, it never exhausts all it has to say to its readers, and it's a book that is on a par with ancient talismans attempting to represent the whole universe.

Some of the questions we ask today were asked by Smith in The Wealth of Nations, and he helps frame important ways to try to answer them. Why do we care about justice? How are wealth and justice related? How would a just system, promoting the well-being of humankind, look like when it is a given that man is imperfect? What institutions channel our passions to promote justice and wealth? Why are some of the ramifications of "poor" countries versus "wealthy" countries? What is the role of government in protecting its citizens from injustice?

Smith prods us to investigate how we think about wealth, about how justice interacts with our institutions, and how the government and economy interact. One thing to keep in mind is that Smith viewed The Wealth of Nations as a "violent attack against the whole commercial system" of Great Britain, which was all too often enamored with the glamor of big merchants and manufacturers. He works with big ideas, which why we should return to his big questions and An Inquiry into the Nature and Causes of the Wealth of Nations.

All in all, a most enjoyable evening put on by the Economics Department at Boise State and underwritten by the Institute for Humane Studies. Many thanks to BSU for helping support this series.

Update:
Here's the YouTube video of the lecture. Funny...I look where I thought I was sitting in the audience and don't see me. Hmmmm. Was I really there?

Email ThisBlogThis!Share to TwitterShare to FacebookShare to Pinterest
Labels: Adam Smith, Nonfiction, The Wealth of Nations