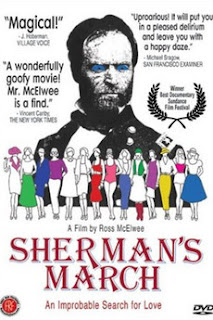 In 1864 during the American Civil War, Union General William T. Sherman began his famous march to the sea. With an army of 60,000 men he swept into the South, destroying Atlanta, Georgia, Columbia, South Carolina, and dozens of smaller towns. His troops plundered homes, destroyed livestock, burned buildings, and left a path of destruction sixty miles wide and seven hundred miles long before finally forcing a Confederate surrender in North Carolina.

Sherman's campaign marked the first time in modern history that total warfare had been waged on a primarily civilian population, and traces of the scars he left on the South can still be found.

Two years ago, I was about to begin shooting a documentary film of the lingering effects of Sherman's march on the South. I'm from the South, and all through my childhood I heard stories about how Sherman had devastated the South. My aunt even keeps a sofa in her attic which is punctured by swords-holes put there by Sherman's soldiers as they searched for hidden valuables. She said she'll never run out of the holes to be sewn up.

Anyway, I had just gotten a grant to make my film, and I stopped off in New York from Boston, where I live, to stay for a few days with the woman I had been seeing. But when I arrived, she told me she'd just decided to go back to her former boyfriend. We argued, and then I left and went to stay alone in a friend's studio loft, which happened to be vacant at the time.
- (Opening lines to Sherman's March: A Meditation on the Possibility Of Romantic Love In the South During an Era of Nuclear Weapons Proliferation )

A friend handed me a collection of Ross McElwee movies while I was recuperating from health issues this summer. I started with Sherman's March, the movie I had heard the most about from film friends, and was easily drawn in to McElwee's slow, deliberate patter. It seemed like a great premise: follow something from history and see how it impacted life today. But what the viewer quickly finds is that the movie is less about what happened from Sherman's march through the south and more about McElwee's life. It's not always a pleasant trade-off.


For a long time, the consensus among my family members was that what I really need to do is find what they call a nice Southern girl and things will be fine.

This is the central point of the movie. His family and friends constantly criticize him, pointing out that they way he dresses, his lifestyle, his grooming, etc. are holding him back, and if he would only act the way he does with a camera when he doesn't have one he would meet and get to know more girls. Time after time we get McElwee's declaration of feelings for someone, only to have things go awry. We do get the occasional comments and insights on General Sherman and visits to historical sights, but even those moments include more information on his feelings and failures at finding a girlfriend. Early in the movie he confides that the movie is really "a meditation on the possibility of romantic love in the South today."

One of the running jokes throughout the movie is the parallels McElwee has with Sherman, or at least he sees it. Both love the south, but feel alienated from it. Until the U.S. Civil War, Sherman was a failure, while until this movie...well, you get the idea. I vacillated between loving and hating the movie, suffering the tedious parts in order to find the gems. One such gem-like moment was his comments on finding Wini on an island off Savannah, Georgia. As they discuss referential opacity, counterpart theory, and other linguistic topics, Winni declares she loves linguistics and sex. To which McElwee deadpans, "My interest in linguistics continues to grow."

We meet blind dates set up for relationships and former girlfriends, only to watch none of them build to anything meaningful. Worse is when we meet Charlene, a former teacher who takes McElwee on as a project for matchmaking. It's funny when someone else is the project, but speaking from experience it's annoying as hell when you're the project, which is why I couldn't stand that part of the movie. Other themes in the movie have to do with his anxiety about nuclear war, his car constantly breaking down, and his so-called nemesis—Burt Reynolds. I guess it is some sort of irony that all of these anxieties are what seem to give meaning to his life.


I've come to the end of my journey with no car, no money, and only one roll of film. What's worse is that I don't seem to have a real life anymore. My real life has fallen in the crack of myself and my film.

McElwee returns to Boston, where he swears off dating and takes a course on music history. Of course he's attracted to the teacher, and the movie ends as he is asking her out on a date. While the movie was supposed to be a portrait of the south and Sherman's impact on it, it ends up being a portrait of the sad state of McElwee's life.

I'm not sure how to comment on the movie. I found it incredibly funny at parts, although I'm usually laughing *at* McElwee instead of with him. That's tempered by the obvious point that he knows that will be the viewer's reaction. My favorite parts are usually the comments from the women he is interviewing, often giving him clues/tips/pointers on what he needs to say to them in order to have a shot at a relationship with her. Which, of course, don't happen (or at least aren't shown in the movie). I recommend the movie as a look at McElwee's style, but I don't know that I can recommend watching all 2 ½ hours of it. You get the point early on in the movie, and it's driven home time and time again. Still, it has it's charm even if it wears thin. When the matchmaker berates him that "This isn't art, it's life!” you get the feeling that McElwee sees no difference between the two.

Having several other movies in the box set, I began watching the next movie and only made it 10 minutes in before quitting. I couldn't take his style any more. Maybe I was watching his movies too close together. Or maybe the quirkiness only goes so far. Your mileage may vary, so check it out if it feels like it might appeal to you. What works in Sherman's March is the timing and deadpan delivery of great lines in strange situations, but I found it wearing thin long before the end of the movie. It is one of those "I'm glad I saw it, but don't ever put me through that again" type of movies, if that's a category.

Links:
The director's page for the movie